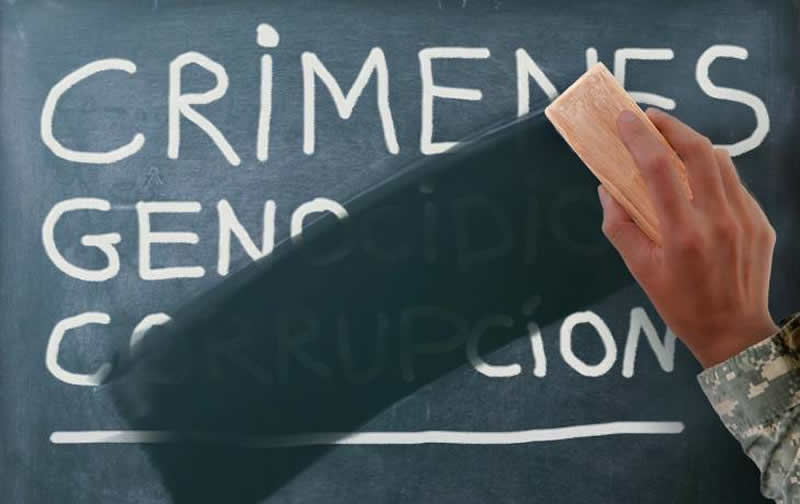 Guatemala is on the verge of a constitutional crisis. One of the things at stake is 30 years of work towards justice for crimes against humanity.

On January 7 President Jimmy Morales, elected in 2015 on an anti-corruption platform after the fall of his predecessor accused of genocide and corruption, decided unilaterally to close the International Commission against Impunity in Guatemala (CICIG). The Constitutional Court ruled this decision illegal and ordered reinstatement of this independent international organization set up in 2006 to assist the Guatemalan authorities in the fight against organized crime and corruption. But the Supreme Court responded by voting to remove at least one judge of the Constitutional Court.

This was a victory for the “pact of the corrupt”, as the opposition calls the pro-government forces in parliament who are trying to obtain laws granting impunity.

All this happened at a time when the president's family, his brother and son, were facing charges of corruption before the courts. That was the first trial to be stopped by the revocation of the CICIG's mandate (which was due to expire in September 2019). This also came a few days before the start of the campaign for presidential elections, scheduled for June. As explained by the Collectif Guatemala, an organization based in France that supports the Guatemalan social and indigenous movement, the presence of the CICIG during the elections would limit the influence of organized crime on the electoral process. And in the event of defeat, Jimmy Morales, who is accused of corruption, would lose his immunity. So the president has no hesitation in sacrificing the last independent institutions, to save those close to him.

With the release of people accused by the CICIG, Guatemalans denounce a return to impunity for political and economic elites. In addition, a controversial draft law proposes amnesty for members of the military prosecuted for international crimes linked to the armed conflict in 1960-1996. This law, if passed, would put an end to 30 years of struggle for justice.

Between 2008 and 2018, the courts issued sixteen decisions, convicting a former rebel and 33 former officers, commanders and paramilitaries for a series of crimes such as torture, enforced disappearances, summary executions, sexual violence, sexual and domestic slavery.

The new law would require their release within 24 hours, along with 14 officers in pre-trial detention for international crimes committed during the armed conflict. It would also allow the return of fugitives fearing prosecution. On January 17, amid applause from former military personnel and their families, a majority of Congress backed a report calling for approval of the bill. The vote is expected in the coming days.

Proposal 5377, introduced in October 2017 by conservative PAN parliamentarian Fernando Linares Beltranena and co-signed by 12 other MPs from Jimmy Morales’s pro-government bloc, aims to scrap or amend the provisions of the National Reconciliation Law, adopted in 1996 in the context of peace accords negotiated under UN auspices. It aims to introduce a “general amnesty” for the two former parties to the conflict.

The National Reconciliation Law guarantees amnesty for political crimes but expressly excludes international crimes like genocide, torture and crimes against humanity. The proposed reform would remove this exclusion. It says that to “attain real peace and reconciliation, there should be a general amnesty for all actors in the armed conflict”. It would pronounce a complete end to criminal responsibilities and application of the principle of non-retroactivity in cases linked to the armed conflict.

The bill clearly seeks also to question the legitimacy of the trials, denouncing prosecutions in which, “in many cases, there are false testimonies, the dubious existence of secret graves is revealed, witnesses are not credible and expert statements are false”. It does not hesitate to call these prosecutions “illegal”.

Listing 71 convictions or prosecutions of military personnel for only one conviction of guerrillas, the bill considers this imbalance as evidence of "a form of witch hunt against one party to the conflict, the military". In fact, the Commission for Historical Clarification (CEH) - a truth commission set up in the late 1990s - found that the State was responsible for 93 per cent of human rights violations during the conflict, with guerrilla responsibility occurring in only 3 per cent of cases. This reality is reflected in the 4,000 cases at the Human Rights Prosecutor's Office accusing the armed forces, compared with 87 cases accusing former guerrillas.

The draft law repeats word for word the arguments of military personnel already prosecuted or convicted in national courts. It accuses "human rights activists" of seeking to extend the application of the crime of genocide to "political ideologies and activism" and asserts that there was no genocide in Guatemala, all victims having been "killed [as] members of the counterinsurgency or insurgent forces, and not because they belonged to a specific ethnic or religious group".

Guatemalan courts have rejected these arguments in many cases. In particular, they have affirmed what was already recognized by the ECH -- that associating Mayan communities with the insurgency was in most cases based on pre-existing racist prejudices intentionally fueled by the State, leading to massive and indiscriminate aggression against their communities regardless of whether they supported the guerrillas or not and seeking not only to destroy the guerillas' support base but above all to break down the cultural values behind cohesion and collective action in these communities.

The power of the old guard

Parliamentarian Beltranena, initiator of the reform, has represented Luis Francisco Ortega Menaldo, a former intelligence officer close to Manuel Callejas y Callejas, former head of the army and founder of the organized crime ring Cofradía who was convicted last May in the Molina Theissen case. Other MPs supporting the bill are close to Jimmy Morales and Otto Pérez Molina, a former president accused of corruption and also for his responsibilities during the conflict in the trial of Ríos Montt, former head of the military junta.

Although Jimmy Morales denies it, many retired officers, including the president of the Guatemalan Army Veterans’ Association -- founded in 1994 by members of the counter-insurgency forces and military intelligence linked to Cofradía and opposed to peace negotiations -- are founder members of the presidential party and funded Morales' campaign in 2015. Their hostility to the CICIG and the trials has always been strong. Morales, entangled in corruption scandals and whose popularity has suddenly dropped, is therefore seeking to mobilize this old guard, which retains considerable power.

With pro-government forces in the majority in parliament (93 seats out of 158), the bill has a good chance of success. On January 17, at first reading, MPs approved the Beltranena Commission's report in favour of the law by 83 votes out of 97 MPs present. This met applause from retired soldiers and families of convicted soldiers in the gallery, including Nana Winters, wife of Benedicto Lucas García, who was sentenced in the Molina Theissen case to 58 years' in jail for crimes against humanity, enforced disappearance and grave sexual violence, and is being prosecuted in the CREOMPAZ case.

An offence against the Guatemalan people

Guatemalan democratic political forces must unite to defend the rule of law. The eviction of CICIG, the failure to comply with decisions of the Constitutional Court and the draft law on general amnesty are three prongs of the same plan to destroy the foundations enabling Guatemalan society to put an end to more than 30 years of armed conflict. To wipe out 30 years of a difficult struggle against impunity, whether for corrupt networks linked to organized crime or international crimes committed during the armed conflict, is to question the very foundations of peace.

The Office of the UN High Commissioner for Human Rights in Guatemala has called on parliament to reject the draft law, calling it "a serious step backwards in the fight against impunity for grave human rights violations". National human rights and victims' associations have also called for its rejection and are mobilizing under #NoAlaAmnistíaNoAla5377. The Molina Theissen family issued a statement calling on parliament to reject this law: "A general amnesty seeking to impose a policy of forgiving and forgetting deeply painful crimes is unjust, doubles the pain of victims and is prohibited by international law,” it says. “This is an offence, not only against our family, but against all the victims, the Guatemalan people and humanity.”