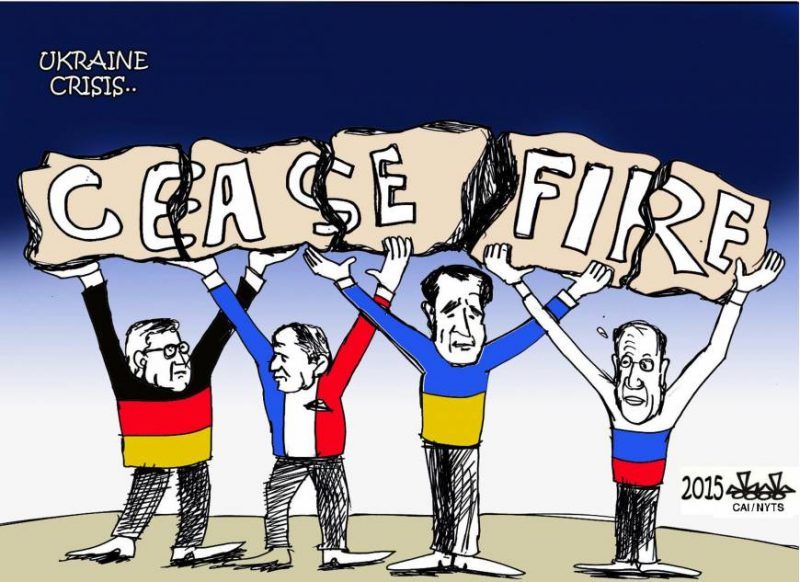 The ongoing turmoil in Ukraine has frequently been compared to the Yugoslav crisis of the early 1990s — and, indeed, there are many similarities.

But when it comes to understanding why the conflict between Ukraine’s government and Russian-backed separatists has persisted — and why, after a year of increasingly brutal fighting, a resolution seems so remote — the differences are far more important.

Russian President Vladimir Putin’s tactics in Ukraine do resemble those of Serbian President Slobodan Milosevic during the breakup of Yugoslavia. Putin’s misuse of World War II references in propaganda, aimed at fueling intense Russian nationalism, is often said to be a cut-and-paste replica of Milosevic’s disinformation campaigns in the early 1990s, which stirred up anti-Croat sentiment among Serbs.

Both Putin and Milosevic empowered ethnic kin in the countries over which they wanted to assert control, before launching military invasions under the pretense of protecting those kin. Finally, both leaders secured the establishment of self-proclaimed “republics” within another country’s borders.

Given these similarities, many argue that Western powers should emulate their approach to ending the crisis in Yugoslavia — and that means providing “lethal defensive military assistance” to Ukraine. After all, it is asserted, the Dayton Agreement that ended the Bosnian War became possible only after the Americans decided to arm the Croats and Bosnian Muslims.

But, of course, Putin’s Russia is not Milosevic’s Serbia. Russia is not a footnote in history or a Balkan mini-state; it is a nuclear great power, against which Ukraine, however heavily armed, does not stand a chance militarily. Given this, providing weapons to Ukraine would exacerbate the bloodletting, without compelling Putin to reconsider his approach and support a lasting peace.

Moreover, the geopolitical context has changed considerably in the last two decades. At the time of the Yugoslav war, the West not only occupied the moral high ground, but was also viewed as invincible, owing to its Cold War victory. Today, the West is perceived as in decline, with America’s legitimacy as a global leader increasingly called into question.

In this context, German Chancellor Angela Merkel is right to oppose arming Ukraine. But she is wrong to assume that negotiations with the Russians can produce a lasting solution like the Dayton Accords, because the conflicts themselves are fundamentally different. Whereas Yugoslavia experienced a local crisis with broader European implications, Ukraine is mired in a European crisis with local implications.

Milosevic had a clear strategic objective: to create a Greater Serbia. To this end, he wanted either to redraw the region’s borders, or at least conclude a deal that gave autonomy to Serbian-majority regions outside of Serbia proper. Negotiations to end the Balkan wars were possible precisely because they centered on maps.

For Putin, the annexation of Crimea was sufficient, in a strategic sense. He is no longer interested in redrawing lines on maps. His actions are not driven primarily by a determination to annex the Donbas region (which is of negligible strategic importance to Russia), carve out a land corridor to Crimea or create a frozen conflict.

Putin remains involved in Ukraine for reasons that seem largely pedagogical. He has a message for the sanctimonious West — and for the Ukrainians who craved entry into its club.

For the West, the message is that Russia will not tolerate meddling in its backyard. In Putin’s view, the West must acknowledge the entire post-Soviet space, minus the Baltic states, as Russia’s exclusive sphere of influence. (The Kremlin’s apparent failure to anticipate China’s refusal to accept such a dispensation — particularly in Central Asia, which is key to President Xi Jinping’s economic vision — represents a puzzling lapse in Putin’s strategic calculus.)

For Ukraine — and its new government, in particular — the message is that the country cannot survive, at least not within its current borders, without Russia’s support. Putin also wants to show Ukrainians that, at the end of the day, the West does not really care about them. Americans will not fight for them, and Europeans will not provide the money that their government so desperately needs.

The West’s motivations in Ukraine, too, seem more pedagogical than strategic: to show Putin that changing borders by force is unacceptable in Europe today. The hope is that economic sanctions, together with Russian casualties on the ground, will force Russia humbly to accept its post-Cold War status as a third-rate power, while sending the additional message that any effort to revise the U.S.-led world order is doomed to fail — with serious economic costs.

Clear strategic objectives enable negotiating parties to concede that half a loaf is better than none. But two sides that simply want to teach each other a lesson lack the common ground needed to hammer out a compromise acceptable to both. That is one reason why today’s negotiations on Ukraine are bound to achieve only patchy, short-lived truces, not the kind of long-term solution that was reached after the Bosnian War.

Stephen Holmes is a professor at New York University School of Law and the author, most recently, of The Matador’s Cape: America’s Reckless Response to Terror. Ivan Krastev is chairman of the Center for Liberal Strategies in Sofia and permanent fellow at the Institute for Human Sciences in Vienna. His latest book is In Mistrust We Trust: Can Democracy Survive When We Don’t Trust Our Leaders? © 2015 Project Syndicate