When generals led by Prayuth Chan-ocha ousted an elected civilian government here in 2014, they vowed to restore order and eradicate corruption. But since seizing power, the junta has become increasingly erratic, incompetent and repressive.

The economy is stagnating. The threat of social unrest is rising. The Prayuth government has recently completed a draft constitution that would ensure real power remains in the hands of the military even after a formal return to electoral democracy.

How to set Thailand back on track is a matter largely for Thais. But America, which has been the dominant foreign player in Thai politics since World War II, can help rein in the junta’s increasingly dictatorial ways by isolating it from its support base among traditional Bangkok-based elites.

During the early years of the Cold War, the United States government threw its weight behind the Thai military and the monarchy, treating them as essential allies in its own effort to turn Thailand into a rampart against communism. American assistance started flowing in the early 1950s, with military aid growing as the Communists gained ground in Vietnam.

By 1966, there were more than 25,000 American soldiers stationed in Thailand. Most American bombing missions were flown out of here, and the annual cost of the bombs dropped over North Vietnam and Laos exceeded the size of the Thai economy at the time. 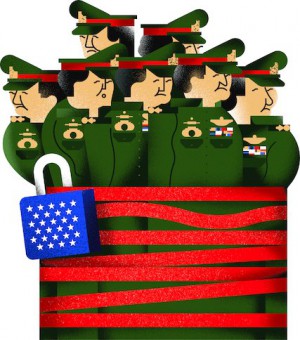 Meanwhile, Washington turned a blind eye to abuses and corruption. The Thai military exaggerated the Communist threat at home to curb dissent, sometimes resorting to political killings and summary executions. Gen. Sarit Thanarat, a staunch American ally who ruled from 1957 until his death in 1963, is said to have amassed over $100 million. Senior generals were involved in the trafficking of drugs grown in northern Thailand and bordering regions.

America’s patronage diminished with the end of the Vietnam War, but its effects remain today. The leaders of the 2014 coup, who came of age during the 1960s and 1970s, appear to look on democracy like they once did on Communism: as a foreign ideology that threatens the network of Bangkok-based royalist elites they were trained to protect.

The generals abhor the alternative power network centering on Thaksin Shinawatra, a telecommunications tycoon turned politician, that emerged in the wake of the 1997-1998 Asian financial crisis. Elected prime minister in 2001, Mr. Thaksin pursued various economic programs catering to the rural poor. This brought him widespread popularity, which meant he did not need to rely on traditional military and royalist patronage networks. Partly for that reason, the army deposed him in 2006; in 2014, it was his sister Yingluck, elected in 2011, who was ousted. (In both instances, the palace promptly recognized the military governments that took over.)

The military’s methods today also reflect the legacy of past American involvement. The Thai army’s Internal Security Operations Command, which recent military governments have relied on to clamp down on critics, is an offspring of the Communist Suppression Operations Command that was created with Washington’s assistance in the 1960s. Both outfits were implicated in Cold War-era atrocities.

Counterinsurgency and psychological warfare tactics, a centerpiece of American-Thai cooperation in the 1950s and 1960s, inform the junta’s campaign of “returning happiness to the people.” That program also largely amounts to spreading nationalist and royalist propaganda. It subjects critics of the Prayuth government to “attitude adjustment” — junta-speak for harassing, detaining and, some say, torturing detractors.

Yet the United States has done little so far to curb such excesses or pressure the junta into relinquishing power, aside from making an occasional critical statement and freezing a few million dollars in military aid.

The annual American-Thai joint military exercises known as Cobra Gold have continued to be held, if in reduced form, since the coup. Last month at the United States-Asean summit meeting in California, even as President Obama said that America continued “to encourage a return to civilian rule” in Thailand, he posed for chummy photos with General Prayuth.

Washington instead should isolate the Thai military from its traditional backers to deprive the junta of a crucial source of legitimacy and support. Acting with the European Union, Japan and other allies, America should penalize not only the generals involved in the 2014 coup, but also the civilians the government has appointed to its rubber-stamping institutions.

The United States is in a strong position to do so. Wealthy Thais have shoveled assets overseas at an astonishing rate since Mr. Thaksin was brought down in 2006. Their annual investments abroad have increased twelvefold, according to the Bank of Thailand, and now equal one-third of Thailand’s G.D.P. Because of longstanding financial and personal ties to the West, much of this wealth is in the United States and European Union countries.

The junta has been busy deepening economic and military ties with Beijing. But its “China card” is too weak to offset Washington’s continued importance. Thailand’s primary security concerns — terrorism, refugees, a Muslim insurgency in the south — are still best served by cooperating with the United States. And if the country’s conservative elites have fallen out of love with democracy, they continue to favor the West over China for their investments, their children’s education and their holidays.

Taking advantage of this exposure, the United States should lead an effort to subject these elites and the generals involved in the 2014 coup to restrictions on travel and financial transactions.

According to a 2014 update of a classic study published by the Peterson Institute, 16 of the 35 sanctions programs deployed from 1970 to 2014 that were aimed at “modest policy change” were successful. The study also showed that such measures work better when their goal is moderate and when they are used to pressure otherwise friendly governments, rather than enemies.

The sanctions we propose are not aimed at imposing regime change. Their goal is to accelerate Thailand’s return to electoral democracy, which the junta claims to want, and under a system in which elected governments are free of military interference. Thailand’s 1997 Constitution, which is widely seen as the most pluralistic in the country’s history, could serve as a guide.

For decades America buttressed the Thai military to advance its own interests, at the expense of Thailand’s democratic development. It’s now time it try fixing the problem it helped create. As Thailand’s most influential ally, the United States should do what it can to stop the junta from setting the country back any further.