“The place of those who have ceased to rule is to teach,” V. S. Pritchett wrote of Spain in 1954, as the British Empire was collapsing around him. By the end of the 20th century, Britain had long since ceased to rule. But in India, where I grew up and which had been a British colony for nearly 90 years and subject to its growing influence since the 1700s, it continued to feed us in myriad ways. The phantom limb of empire outlasted Britain’s physical presence; we felt ourselves bound, as if by an invisible cord, to our former colonial masters. It wasn’t just the side of the road we drove on, our army and our system of government. Britain was part of our cultural heritage.

From the books we read — Enid Blyton and the Biggles adventure series as children; Evelyn Waugh, Graham Greene and W. Somerset Maugham as adults — to the way we organized our schools and examinations, our spellings and pronunciations, Britain exerted tremendous influence. Britain was the place where we aspired to go to university. If there was a big international news story — the civil war in Sri Lanka, say — it was to British newspapers and radio that we turned for credible information and analysis. The British seemed more knowing than their American counterparts, less provincial. They were at home in the world. Their history of empire made them a kind of cultural pivot in the Anglophone world.
This was even truer for the republic of letters. Since the time of Joseph Conrad, Britain had been able to recognize new voices and project them beyond its borders. British critics, editors and literary agents were better positioned to judge foreign writing than American ones. And for well over a century, Britain was the place where African and Asian writers, like myself, would come, be understood and hope that our talent would be broadcast to places with bigger readerships, like America. A roll call of great writers — V. S. Naipaul, Salman Rushdie, Chinua Achebe, J. M. Coetzee — owe their existence to Britain as the supreme arbiter of writing from farther shores.

Now may be the first time in a hundred years this is no longer true. I had an experience the other day that made me realize how much the shape of my world had changed. My British publisher, with which I’d been working since the beginning of my writing career nearly a decade ago, wrote to say it could no longer publish my books. It praised the new work on submission, cited the low sales of past work and then told me that “the market has changed.”

What had changed? Brexit, of course. Two years ago this week, a slim majority of the British people voted to make their country more isolated, less worldly. While the exact contours of Britain’s exit from the European Union are still being debated, the shock of the country’s retreat from the wider world is being felt acutely.

It ought to have been devastating news, a literary death sentence. For a writer as myself, with a colonial background and a home market in India that could not wholly support him, Britain had played a key role in terms of prestige and influence. British publishers, operating out of norms that were as anachronistic as they were offensive, often demanded “commonwealth rights” of colonial writers. We surrendered them unthinkingly, believing Britain to be the keystone to our success. It is only now with Britain out of my life that I can see how the vestiges of a colonial mind-set had led me to exaggerate the country’s influence. For long before Brexit, my cultural moorings had been shifting in accordance with a new reality: America had stepped in to fill the void left by Britain. 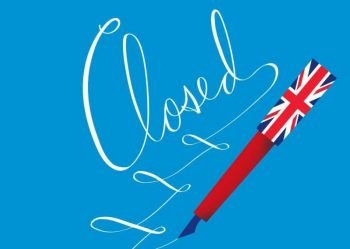 It was America where we now aspired to go to university; American magazines and newspapers that we went to for information about world affairs; American literary agents and publishers that were prepared to publish what Britain no longer could. India, in the meantime, had also grown by leaps and bounds, and could support its own writers as never before. It was just Britain that had fallen out of the equation. It was as if the post-empire glow, like light emanating from a star that has died, had finally gone out.

To my surprise, I have found myself mourning the part Britain had played. As a colonial power, Britain was abhorrent; but in the past 50 years, as its real power shrank, it played an outsize role in the transmission of culture through the English-speaking world. In America, where I went to university and where I now live part of the year, I am constantly aware of the tremendous cultural distance from India, which a shared familiarity with English can conceal. Britain, in its 20th-century avatar as a translator between different English-speaking societies, made it easier to join the dots. It created an atmosphere of cross-pollination in the Anglophone world that gave, and continues to give, us people as far apart as Trevor Noah and Arundhati Roy, Wole Soyinka and Zadie Smith

Britain, as an intermediary, could often be patronizing and superior. The British demanded exotica from Indian writers, as if it was our job to falsify the reality of our places for their entertainment. In America, one is free of colonial baggage. But it was also true that in America one had to make the case for why the country should care about any given issue in the world beyond, which usually meant, “How does it affect us?” Britain, with its colonial past, seemed almost obliged to care. Freed of imperial possessions, and yet effortlessly cosmopolitan, Britain escaped the fate of so many larger countries. What Borges said of big countries could easily be applied to both India and the United States: “The writer who was born in a big country is always in danger of believing that the culture of his native country encompasses all his needs. Paradoxically, he therefore runs the risk of becoming provincial.”

Britain had the opposite experience. It was a small island country that flowered in its contact with other cultures. But it seems now that after three centuries of growth and expansion, the British mind is finally catching up with its new shrunken place in the world. Brexit is only a symptom. The shrinking disease is not political but cultural, and as such it expresses itself in all variety of ways.

The signs were there well before Brexit. In 2011, James Wood, a Briton himself and The New Yorker’s house critic, saw provincialism at work in the overrefinement and cloying nostalgia of writers like Alan Hollinghurst. He rightly faulted Mr. Hollinghurst for being “too ready to perpetuate a fond English elegy that he should, instead, be scrutinizing.” The shrinking disease is there in the longing for rootedness, which public intellectuals like David Goodhart, my old editor at the magazine Prospect, expresses as the difference between cosmopolitan “anywheres” and “somewheres” with “rooted” identities based in “group belonging and particular places.” It is there especially in the willful provincialism of Prime Minister Theresa May who famously said, “If you believe you’re a citizen of the world, you’re a citizen of nowhere.”

As an unapologetic “anywhere,” I am in the grip of a nostalgia of my own. I find myself composing an elegy for that brief interregnum when Britain had ceased to rule but was nonetheless dazzlingly cosmopolitan. “European rule in Asian countries was based on force,” Arthur Koestler wrote in “The Lotus and the Robot,” “but its cultural influence was not.” He added, “We ruled by rape, but influenced by seduction.” As Britain withdraws into itself, I cannot help feeling we are going to miss that last benign act of British power when the rape fell away, and seduction remained.

Aatish Taseer is a contributing opinion writer and the author, most recently, of the novel The Way Things Were.