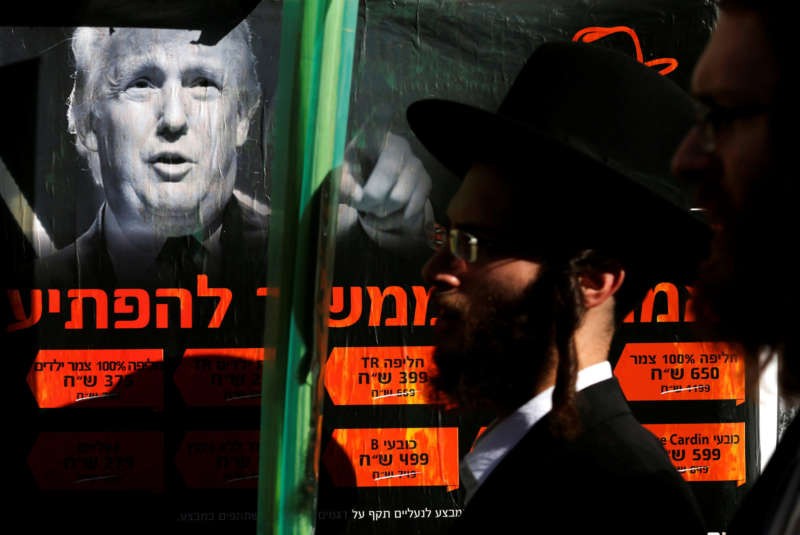 The day before Americans voted for their next president, I met with Representative Debbie Wasserman Schultz in the area she knows best — her district in southern Florida.

It is a heavily Jewish area, and Ms. Wasserman Schultz was dressed the part. The pin she wore on her jacket said “Ani Ita,” Hebrew for “I’m with her.” I have no idea how many of the Jews sitting in the coffee shop where we talked were actually able to understand the words, but I’m sure most of them could identify Hebrew letters, and hence associate the congresswoman with their Jewish culture.

Persuading Jewish voters in Florida to vote for Hillary Clinton was not nearly as hard as it was to persuade them to vote for Barack Obama eight and four years ago. Ms. Wasserman Schultz told me that Jewish voters trusted and loved Mrs. Clinton, and had few doubts about her.

The congresswoman seemed to be right: Exit polls indicated that 71 percent of Jewish voters cast their ballot for the losing Democrat. In Florida, according to a poll commissioned by the organization J Street, 68 percent of Jews voted for Mrs. Clinton.

So it seems that most Jewish Americans are in the losing camp. Seventy-two percent of Jews have an unfavorable view of the winning candidate, Donald J. Trump, according to another J Street poll. Some Jewish organizations clashed with Mr. Trump — denouncing his words against Muslim immigrants and arguing that his campaign encouraged anti-Semitic language. When the American Israel Public Affairs Committee asked Mr. Trump to speak at its policy conference, some critics called the invitation “shameful.” In word and deed, Jewish Americans — even many Republican-leaning Jews — steered clear of Mr. Trump.

Now Mr. Trump has been elected president. And Israel, while surprised by his rise, is quickly getting used to this new reality. Israeli Jews, like their American counterparts, would have preferred a Clinton victory and were somewhat suspicious of Mr. Trump’s erratic ways.

Then again, the president-elect says that he supports Israel, he seems to have amicable relations with Prime Minister Benjamin Netanyahu, and he has surrounded himself with people like Rudolph Giuliani and Newt Gingrich, who are well known for their friendship with Israel. What’s not to like?

If all goes well, Israelis are going to love the Trump administration. Mr. Trump seems uninterested in pressuring Israel to give away land and he has promised to move the United States Embassy from Tel Aviv to Jerusalem, a longtime request by Israel, which views Jerusalem as its capital. His view of the international agreement on Iran’s nuclear program is as bleak as Israel’s, and he vowed to make it a priority to “dismantle the disastrous deal with Iran.”

If his policies match his campaign rhetoric, Israelis, with time, will grow to like him. American Jews, meanwhile, will seethe. Israel is dear to the hearts of most American Jews, but it is not a main political consideration when they vote in America. Fewer than 10 percent of them cite Israel as one of the most important issues in deciding for whom they vote.

American presidents like Mr. Bush, Mr. Obama and Mr. Trump are bad for relations between Israel and Jews in the United States. They lay bare the fact that American Jews and Israeli Jews have different sets of priorities and values. These presidents underline the understandable, if unfortunate, reality that Jewish Americans prioritize Israel quite low as they vote — and that Jewish Israelis do not care about the political sensitivities of American Jews.

At times, this becomes contentious. Such was the case when some Jewish American groups debated whether their opposition to President Richard M. Nixon ought to be tamed because of his support for Israel during the 1973 Yom Kippur War. Such is the case when Israel knows that Jewish Americans are wary of certain leaders of the evangelical religious right, and yet accept their political support without many reservations.

What will happen if American Jews see the good relationship that President Trump has with Israel? It will make many of them uneasy. It will make them doubt Israel’s values and morality. It will alienate them from Israel.

What is going to happen if Israeli Jews see American Jews oppose President Trump at every step? It will make the Israelis question the Americans’ good judgment, and doubt their commitment to Israel’s security.

Shmuel Rosner is the political editor at The Jewish Journal, a senior fellow at the Jewish People Policy Institute and a contributing opinion writer.