Can Angela Merkel Be the Next Leader of the Free World?

Consider the following sentences. First: “Let every nation know, whether it wishes us well or ill, that we shall pay any price, bear any burden, meet any hardship, support any friend, oppose any foe to assure the survival and the success of liberty.”

And second: “I call ... upon Russia to use its considerable influence over separatist leaders to stop any form of military, political or financial support. ... Those responsible for the escalation must stop their hostile actions and live up to their commitments.”

The first was spoken by John F. Kennedy in his 1961 Inaugural Address. The second came from the European Union’s foreign policy chief, Federica Mogherini, after Russian-backed rebels shelled the Ukrainian city of Mariupol last month, killing 30 people. Kennedy’s sentence is a statement of Western self-confidence. Ms. Mogherini’s is shot through with self-doubt. The 1961 sentence rings with moral certainty; the 2015 one is a nod to legal provisions, cautious even by the standards of modern diplomacy. There is a dangerous side to this new self-restraint. Just how hollow and cold, I ask myself, has the West become? 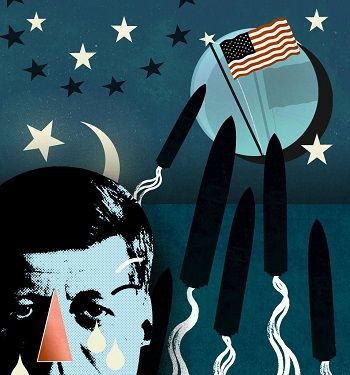 Ms. Mogherini’s comment comes at a time when the idea that the spread of freedom — democracy, market economy, equal rights for men and women — will lead to a more open and just world is losing its universal appeal. A corroding skepticism is undermining the West. I hear it in political circles and at private dinner tables when people say that what happened in Ukraine was Europe’s and America’s own fault. You see it in the banlieues of Paris and the migrant quarters of Berlin, where religious absolutism is taken as superior to pluralism. You run into it on billboards and in bookstores, filled with signs saying stop the Trans-Atlantic Trade and Investment Partnership, which so many perceive as another imperial attack on their cultural heritage.

The Greeks have just voted in a government of radical left- and right-wing forces united in their hatred of globalization. Last year the country’s new defense minister, a member of the far-right Independent Greeks party, said Jews don’t pay taxes. And the Hungarian prime minister, Viktor Orban, recently announced that he wants to build an “illiberal democracy” modeled on Singapore and China.

Our enlightened societies have been struck by an autoimmune disease. Two fundamental virtues of the West, doubt and conscience, are turning against their inventors. “Sapere aude,” or “dare to know,” the courage to put into question any reputed certainty, has been the basic formula of progress and human development. We’ve fared pretty well with this principle, from Martin Luther to the moon landing and gene therapy. After the fall of Communism, the West came to believe this impressive performance was reason enough for others to follow the same philosophical and political path.

Then came a series of major blows. A “war on terror” revealed America’s historic mission to spread democracy as hubris. A financial near-collapse mocked the promises of market liberalism. And the euro crisis shattered the prophecy, offered by generations of European elites, that Continental integration was a safe path to prosperity and harmony.

Many Westerners today do not even ask what went wrong with their system; instead, they question the system itself. In other words, the legitimacy of the West is contested by the very skepticism it holds so dear.

The complexity of today’s interconnected world permanently strains our intellectual capacity (and that includes journalists). Gut feelings start to replace fact-finding, truth has yielded to truthiness, and there’s a growing demand for scapegoats — the prime one, at least on this side of the Atlantic, being the big, bad United States.

Russia was the first to diagnose this autoimmune disease. As early as 2007, in a now-infamous speech in Munich, its president, Vladimir V. Putin, tried to capitalize on this shaky ground by espousing a potent blend of nationalism and religious orthodoxy as a fixative for Western doubt. Russia also exploits the second virtue of the West: its guilty conscience. This is what nourishes a popular belief, particularly in Germany, that Moscow’s behavior in Ukraine is not aggression, but rather a reaction to our enlargement of NATO at the expense of Russia’s former greatness.

It is no coincidence that this new self-flagellation coincides with the digital age. The Internet is the finest tool ever created for spreading information and sharpening thoughts. But it is no less suited for disinformation and distortion. Psychological destabilization today works more smoothly and quickly than ever before, and it is always easier to tear down than to build up. We may still live in one nation, but the numbers of realities we inhabit are increasing.

What the West urgently needs is a dose of the Kennedy spirit, because a system’s legitimacy can be lost quickly once its representatives lose faith in its pursuit of what’s right.

But who can deliver this spirit? Barack Obama won’t: He lacks sensitivity toward both Russia and the critical mood in Europe, calling Russia a “regional power” and declaring arms deliveries to Ukraine to be counterproductive. David Cameron can’t: He’s too angry at both the European Union and Russia to be credible as idealist. François Hollande is busy holding France together. The only candidate left, I believe, is Germany’s chancellor. Angela Merkel: leader of the free world?

She would never accept the title. Yet she could be forced into the role, just as she was reluctantly forced into being the leader of Europe. And there are signs that she is aware of — and ready to accept — the burden. Her statements on Russia (it must pull back from Ukraine, or face further isolation) and Islam (it belongs to Germany but must modernize) are becoming increasingly strong. Most important, she has no illusions about the seriousness of the intellectual attack on the West, and its vulnerability. At the Munich Security Conference last weekend, she devoted a good part of her speech to what she called the “unsettleability” of Western society.

That’s a good start. But she will need to be even clearer against all the fringes that long to become the new center.

In doing so, she should let herself be inspired by the wisdom of one of her predecessors, Otto von Bismarck, who once remarked: “The strong one is occasionally weak because of his pangs of conscience; the weak one is strong because of his brazenness.” Some truths indeed are timeless. Let us not be shy. The West can master its autoimmune disease. But to do so, it must balance its conscience with just a little dose of brazenness.

Jochen Bittner is a political editor for the weekly newspaper Die Zeit.