In a Sunday Review essay last weekend, David Reich, a geneticist at Harvard, argued that science is changing how we think about “race” and urged a candid discussion of the findings, whatever they may be. Hundreds of readers left comments, many expressing worry about the possibility that the results could be misinterpreted or nefariously applied. Here are Dr. Reich’s responses to some of the comments. — The Editors.

Unfortunately, science has always been misused. From slavery, to eugenics, to economic Darwinism, to anti-abortion politics, the latest scientific knowledge has been employed in the service of evil. The idea of forestalling such efforts is valiant but fruitless. Science must continue its pursuit of truth, and scientists, as always, must speak out when their discoveries are exploited for harmful purposes. — Syfredrick, Providence, R.I.
We scientists always need to keep in mind our social responsibilities and to think about whether what we are doing has positive or negative effects on our world.

With respect to today’s study of human variation, I am optimistic — I believe that it has been socially positive. It is making every racist view of the world untenable. In my just-published book, I explain how the ancient DNA revolution — which has provided far greater power to reveal what happened in our deep past than what was available before — has done far more to undermine racist beliefs than to support them. As I wrote in the final paragraph of my book:

The study of human variation has not always been a force for good. In Nazi Germany, someone with my expertise at interpreting genetic data would have been tasked with categorizing people by ancestry had that been possible with the science of the 1930s. But in our time, the findings from ancient DNA leave little solace for racist or nationalistic misinterpretation. In this field, the pursuit of truth for its own sake has overwhelmingly had the effect of exploding stereotypes, undercutting prejudice, and highlighting the connections among peoples not previously known to be related. I am optimistic that the direction of my work and that of my colleagues is to promote understanding, and I welcome our opportunity to do our best by the people, ancient and modern, whom we have been given the privilege to study.

My book also gives concrete examples of how it is no longer so easy to twist science to support long-cherished stereotypes because ancient DNA is now debunking the stories that used to be made up about the nature of human variation. As I wrote there:

The Nazi ideology of a “pure” Indo-European-speaking Aryan race with deep roots in Germany, traceable through artifacts of the Corded Ware culture, has been shattered by the finding that the people who used these artifacts came from a mass migration from the Russian steppe, a place that German nationalists would have despised as a source. The Hindutva ideology that there was no major contribution to Indian culture from migrants from outside South Asia is undermined by the fact that approximately half of the ancestry of Indians today is derived from multiple waves of mass migration from Iran and the Eurasian steppe within the last five thousand years. Similarly, the idea that the Tutsis in Rwanda and Burundi have ancestry from West Eurasian farmers that Hutus do not — an idea that has been incorporated into arguments for genocide — is nonsense. We now know that nearly every group living today is the product of repeated population mixtures that have occurred over thousands and tens of thousands of years. Mixing is in human nature, and no one population is — or could be — pure.

Having been immersed in the ancient DNA revolution for the past 10 years, I am confident that anyone who pays attention to what it is finding cannot come away feeling affirmed in racist beliefs. My childhood guesses about who we are and how we’re related to one another — and about the nature of differences among people — have been shown to be wrong again and again.

As Hamlet says to his friend in Shakespeare’s play, “There are more things in heaven and earth, Horatio/Than are dreamt of in your philosophy.” And that’s what the ancient DNA revolution is reminding us repeatedly. Anyone who thinks they can guess what the nature of human variation is based on the data we had available to us before these breakthroughs is wrong.

I think the most important point in the article, that could’ve been emphasized a bit more, is that differences in individuals are far greater than that of populations.

When those who use the stats of the average I.Q. justify that for racist ideologies, they seem to fail to recognize the fact that there is massive variance from the average of all races. As well as the fact that institutional discrimination also has a negative impact on I.Q. of populations, which when those factors are controlled (education, economic upbringing, even being adopted and raised by parents who are of a different race), leads to even less substantial difference in even the average I.Q. of populations.

Indeed, we have known for almost a half-century that for the great majority of human traits shaped by genetics, there is far greater variation among individuals than populations.

This means that when a teacher looks around a classroom of students of diverse “races,” she or he shouldn’t see them as members of fundamentally different groups of people. “Race” has trivial predictive power about an individual person’s biological capabilities. Even if there are slight average differences among groups of humans, individuals from any group are capable of excelling in any realm.

“It is important to face whatever science will reveal without prejudging the outcome and with the confidence that we can be mature enough to handle any findings.” Fat chance. What if many stereotypes are, in fact, confirmed by genetic research? What is the likelihood that ideologues of the left and right will have the maturity to handle it? Nonexistent. — BarrowK, North Carolina.

It is likely that a few stereotypes will be validated by findings from genetics — even if it is also certain that a great majority will be disproved. When this happens, the findings will certainly be used in sound bites by people who, for whatever reason, need to believe that racist views of the world have been correct all along. Well-meaning people need to prepare for this possibility, which is exactly the issue I tried to grapple with in my article.

So how should we handle the eventuality that for a few traits, average differences among populations arising from genetics will be discovered? I do not think that the right approach is to pretend that scientific research has shown there can be no meaningful average genetic differences among human populations, because that message is contradicted by scientific facts.

The key point is that whatever science finds should not affect the way we behave toward one another. Whatever small average differences across groups might exist (and genetic studies have already made it clear that average differences across populations are much less than those between individuals), we are members of a single species, all of whom must be given every opportunity to flourish in every realm. 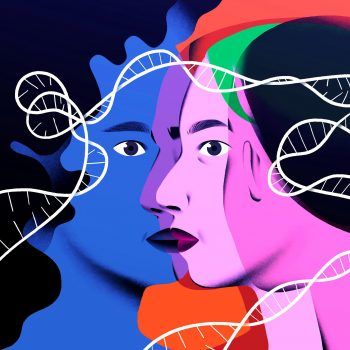 I agree with the gist of what is being said here. I’m not sure, though, that we are prepared to have this conversation. For several years I taught a segment of a course on “intelligence.” It was challenging and interesting. We explored controversies, and we raised all the questions about population differences. We read not only scientific treatments of the notion, but we also read poetry and fiction that explored the nature and value of “intelligence.” I stopped teaching it recently. It’s just too risky given the current environment in the universities.

I appreciate the courage here, and I hope the intellectual environment shifts so that we can properly prepare ourselves for this discussion. — Nathan, San Marcos, Calif.

From my point of view, it should be possible for everyone to hold in their heads the following six truths:

1. “Race” is fundamentally a social category — not a biological one — as anthropologists have shown.

2. There are clear genetic contributors to many traits, including behavior.

3. Present-day human populations, which often but not always are correlated to today’s “race” categories, have in a number of instances been largely isolated from one another for tens of thousands of years. These long separations have provided adequate opportunity for the frequencies of genetic variations to change.

6. To insist that no meaningful average differences among human populations are possible is harmful. It is perceived as misleading, even patronizing, by the general public. And it encourages people not to trust the honesty of scholars and instead to embrace theories that are not scientifically grounded and often racist.

In short, I think everyone can understand that very modest differences across human population in the genetic influences on behavior and cognition are to be expected. And I think everyone can understand that even if we do not yet have any idea about what the difference are, we do not need to be worried about what we will find because we can already be sure that any differences will be small (far smaller than those among individuals).

As a society, we are already committed to giving everyone a full opportunity for self-realization — regardless of the particular hand each person is dealt from the deck of life. Since we are already committed to this, accommodating any slight differences in the average genetic influences on traits that might eventually be found should only be a little extra work to handle.

David Reich is a professor of genetics at Harvard and the author of the book Who We Are and How We Got Here: Ancient DNA and the New Science of the Human Past.