Zelensky’s unorthodox path to the presidency has made headlines around the world — but there’s another story here. The pattern of support for Zelensky is distinctly different from the East-West divide that has characterized Ukrainian politics over the past 20 years.

Analysts often depict Ukraine’s politics as a constant struggle between a pro-European West and pro-Russian East. There’s more to this analysis. The Kiev International Institute of Sociology classifies Ukraine as having four macro-regions based on shared cultural, economic and historical ties: the East, West, Center and South. 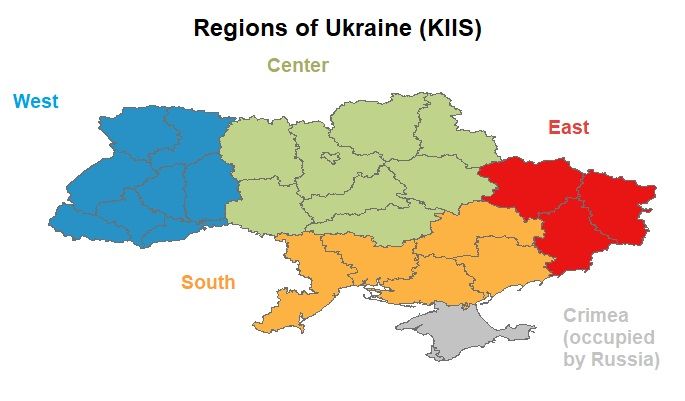 The East has a large ethnic Russian population. The West is staunchly nationalist — the Soviet Union annexed much of this region after World War II, and there was a long insurgency against Soviet rule. Issues relevant to these two regions characterized Ukrainian politics for the first decade of the 21st century.

Ukraine’s 2004 and 2010 presidential elections revolved around Russian and E.U. visions for Ukraine’s international orientation. In 2010, Viktor Yanukovych represented the more pro-Russian wing, while Yulia Tymoshenko was on the pro-European side. 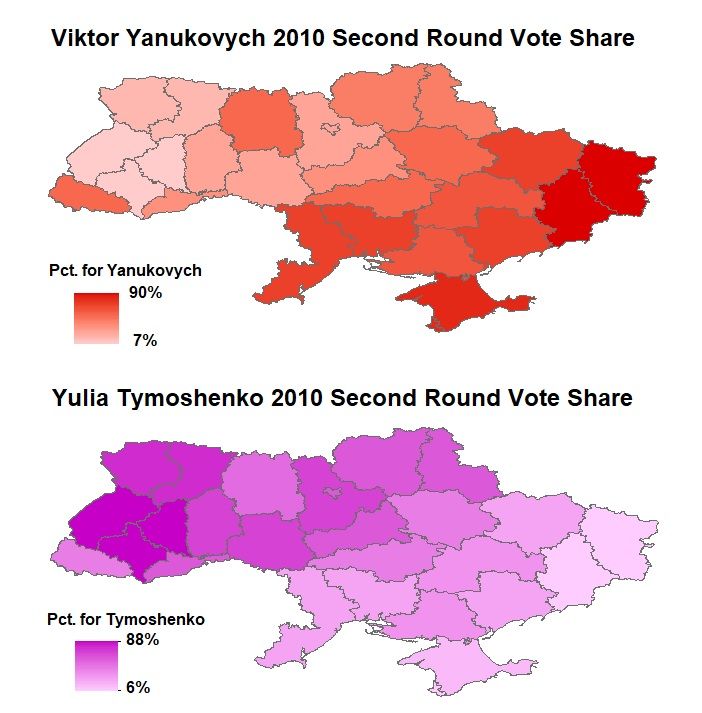 Voters in the South mostly backed Yanukovych, and those in the Center backed Tymoshenko, but there are considerable differences among the regions. The South is populated mostly by Russian-speaking ethnic Ukrainians. Support for pro-Russian politicians was relatively strong there before Ukraine’s Maidan Revolution. Unlike in Eastern Ukraine, there was comparably little support for secession in any of the regions of the South, except Crimea.

The Center of Ukraine also differs considerably from the West. The region spent more time under Soviet control and experienced much of the population die-off associated with the Holodomor famine in the 1930s. The region is primarily agrarian and ethnically and linguistically Ukrainian, but not as nationalist as the West.

But the Center and the South together make up over half of Ukraine’s total population. A candidate who could mobilize voters from the South and Center could overcome the polarization between the East and West.

Here’s what just changed: Zelensky broke the East-West stranglehold on Ukrainian politics. The map below shows the percentage of votes Zelensky received in each Ukrainian electoral district in the first round of the 2019 presidential election.

Zelensky drew his greatest share of support from the South, especially his hometown of Krivoy Rih and the surrounding Dnipropetrovsk Region. The next best region for him was the Center, particularly around the capital, Kiev. His lowest levels of support came from the parts of the far-eastern regions of Donetsk and Lugansk that participated in the election, and the three regions in the West: Ivano-Frankovsk, Lviv and Ternopil.

So what happened? In part, Zelensky’s rhetoric resonated with voters across Ukraine. However, just as important was a shift in popular attitudes against the divisive rhetoric of previous campaigns.

Zelensky ran as neither a pro-Russian nor an explicitly nationalist candidate. While Zelensky primarily spoke Russian during his campaign, he underscored the importance of Ukrainian-language education for future generations. Zelensky also proposed direct negotiations with Russia over its occupation of Crimea and ending the separatist conflict in the East, but eschewed abandoning these regions.

Instead of emphasizing the war or language issues, Zelensky put out a reform agenda. He proposed simplifying the bureaucracy and tax code, attracting investment, prosecuting corruption and reining in the country’s oligarchic class, while also pushing for eventual membership in NATO and the European Union.

What did the public think?

We spoke to several Ukrainian voters and civil society leaders in South and Central Ukraine about Zelensky on the eve of the second round of the election. To some extent, voters appeared swayed by the novelty of Zelensky’s platform. Mikhail, a voter from the central region of Poltava, said: “Zelensky has great and worthy people on his team. We are voting for something new.”

Alexey, a civil society manager in Poltava, speculated that voters may have been attracted to Zelensky’s distinct lack of either explicitly pro-Russian or nationalist identity. He noted that “shortly before the elections [Zelensky’s] rhetoric shifted toward being pro-Ukrainian and pro-European, even though a part of the electorate still considered him to be pro-Russian.”

Voters may also have supported Zelensky as a way to protest the political elite who had long dominated Ukrainian politics — especially the incumbent, Petro Poroshenko. Anna, a 22-year-old student from Kiev, said she “voted for the future and against Poroshenko.”

Dmitro, a 39-year-old supporter of Poroshenko, complained: “They’re not voting for Zelensky, but against Poroshenko. What is Zelensky’s platform? No one can tell, but everyone knows his face, so they vote for him.”

Is this a new era in Ukrainian politics?

The shift away from an East-West divide in Ukrainian politics is yet more evidence that demographics are not destiny. Research shows that both the actions of politicians and spontaneous events can shift national political alliances over time.

The continued relevance of a Center-South coalition will depend on Zelensky’s success in office. Few of Ukraine’s presidents maintain their popularity during their first terms in office, and only one has been reelected. Zelensky’s position may be especially tenuous because many voted for him as a way of opposing the political establishment. Time will tell if collective opposition to the establishment is sufficient to maintain the relevance of the Center and South over the East and West.