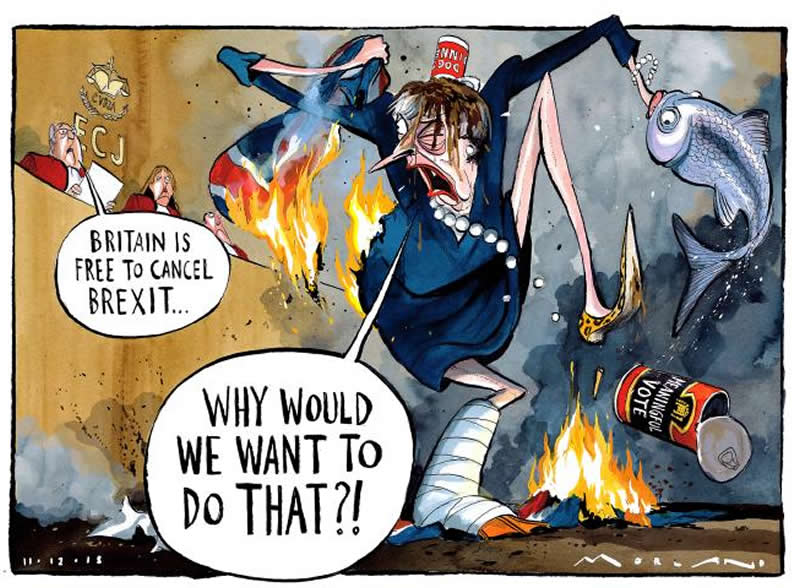 As if preparing for a major military operation, ministers have been counting down the days to the “meaningful vote” with the code used by army planners: D-3, D-2, D-1. This was supposed to be D-Day for Theresa May’s Brexit deal but yesterday, facing certain defeat in the House of Commons, she delayed the battle. It was a sign of extraordinary weakness, and a personal humiliation for the prime minister. It might help her buy some more time, but she has admitted that she cannot command the support of MPs on the most important policy implemented by any government for a generation. There is virtually no chance that the EU will agree to make substantial changes to the withdrawal agreement, so she will probably soon be annihilated in any case.

The Tory leader is like a child playing hide and seek who thinks that by covering her eyes she cannot be seen. She has managed to lose her authority in the Conservative Party as well as in parliament. “She’s toast,” says one Tory MP. More importantly, however, the political process is deadlocked. The constitutional crisis that has been predicted for so long at Westminster is finally upon us.

There is, it seems, an unbridgeable divide between the prime minister and her party, between parliament and the executive, between Brexiteers and Remainers, between pragmatists and ideologues. Underlying all these tensions is the conflict between our representative democracy, in which MPs are elected to legislate in the national interest, and the direct democracy of the Brexit referendum.

This is less a difference of opinion than a category clash — like playing chess on a football pitch, and expecting the pieces to observe the offside rule. The Brexit vote was a populist cry to “take back control”, painted in primary colours, but it must be delivered through a technocratic withdrawal agreement that was always going to be fifty shades of grey. Instead of a slogan on the side of a bus promising £350 million a week for the NHS, there are 585 pages of densely written text drawn up by the kind of “experts” who were denounced by the Brexiteers. More seriously, there is an innate incongruity between parliament and plebiscite.

Historically and constitutionally, MPs are the representatives, not the delegates, of their constituents. They are supposed to exercise their own judgment on behalf of the people who send them to Westminster. It is a concept best described by the Tory philosopher Edmund Burke, who told the voters of Bristol in 1774: “Your representative owes you, not his industry only, but his judgment; and he betrays, instead of serving, you if he sacrifices it to your opinion.” That principle was fatally undermined by the decision to throw the vexed question of Britain’s relationship with the EU to the voters in a referendum. Although legally, the result of the 2016 vote was only advisory, politicians felt morally bound by it. Many MPs are torn between their duty to do what they believe is right for the country and the political imperative to follow the “will of the people”. As one minister puts it: “The referendum has not added to democracy; it’s introduced a new conflict of legitimacy.”

If this is the real cause of the current political deadlock, then the logical way out is another popular vote. It is surely wrong to insist that public opinion is set in stone when the prime minister seems to change her mind on an hourly basis about what to do. Tobias Ellwood, the defence minister, tweeted last week that the mandate of the 2016 referendum “will begin to date” and “will eventually no longer represent a reflection of current intent”. Indeed Mrs May herself decided that the mandate of the 2015 general election no longer applied after 25 months and required another election. By contrast, it is now nearly 30 months since the EU referendum.

The Brexiteers denounce the so-called People’s Vote as a betrayal but can it really be a betrayal of the “will of the people” to ask the people to confirm their will? Nobody is suggesting that the 2016 result should be overturned, just that people should be asked whether they still want to leave now that it is clear what it means. Far from being an affront to democracy, it’s an assertion of democracy.

There was always an internal tension among Brexiteers about the meaning of “take back control” if Britain escaped the clutches of the EU. By appealing simultaneously to the ideological Eurosceptics, who were interested in sovereignty, and the white working-class voters, who cared more about immigration, the Leave campaign won the referendum but now the inherent contradictions are becoming clear. It was extraordinary to see the Brexiteers denouncing last week’s Commons vote that gave MPs a say over what happens if Mrs May’s deal is rejected. Stewart Jackson, the former aide to David Davis, condemned this assertion of parliamentary sovereignty as a “long planned coup by the establishment, well represented in parliament to cheat the voters out of the Brexit they voted for”.

With judges denounced as the “enemies of the people” and Tory pro-Europeans condemned as “mutineers” the hardline Brexiteers apparently only want to give control back to people who will do what they say. It is deeply irresponsible to warn of civil unrest if the people are asked for their opinion on such a critical issue. The danger is that this becomes a self-fulfilling prophecy, with passions inflamed by the cries of betrayal.

In Whitehall everyone is “going round and round getting dizzy with all the permutations” as one minister puts it but the idea of another referendum is gaining momentum at the highest level. David Lidington, the prime minister’s de facto deputy, has been talking to MPs who support a People’s Vote about how it could work. “He’s in listening mode,” says one, “but he is totally opposed to the Norway model as a way forward. When he was Europe minister he saw how trapped the Norwegians were in their relationship with the EU.”

Amber Rudd, the work and pensions secretary, also says she “can’t understand the hysteria” around the idea of another referendum, pointing out that, while she would campaign to Remain, people would have every right to vote to Leave. Several ministers are said to be ready to quit and support another popular vote if Mrs May’s deal is rejected by MPs — indeed, one has already written a resignation letter. Despite Jeremy Corbyn’s reservations, Labour is edging slowly but surely towards the idea.

There is a growing sense of inevitability about it. The political system is in meltdown, parliament is gridlocked and the prime minister has lost control of events. The government is doing nothing but Brexit and now it cannot even do that. Another referendum is the only way out of this mess.