Imagining 2030 is a series in which PS21 writers describe the world as they see it in 14 years time.

A doorway opens to my left and with the certainty that comes in the state of flow, I take it, catching a barely perceptible smile from the man who held it open and begins sliding it closed as I tear through. I feel the shift, like the sensation of breaking through a curtain of water as the flock coalesces around my initiative. I am now in the lead.

To follow is easy, the confidence to take the initiative when danger looms comes with experience. An unlucky first run will be your last.

I am rushing through a corridor, a service passage for the parallel arcade, functionally grey and dim. Is this just an act of spontaneous solidarity or is my unknown assistant a silent watcher? I do not even have time to consider if this is a trap. Another figure at the end of the corridor is slowly opening a door for me as I hammer closer and I burst into the light without time for thanks. I am between police lines now. 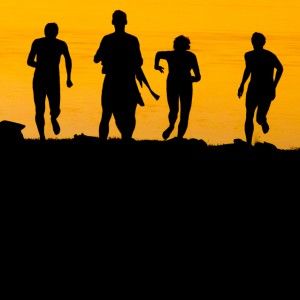 A fierce battle rages to my right. A former department store, now a private home, is obscured in clouds of tear gas. Truncheons loom in the fog, raised high more in symbolic threat than from genuine intent while dissent is silenced methodically in the obscure depths of the cloud by drone. I rush past, inexorably drawn towards what is redundantly still a restricted protest zone. All protest is illegal now which is why – legally – I am merely running. I catch other runners in my peripheral vision bursting from other doorways, from the main arcade, from a parallel street, from a shop. Our formation is loose, our unity algorithmic.

When the lead runner is taken out and dominance shifts automatically to another, it rips through you as a change in the texture of the patterns as subtle and distinct as the switch from mud to tarmac or from uphill to down. As an experienced runner, you shift speed and direction almost without thought, always keeping time to the pattern the haptics beat out. Survive long enough you come to recognise individual running signatures. I do not need to see her confident long-legged stride to know it is Jaime.

She passes behind a mobile billboard for Occupy the Musical (“Now in Its Tenth Triumphant Year!“) and the lead shifts. I never see her again. The fear of what that shift might signify can cut through even the deepest running trance but something in the growing desperation of today’s run keeps the fear pushed down. I adjust my rhythm to the new lead.

We’re strictly nonhierarchical of course. We have no fixed leaders, no explicit orders, no formal organisation.

I run. We do not call it protest because protest is illegal. Others prefer to fight. Others build defenses. Others engage is acts subtler still. When our activities overlap like today our combined acts more closely resemble the heroic precedent of the long proscribed antiwar, environmental, anti-austerity and pro-democracy mass protest movements of the last century and first decade of this but our movement of movements is even less tangible.

Individuals chose the algorithms that suit their temperaments. Greater algorithms determine when these come into play.

We are dark mesh. The public networks have been under total state control for close to a decade. The Internet Licensing Fee gives you access to all-you-can-eat, 247365 light entertainment, propaganda and drone-to-door impulse consumption. Our networks are ad hoc, encrypted and deniable.

The equipment that allows us to join in what in earlier iteration might have been called a smart mob is off-the-shelf, consumer fitness trackers with haptic feedback. Strapped to wrists or ankles or thighs and meshed, they allow us to feel the movement and direction of the other runners. Each of us makes constant, tiny course corrections based on our position relative to the runners on either side: out of these constant corrections, a pattern emerges with one runner setting the general direction and the pace until another takes the lead.

There is no centre of gravity on which the state can focus its force. There is no weak spot. The only way to stop us is to stop us all, one by one.

A police for every citizen! An impossible dream even for the totalitarians who let democracy die to fight terror and created the nightmare in which we run.

The lead shifts again. The pace increases. There are sirens and clouds of smoke and gas and screams and shouts and the sound of breaking glass. I run harder.

Those who design the algorithms are unknown. They do not engage in the playful posturing and acts of provocation early hacker groups liked to adopt. They release quietly and regularly without fanfare, without explanation, without notes or manifestos, just the source.

Some even say it is a biological intelligence that guides our moves.

There is despair in the mesh today. Desperation. The flock feels lighter. How many of us are left? I hear the almost gentle whoosh as a police van catches fire in a nearby alleyway and keep running. Is that gunfire? An explosion? This is no ordinary run.

The boards are always full of chatter. Are these algorithms designed or evolutionary? Is there a guiding intelligence to the patterns we carve, the disruption we cause? Are our tactics the results of a strategy or will our purpose merely emerge? There are those who argue that there is no goal, that the path is the way. Running is freedom.

Others, more cynical, suggest that the forces that make the decisions are too far beyond the reach of influence, that we are left with only this, an extreme urban sport like base jumping, a hobby for the angry, the bored, the over-educated, the misfits, the over-empathic, the —.

I do not see the trap. The faraday mesh enfolds me and I fall, physically and electronically blind, suddenly immobilised in a moment of shock that cushions me from the pain of the truncheon blows. I hear but do not feel my arm break. My body high from hours of running does not sense the pain as a boot cracks my ribs. Pulls back. Kicks again.

They say there are those who slow walk with the certainty of common cause, even less visible than us runners, the silent watchers. Stand in a crowd and watch the citizens milling aimlessly under the trigger happy eye of the military police stationed at every junction, at every transport point, by every infrastructure element. Who knows how many of them are with us. How many window shopping calmly under the unsleeping eternal vigilance of the surveillance drones are actually following untrackable cues that carry them into an invisible dance with other shoppers? How many benignly enduring identification by the facial trackers that scan us thousands of times a day and cross-reference us with data from the May database are secretly with us, biding their time patiently, loyally, waiting for the end game signal we all believe will come.

Do they calmly now watch me being beaten in a London street by the police in the middle of a bright afternoon?

As the blows continue, indiscriminate, savagely free, two things enter my mind with a clarity that I register as shocking without being shocked – the unthinkable truth that I may actually die right here right now and the realisation that the cascading disaster movie I glimpsed while running down Regent’s Street just ten minutes before, the full screen demo of the latest must-have audiovisual tech may not have been a film. The police usually keep their violence sheathed at least until night falls. They are acting as if they have nothing to lose. Were those special effects? The blows continue. My mouth is full of blood and teeth. Smoke gathers over Westminster.

Tim Hardy is a writer, facilitator and sometime activist with a special interest in the political and cultural consequences of new technology. He is a PS21 Global Fellow.

Interested in contributing a piece to the series? E-mail us at PS21Central@Gmail.com