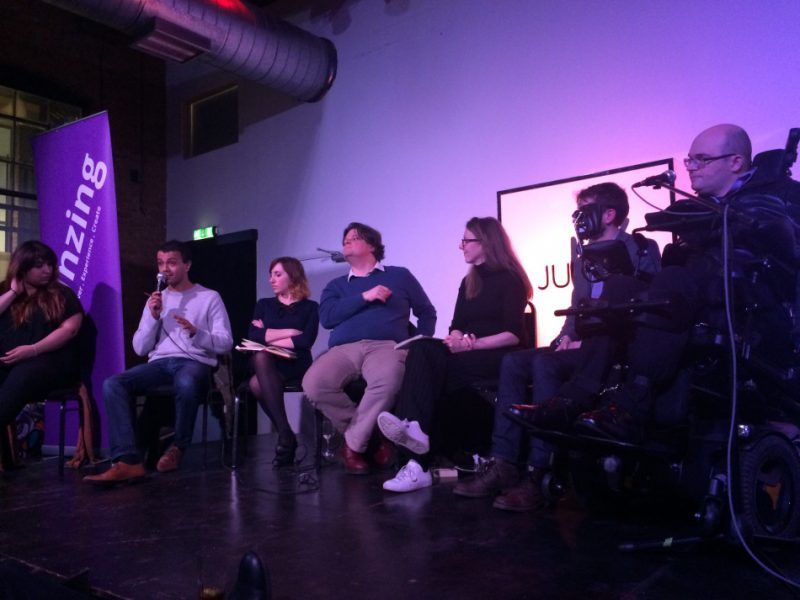 What will Britain look like by 2030? How will Brexit have played out or will the process be still ongoing? Will Great Britain’s map have changed or will greater devolution have resulted in a tweaking of borders? What kind of government might be in power?

A panel of experts gathered to discuss these questions and more at Juju’s Bar and Stage. The discussion, titled ‘Imagining Britain in 2030’ was moderated by Peter Apps, Reuters Global Affairs Columnist.

Paul Swinney, Head of Policy and Research at the Centre for Cities started off the discussion speaking on the reality of future changes to the world of work, such as the rise of the robots, will play out across the country. This threat of job losses is nothing new – technologies developed over the last century, such as electric street lamps and washing machines for example, have destroyed work for lamplighters and laundry workers. Despite this, new jobs and careers have emerged to replace these lost jobs. But there is a clear geography to these changes – cities further north are more vulnerable than southern cities to this latest wave of change, both in terms of being more exposed to job losses, and the likelihood is that new jobs created in northern cities will be lower skilled, reflecting recent history. And so Swinney’s predictions for 2030 were for the economic and political divides (signified by the Brexit vote) to get wider.

Kathryn Corrick, founder of Corrick, Wales & Partners, stressed the level of technological change over the century so far and the sense of dislocation it had sometimes created. She saw a clear need for policymakers to think about the future to prevent missteps, especially looking forward into data protection laws and augmented reality. She further saw an age in which experts might become trusted again and devolution strengthened, perhaps through new forms of digital democracy. Perceptions of ‘Britishness’ were in flux, she said, and policymakers needed to become better at listening to people across the country if it was to overcome its challenges.

Jonn Elledge, editor at the New Stateman’s Citimetric website said Britain was on the edge of becoming two nations with very different politics. One was multicultural, urbanised and attracting educated young people, while suffering social strains, particularly around the supply of housing. The other, based around both smaller towns and failing post-industrial cities, was losing jobs and people, and increasingly politically angry. The economic divide had become even more significant than Germany’s, where part of the country was under Communist rule up until 1989. Elledge’s proposal as a potential solution for this problem was a serious debate about the moving of the capital away from London – although he doubted it would ever happen. Furthermore, he saw stronger local government as a strategy to move forward.

Jade Azim, Young Labour blogger, shifted the conversation towards the emerging generation of young millennials. This group was struggling to find opportunities, but more importantly did not believe it would ever be able to afford their own major capital investments, particularly housing, risking becoming a permanent rentier class. Azim said that this would eventually break the correlation between property/wealth and conservatism, becoming the first median voter to rent rather than own properties and thus rewriting the political map. This demographic was also developing its very own tastes and wants, she said, prioritising experience over property. Azim saw a change in the meaning of working class – and that the way social stratifications are measured now needing to change if we want to understand class as a concept. In the future addressing of inequalities will be an essential step, Azim stated.

Rayhan Haque, Policy Adviser on future of work issues said by 2030 we will have abolished tuition fees in the UK, as the current system was unfair for students. He also predicted that by 2030 there will have been a Labour government which would have lowered the voting age to 16, making a no fees system permanent and substantially shifting the power of the electorate towards young people. More generally speaking, he argued education needs to ensure strong basic skills for students, and a more skills focused curriculum to allow young people to become emotionally intelligent and gain skills essential for the job market. Haque suggested lowering immigration heavily was a false economy that would do great damage to our economy and society and that by 2030 more people would be willing to support a more liberal system or freedom of movement.

Freelance writer Amna Saleem said Britain sometimes risked appearing like a country that ‘peaked in high school’ and whose hankering after the past made adapting to the future much harder. She said by 2030, inclusion and diversity should not be seen as extraordinary – and individuals should not find themselves so often defined by just one or two characteristics. The Brexit referendum, she said, risked narrowing nationalism in a potentially toxic way, with people turning against her as a Scottish-Pakistani woman. She further advocated for more empathy and the willingness to share power as needed measures for greater equality.

The discussion was fast-paced, lively and always entertaining. It presented many problems, but also offered up solutions. There was a lot to worry about, Peter Apps said in conclusion. But given the in many ways even more concerning political trends in the US and continental Europe, he suggested, the worst case scenarios for Britain in 2030 were at least marginally less bleak than for many other countries.