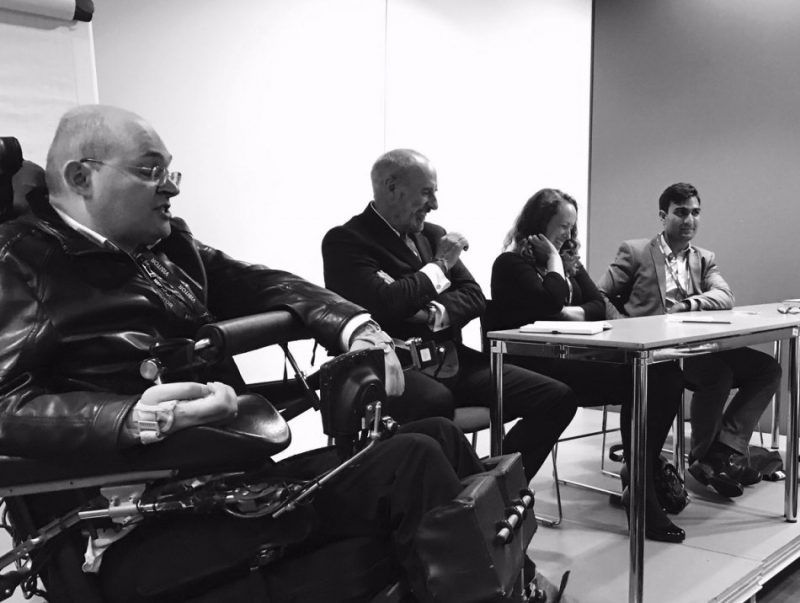 The future of warfare may be coming faster than we think.

That, at least, felt like the conclusion of Tuesday’s panel on “Imagining War in 2030”, organized by the Project for the Study of the 21st Century and the British Army Intrapreneurs’ Network [BrAIN]. With dozens of military and civilian attendees packed into a relatively airless conference room in Whitehall, a panel of leading experts sketched out what looks to be a period of massive technical, geopolitical and deeply unpredictable change.

Royal United Services Institute Futures and Technology fellow Elizabeth Quintana sketched out some of the technical breakthroughs coming down the line as nations invest in new cyber, electromagnetic and growing technologies as well as hypersonic and other weaponry. Russia, she told the audience, already had a semi-autonomous humanoid robot that could fire a gun and which they intend to send to space.

Former Director Special Forces and Commander Field Army Lieutenant General Sir Graeme Lamb outlined how the pace of change was now proceeding much faster than anyone had anticipated. The year 2030 might be only 13 years away, but breakthroughs in quantum computing, artificial intelligence and other fields were all producing breakthroughs at considerable speed. They would produce potentially massive societal and other changes, and government and military institutions were not currently keeping pace.

Kings College London lecturer and former Foreign and Commonwealth Office official Samir Puri outlined how he had seen some of these changes in action as an OSCE observer in Ukraine. Different nations would demonstrate their geopolitical ambitions in different ways in the years to come, he suggested, pointing out that while a host of states including Britain, Iran, Russia and others have their own imperial memories, they were of very different empires and shaped very different regional and global aspirations.

But not everything would change, he cautioned – it was entirely possible the US and its allies would still be embroiled in the Afghanistan war at the end of the next decade.

Unsurprisingly, there were a range of different views on how the military and other institutions should and could adapt to such an unpredictable future. Some questioned to what extent traditional military “pyramid” shaped hierarchies could possibly adapt [although Lieutenant General Lamb argued that while flatter hierarchies have their strengths, outright conflict required much greater resilience than they could offer].

While traditional Western militaries concentrated on traditional war fighting [phase 1 operations and upwards, in UK military terminology], many of the West’s adversaries were becoming much more adept at operating below that threshold, within “phase zero” operations. That trend was only likely to intensify in the years to come, he argued.

Most attendees felt that keeping pace with current changes in cyber and other domains was proving challenging enough, but relatively near-future breakthroughs in artificial intelligence and machine learning was felt set to provide even greater changes. While current drone warfare has actually proved very “human intensive” given the number of intelligence and other individuals involved in targeting and assessment, there will be inevitable moves towards artificial intelligence performing some if not many of those tasks. Where lines are drawn – particularly on the decisions to take human life – will be highly contested, and non-Western potential foes may be much more willing than ourselves to take such steps. [”The Russians tend to trust machines more than they trust people,” said Elizabeth Quintana, pointing to a trend she traced back to Soviet times].

Integration and flexibility would be key to handling these new trends. Lamb said he expected a special forces team of the near future would also be integrated with robotic/artificial intelligence capabilities – although what exactly that would look like was another matter.

Some attendees questioned whether the modern British Military was truly flexible enough to keep track of such new trends – although there was clearly plenty of enthusiasm for doing so.

Building the systems and processes for that would be key. As US military historian Thomas Ricks [himself paraphrasing US General Omar Bradley] once said, while might talks tactics, professionals talk logistics, real insiders focus on career structures to determine what really gets done.

This event was the first of several planned by PS21 to explore the world of 2030 [you can read a range of pieces exploring that world on the PS21 website here]. We will also be holding further events with BrAIN later this year and into 2018.

Wired.com interviews US analyst Peter Singer on the future of warfare

Peter Apps is Reuters global affairs columnist and executive Director of the Project for Study of the 21st Century. He is also a reservist in the British Army and member of the UK Labour Party.