Paul McCartney is stressing out.

At various points in “The Beatles: Get Back,” the three-part, nearly-eight-hour documentary chronicling the 1969 sessions that would lead to the band’s final public performance, Mr. McCartney is clearly more frustrated at the creative and interpersonal roadblocks to the group’s progress than any of his bandmates are.

But Mr. McCartney is also the Beatle most visibly invigorated by a daunting challenge.

“The best bit of us — always has been and always will be — is when we’re backs-against-the-wall and we’ve been rehearsing, rehearsing, rehearsing,” he declares as the band debates whether to make the epic climb up to the roof of Apple Records’ London headquarters to play a concert.

We know how the story ends: They put on a show so brilliant that some of the live cuts ended up on “Let It Be,” the final original album they released. And yes, the group passed the audition.

More than a half-century after the Beatles’ breakup in 1970, the director Peter Jackson has stitched pieces of dozens of hours of previously unseen footage into a profound, multidimensional creative statement of its own.

One part of the genius of “Get Back” is rooted in its depiction of the collaborative creative process, the emergence of a four-of-us road map for innovating on the fly. We see this not only via classic Beatles songs such as “Let It Be” and “The Long and Winding Road” coming to life before our eyes and ears, but also in what amounts to a master class in the fragile and fraught art of making magic under intense pressure.

There are many ways to watch Mr. Jackson’s opus — as an intimate glimpse at the dissolution of the greatest rock band of all time; as an epic psychodrama of friendships collapsing; as the settling of the perennial “breakup” debate among hard-core Beatles fans; or as The Guardian put it, as “eight hours of TV so aimless it threatens your sanity.”

I chose to watch it as a series of valuable creativity lessons, set to a Beatles soundtrack. Here they are. 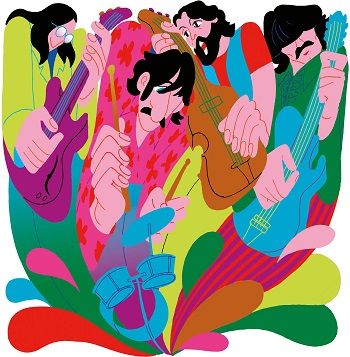 Early on in the film, Mr. McCartney struggles to get enthusiastic group buy-in on the quest to come up with 14 new songs within two weeks and record them live for a TV show. Tension among the members and the pressure to achieve this seemingly impossible goal temporarily drive George Harrison from the band.

But thinking big and expansively opens up new creative possibilities. Brainstorming possible venues for the concert, they consider a children’s hospital, a cruise ship, an amphitheater in Tripoli. None of these ideas stick, but the freewheeling, anything-goes thinking plants the seeds for the epic rooftop performance to come.

When the Going Gets Tough, Come Together

Even while bickering in the cavernous Twickenham movie studio before Mr. Harrison’s departure, the Beatles huddle in the corner as if they’re back on the tiny stage of the Cavern Club in Liverpool, where they played together before hitting it big.

The longtime friends and bandmates are barely talking, but they’re playing and singing and riffing off one another’s ideas. Among the multiple cases in point: “I’ve Got a Feeling,” perhaps the last true Lennon-McCartney composition. As John Lennon later puts it, “All we’ve got is us.”

When Mr. McCartney comes in hard with the ambitious show goal and tries to step up as the band’s de facto leader, Mr. Harrison and Mr. Lennon bristle — not only over the shifting power dynamic but also because it disrupts that duo’s evolving free-form way of working.

“You’ve got to carry on until you get there,” Mr. Harrison tells Mr. McCartney as they struggle through early tries of “Two of Us.” Mr. Lennon becomes a blunt cheerleader: “I’d say improvise it, man.”

Mr. McCartney, tired of being the uptight taskmaster, briefly relaxes and sees the song start to take shape through a jam.

A Change of Scenery — and Goal — Can Help

After Mr. Harrison’s return to the band, the four gather in the cramped basement of Apple Records, having agreed to at least temporarily shelve the TV special idea. There, they jam, joke and loosen up as the numbers they’ve been working on get tighter.

“You’re working so well together,” the record producer George Martin remarks to Mr. Harrison. “You’re looking at each other, you’re seeing each other. It’s happening, isn’t it?”

New Blood Can Freshen Things Up

The arrival of the master keyboardist Billy Preston improves the vibe, the playing and the behavior of the Beatles as a unit. The creative spirit revived by Mr. Preston radiates beyond the band — to Yoko Ono’s impromptu vocalizing and Linda Eastman’s capturing the sessions in photos, each offering their own brand of inspiration. Ringo Starr goes from behind the drums to the piano to write “Octopus’s Garden.”

The guest appearance is so successful that Mr. Lennon suggests that Mr. Preston be made a Beatle, and Mr. Harrison calls for adding Bob Dylan. Mr. McCartney chooses humor over exasperation in his response: “It’s bad enough with four.”

Despite their varying levels of engagement during the sessions, the Beatles generally arrive to the studios ready to work, and the sessions are remarkably fertile — especially for Mr. McCartney, who turns out “Get Back” and “Oh! Darling,” among other songs. Mr. Harrison brings in “All Things Must Pass” and muses that he’s written enough songs for a solo album.

Even as wine, beer and more flows, the Beatles stay disciplined, working and reworking lyrics and arrangements until they get them right. “To wander aimlessly is very un-swinging,” Mr. McCartney says. “Unhip.”

Creativity Can Be Repetitive and Boring, Until It’s Transcendent

Watching the umpteenth run-through of “Don’t Let Me Down” may not be everyone’s cup of English tea. But it’s the repetition and exhaustive honing of lyrics and musical arrangements that delivered the songs embedded in the musical DNA of generations of fans.

And it’s the repetition that gives the band the confidence it needs to bring the show to the rooftop. Up there, they gave it their all for 42 minutes, until the police ended a performance for the ages.

Nothing Lasts Forever — Except the Art, if You’re Lucky

One thing is clear from “Get Back”: The Beatles didn’t want all that they’d built to end. But they knew things would have to change to move forward. The documentary allows us to watch the struggle of four men, all still in their 20s, trying to grow up, yet not grow apart, creatively and otherwise.

In a moment when it’s unclear whether Mr. Harrison will return, Mr. McCartney comforts himself with a daydream about the four friends coming together again, many years from now. “Probably when we’re all very old, we’ll all agree with each other and we’ll all sing together,” he tells Mr. Lennon.

That, sadly, didn’t come to pass. But thanks to Mr. Jackson’s masterpiece, we can watch the band play together again, offering an inspirational peek into what made the Beatles the greatest pop-culture creative force of them all.

Jere Hester, the editor in chief of The City, is the author of Raising a Beatle Baby: How John, Paul, George and Ringo Helped Us Come Together as a Family.