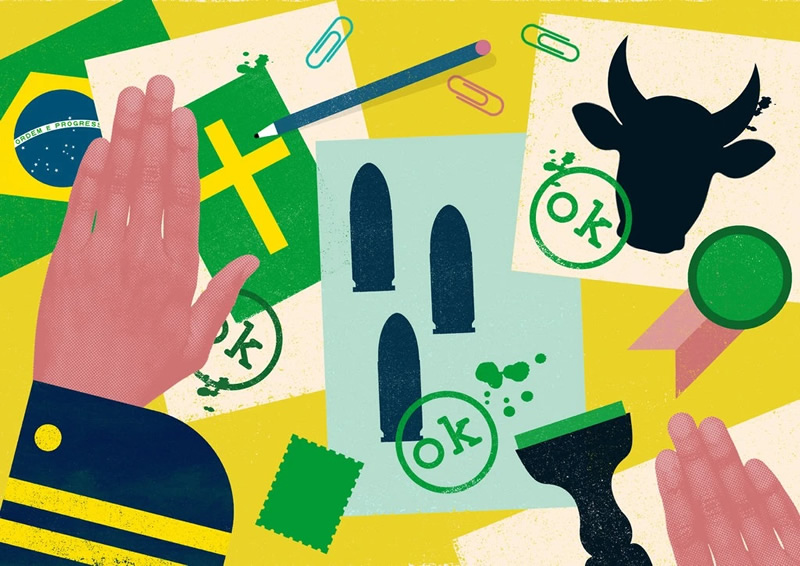 “They lost in 1964, and now they have lost in 2016,” Jair Bolsonaro, a conservative congressman, said during the April 17 session when the lower house voted to move ahead with the impeachment of President Dilma Rousseff. With these words he sided with the “winners” of a military coup that overthrew a democratically elected government in 1964 and set the stage for 21 years of brutal military dictatorship.

Mr. Bolsonaro, a former army parachutist and a possible presidential candidate, dedicated his vote that day to the memory of Col. Carlos Alberto Brilhante Ustra, who headed the DOI-CODI, the intelligence agency responsible for suppressing critics during military rule. The congressman lauded Ustra as “the dread of Dilma Rousseff.”

He’s right about that. For three years in the early 1970s, the president, a former Marxist guerrilla fighter, was subjected to electric shocks on different parts of her body and suspended upside down from a rod by her wrists and ankles. She suffered internal bleeding and one of her teeth was knocked out by a punch from an interrogator.

Ms. Rousseff was only one of the estimated thousands of people tortured by the Brazilian military regime. The dictatorship was responsible for countless human rights violations, including arbitrary arrests, sexual violence and hiding dead bodies. According to a report from the National Truth Commission, at least 434 people were killed or disappeared during this period: journalists, students, teachers, doctors, farmers, trade unionists, lawyers, former politicians from the opposition, even a housewife, a diplomat and three Catholic priests.

Despite these well-documented atrocities, more than 30 years after the end of military rule some people in Brazil seem comfortable speaking in support of the military regime. During an anti-government protest last year, old ladies held signs that read: “Why didn’t they kill them all in 1964?” and “Dilma, it’s a pity they didn’t hang you at the DOI-CODI.” At family dinners and in taxicabs, you can hear talk of how things were better when the generals were in charge.

Brazil’s political class is caught in a huge corruption scandal. The government, led by the left-wing Workers Party, is unpopular, and Ms. Rousseff’s removal from office looks imminent. Under these conditions, it seems it has gotten easier to be an advocate of the far right, praising convicted torturers as if they saved the country from much worse terror.

Mr. Bolsonaro, who represents the state of Rio de Janeiro, is the most public face of this movement. He has been advocating for a return to military rule for more than 20 years but these days his message is finding new resonance. He was re-elected by his widest margin yet in 2014, and he’s the favored possible presidential candidate among rich Brazilians for the 2018 election, capturing 15 to 23 percent of their votes in recent polls. But he is hardly alone.

Alongside other conservative politicians, he belongs to the powerful “BBB caucus” — short for “bullet, beef and Bible,” since they represent the interests of security forces, agribusiness and evangelical churches. Not all of the caucus’s members are wistful for the days of the military regime — at least not openly — but they seem to prefer right-wing dictatorship to democratic government run by the left. One congressman wears a military uniform to work and refers to the 1964 coup as a “democratic revolution.”

Authoritarian nostalgia now seems to be a trend. Mr. Bolsonaro says that what Brazilian people miss most are the moral values of the military: “There was decency and respect for the family. Things today are disgraceful,” he said in an interview with a news website, specifically mentioning the legalization of marijuana as one of the many moral failings of today’s Brazil.

According to a 2014 poll, 51 percent of Brazilians think that the streets were safer during the military regime. “It was a wonderful time when you could walk in the streets with safety, and your family was respected,” Mr. Bolsonaro said in a TV interview. (I would add that it was true only as long as you or your family weren’t labeled by the government “subversives,” “terrorists” or “enemies of the state,” which could be anyone who dared to speak against the regime or even a mother asking questions about her murdered daughter.)

There is also a widespread perception that corruption, which is undoing the current government, didn’t exist in those days. That’s not true, of course. It’s now reported that under the military regime there were cases of the police working with drug traffickers, and governors taking bribes, among other examples of graft. What didn’t exist in those days was freedom of speech and a free press to denounce government misdeeds.

For Mr. Bolsonaro, surrendering Brazilians’ freedoms is a small price to pay “to have the teachers respected in the classroom” and “to be able to buy a revolver” in a department store.

But perhaps when Mr. Bolsonaro and his supporters pine for the days of family values, gun rights and respect for teachers, what they really miss is something else: a time when the conservative elites faced few challenges, when underprivileged people — minorities and the poor — couldn’t expect more than to have to follow orders.

In the past few decades, and especially since the Workers Party came to power 13 years ago, that reality has changed, even if incompletely. Now democracy means that every citizen is of equal status and everybody deserves a voice. Perhaps all this nostalgia for a military dictatorship is really about keeping people in their place.

Vanessa Barbara is a columnist for the Brazilian newspaper O Estado de São Paulo, the editor of the literary website A Hortaliça and a contributing opinion writer.