The names of India’s major cities have been falling off the map. In 1995, Bombay (an Anglicization of the Portuguese name “Bombaim”) became Mumbai. In 1996, Madras became Chennai. Over the next two decades, virtually every major city in India — from Cochin (now Kochi) to Bangalore (now Bengaluru) to Calcutta (now Kolkata) — was renamed. Some of the changes, as in the case of Trivandrum (Thiruvananthapuram as of 1991) were meaningful and represented a return to an older name that British rule had mangled. Others, as in the case of Calcutta, were as bizarre as the French decreeing that everyone must now refer to Paris as “Paree.”

Names in India are rarely just names. Jawaharlal Nehru, the country’s first prime minister, described India as a country where “one under the other, are written many facts, ideas, and dreams, without any of them completely covering that which is below.” The different layers of history — British, Muslim, Hindu — do not sit easily one on top of the other. In each period, there are those who see themselves by turns as inheritors of history and its victims.

With so many competing ideas of history, names reflect that very basic need of having the world see you as you see yourself. With greater exposure to the gaze of others, the need grows more urgent. As the instinctive self-confidence of a closed society gives way to a new oversensitivity, names become infused with the special anxiety of wanting to control India’s image. 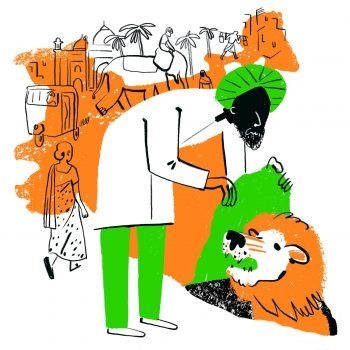 The mania for changing names began in newly independent India with the effacement of old British names. In Delhi, where I grew up, the process that was underway years before I was born continued through my childhood in the 1990s. One by one, old British names fell: Harding Avenue became Tilak Marg; Willingdon Crescent, Mother Teresa Road. The city’s authorities even changed the name of the street where I lived: South End Lane, which had marked the southern extremity of British Delhi, became Rajesh Pilot Lane. In a classic gesture of postcolonial confusion, they erected a sandstone monument bigger than the original street sign to explain the importance of the old name — but not why it had been renamed after a largely forgotten government minister.

But if the British layer was but a topsoil, India’s Muslim past was another matter. India, like the Balkans, had several centuries of Islamic rule over a largely unconverted population. The Islamic conquest of the Indian mainland began in the 11th century and continued until the 18th. All across a state like Uttar Pradesh, the most populous in the country, there are cities, as Rebecca West would say, “of two natures.” The medieval Muslim town of Kannauj overlays the Hindu city of Kanyakubja, the fabled capital of the eighth-century king Yasovarman. Allahabad sits atop the Hindu city of Prayaaga, situated at the confluence of three sacred rivers. In some cases — such as in Varanasi, the spiritual capital of Hinduism — great mosques rise over the bones of old temples.

But the Muslim past, unlike the British, does have inheritors — the more than 170 million Indian Muslims. It is not so easy to erase their history, and historically India has not sought to do so. The Indian approach was always syncretic. Cities with multiple natures went by multiple names. Varanasi, for instance, was known and still is by its Muslim-era name Banaras to both Hindu and Muslim alike. But both communities, when they meant to evoke the name of the sacred city that underlay the physical one — the city of Hindu myth and pilgrimage — would automatically refer to it by its ancient Sanskrit name, Kashi.

That Indian sophistication is increasingly a thing of the past. Hindu nationalism is ascendant, and the political fortunes of a party like the ruling Bharatiya Janata Party, have been built on a weaponized idea of history. Narendra Modi, now the prime minister, helped organize the 1990 political and religious movement that led eventually to the destruction of a 16th-century mosque in Ayodhya, said to stand on the birthplace of the epic Hindu hero Ram. That event, which led to Hindu-Muslim riots in which 2,000 died, is seen by many Indian Muslims as the moment when India’s syncretic culture began to unravel.

Since Mr. Modi came to power three years ago, his government has played the name game cautiously. In 2015, Aurangzeb Road, an arterial street in British Delhi named for a reviled 17th-century Mughal emperor, was renamed Abdul Kalam Road, after a Muslim president of India in the early 2000s and a major figure in the country’s missile and nuclear programs. This was the B.J.P. replacing the name of a Muslim villain with a Muslim patriot.

But more and more the party’s view of India’s Muslim history is monolithic. In Goa last year, the B.J.P. president, Amit Shah, described the Muslim period as part of a thousand-year history of slavery. Some months before, a B.J.P. minister had demanded that even Akbar Road — named after the third of the Great Mughals, and the exemplar of religious syncretism — be renamed for the Hindu king he defeated in battle.

It was an example of how even the glories of the Muslim past in India could in the eyes of its Hindu majority come to seem like an unbroken record of defeat. More recently, Yogi Adityanath, the new chief minister of Uttar Pradesh, said, “Foreign dignitaries visiting the country used to be gifted replicas of the Taj Mahal and other minarets which do not reflect Indian culture.” If the Taj Mahal gets under your skin, safe to say probably everything will.

The war of nomenclature’s tensest battle lines are drawn around the relationship to modernity. India, like so many postcolonial countries, is an ancient culture reborn as a modern nation. The two most basic terms for the country reflect that double nature, modern and traditional: “India” and “Bharata.” The latter is the Sanskrit word, more commonly rendered in Hindi as Bharat, and it is the name by which the country knows itself, free of the gaze of outsiders. The former is Latin, and the etymology alone represents a long history of feeling oneself as under Western eyes. “Indos” is the Greek word for the Indus River; it is in turn derived from the Persian “Hindu,” which is an antique corruption of the Sanskrit word for river, “sindhu.”

“India” and “Bharat.” The one suggests modernity, with all the appeal and affront of the West, while the other represents that deeper need all people have to stay true to themselves, and their culture. The two are not easily reconciled. From the belly of the smartphone come alien values, attitudes, a way of life, and it is not really possible, as one Brahmin in Varanasi suggested to me, to be Western outside, and Indian at home.

The failure to assimilate the modern West — not just its trappings, but also its values — is never more apparent than in the epidemic of rape sweeping India. Rape, it is said, is not about sex but power. Modernity is power, and those who have better assimilated it, especially if physically weaker, can often appear threatening to those who feel disempowered. The most famous case of this kind was of Jyoti Singh, a 23-year-old who was gang-raped in Delhi in 2012. The attack was so violent that she died of her injuries.

But even here the war of names continues. When the head of India’s main Hindu nationalist organization, the Rashtriya Swayamsevak Sangh, the cultural fountainhead of the B.J.P., was asked about Ms. Singh, his reply revealed the hysteria that underlies names in India today: Such crimes, he said, take place in India, not in Bharat. He added: “Where ‘Bharat’ becomes ‘India’ with the influence of Western culture, these types of incidents happen.”

Aatish Taseer is a contributing opinion writer and the author, most recently, of the novel The Way Things Were.