In the spring of 2011, hundreds of thousands of Syrians rose up in protest to demand democracy and freedom and an end to the dictatorship of President Bashar al-Assad. The response of the regime was to escalate the methods of repression that had been tried and tested against political opponents since the 1970s: arbitrary detention, disappearance and torture.

I worked as an Arabic teacher in the Damascus suburb of Germana, where my husband and I lived. We were both activists in a left-wing opposition party that had been suppressed for decades. I also founded an organization called Syrian Women for a State of Citizenship, which has been active since the start of the revolution. We worked to create economic opportunities for women and to promote peace and reduce conflict between armed factions at a local level.

I was first arrested on July 20, 2011, for participating in a peaceful demonstration in downtown Damascus. Along with six other activists, I was beaten with fists and an electric rod by members of the shabiha, the Baathist militia loyal to the Assad family. The regime gave these thugs a blank check to terrorize anyone suspected of opposition sympathies. They abused and manhandled us, before handing us over to the police. 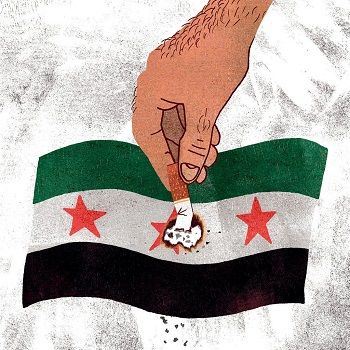 We were held by the criminal security branch — in effect, the secret police — for 12 days, and then appeared in court before a judge, who granted us bail. We later received summonses, but we never showed up; eventually, the case against us for an “unlawful demonstration” was dropped.

As the security situation deteriorated through 2012, the regime’s tactics became harsher. By some estimates, more than 200,000 people have been detained as political prisoners, including thousands of women, and even young children.

On Dec. 30, 2013, I was arrested again, when I went to a passport office to apply for a visa to attend a women’s conference sponsored by the United Nations. An arrest warrant was also issued for my husband, but he succeeded in going into hiding for the duration of my second detention. This time, I was fired from my job.

The worst thing about detention was not knowing whether it would ever end. I could have been killed at any time — prisoners die by the score every day from the effects of torture. I feel lucky just to be alive.

We were isolated from the outside world and had no access to lawyers. For more than a month, I shared a prison cell with more than 30 women who were all detained for different charges, either because of their relief activities in the besieged areas, their personal or family ties with members of the armed opposition, or as a result of a false security report. The cell was about 50 square feet, dark and cold, with no ventilation.

Torture was routine. Anyone who has been detained in Mr. Assad’s prisons will know these details. There are about 40 documented techniques, including suspending prisoners by their arms from the ceiling, electric shocks, beatings, cigarette burns and pulling nails. The screams of the tortured were unbearable; I nearly lost my mind in there.

More than 60 men were held in a neighboring cell. Regardless of the charge, the guards called us all terrorists and beat everyone. The number of detainees went down as some died, and up again as more were brought in. Some were forced to sleep next to corpses before the dead were disposed of. Among the living, our exhausted bodies became infested with lice; we got rashes and skin infections.

I was fortunate not to be harmed physically, unlike a doctor held with me who was falsely accused of kidnapping a Syrian Army soldier. They hung her from her hair instead of her wrists, and kept dousing her body with cold water and shocking her with electricity until she lost consciousness for days at a time.

We were interrogated for long hours, and the interrogators kept us in a state of stress all day and all night. I was blindfolded, handcuffed and dragged to the interrogation room. The interrogator would slap me in the face again and again, ordering me to sign blank sheets to which he would later add false confessions.

During this second detention of about 40 days I was transferred from one facility to another, until I was lucky enough to be released in one of the first “reconciliations,” a cease-fire agreement between the army and rebels. These often resulted after the regime had besieged an area and subjected its population to starvation; the armed resistance had to lay down its weapons and cede control of the area under the terms of the deal, which included prisoner exchanges.

Once I was out, my husband — who had stayed only because of our two children — fled across the border to Lebanon. I was confined to Damascus and banned from traveling. Because Syrian law does not recognize women’s rights, I also lost guardianship of our sons. Finally, a judge granted me temporary custody and a temporary travel permit. So we left for Beirut and have applied for asylum, but we are stuck — without work, and with our children out of school.

We who have seen the inside of Mr. Assad’s jails call on the international community to stand against the catastrophic brutality in Syria, and put pressure on all sides to resume political negotiations based on the 2014 Geneva peace talks. The first step toward a solution must be an end to the killings, detentions and disappearances. International observers must be permitted to visit the prisons to monitor the condition of detainees.

Despite the dire security situation, I intend to go back to Syria if I get the opportunity. Eventually, there will have to be an end to this terrible armed conflict, and I believe that to guarantee their rights, Syrian women, too, must have a role in negotiating any final agreement.

Alise Mofrej is an Arabic teacher and Syrian activist.