On Sept. 27, thousands of Iranians attended the funeral of Mohsen Hojaji, an Iranian soldier who was captured and beheaded by the Islamic State. He was hardly the first Iranian casualty in Syria. As the head of Iran’s Martyrs Foundation announced a few months ago, the death toll among Iranian forces in the Syrian civil war has passed 2,100. Yet despite high fatalities in 2015 and 2016, polls suggest that Iranian public support for the military involvement has remained strong. What explains this continued support?

My research suggests that religious motivations, strategic calculations and efficient use of troop deployment have convinced a majority of Iranians of the need for their nation’s involvement in the Syrian civil conflict.

Who are the Iranians fighting in Syria?

Since the beginning of the civil war in Syria in 2012, Iran has had a growing presence in the country. Data I have collected from Persian online sources show at least 349 Iranian nationals — usually referred to as martyrs in these contexts — killed in Syria and, to a limited extent, Iraq in the past five years. This data set covers a longer period (January 2012 to July 2017) than other estimates and reports,  and it shows a larger number of fatalities with more detailed information on social and occupational characteristics of those killed. The information collected from obituaries, the martyrs’ biographies and interviews with their families provide useful insight into the scope of Iran’s involvement in Syria.

The Islamic Revolutionary Guard Corps (IRGC), which was established following the 1979 revolution to protect the Islamic republic from internal and external threats, is the main coordinator of forces sent to Syria. This group accounts for 81 percent of Iranian fatalities in Syria, as Figure 1 shows. The remaining fatalities come from the army and volunteers. Most of the volunteers are from the Basij Resistance Force, a paramilitary organization operating under IRGC. These volunteers have a wide range of occupations, including lathe operator, coffeehouse owner, worker, martial arts trainer, teacher, cleric, student and public employee. 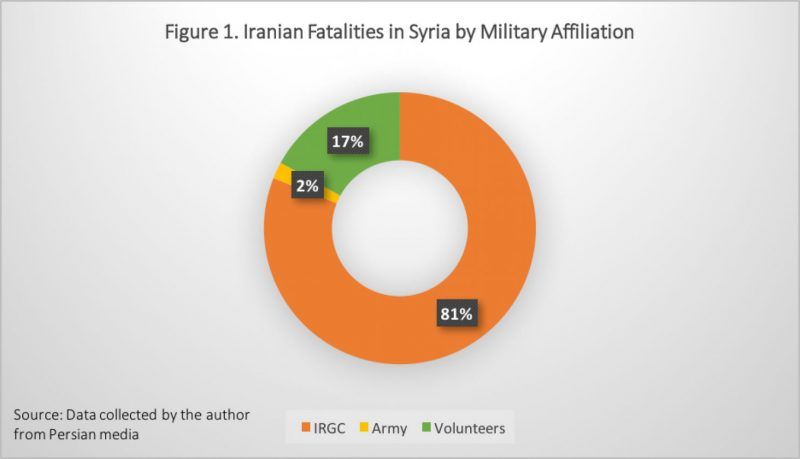 For more background about these casualties, I also mapped the geographical distribution of Iranian deaths in Syria.

Figure 2 presents the evolution of Iran’s involvement in the conflict from 2012 to 2017. While the casualty rate remained low from 2012 to 2014, it skyrocketed in 2015 and 2016 when the Syrian government launched a series of offensives to recapture Aleppo. IRGC fatalities include 39 generals. 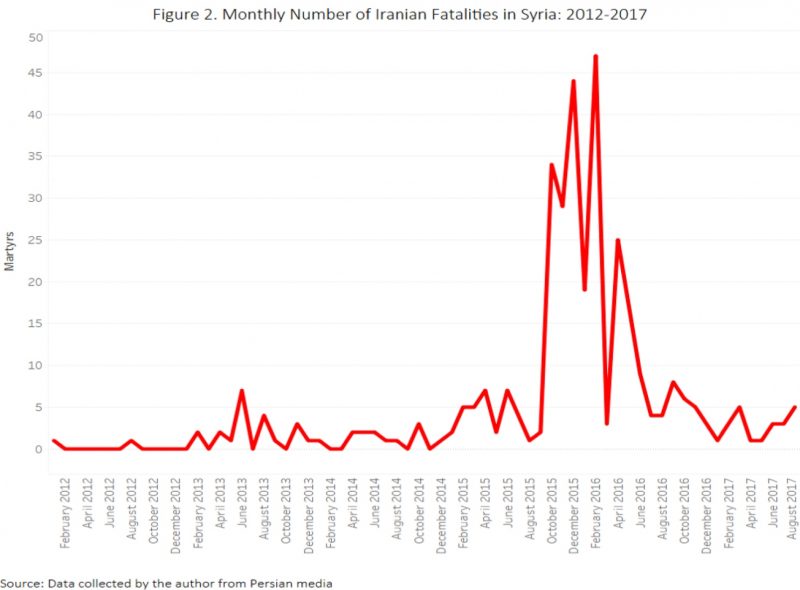 In addition to military involvement, Iran has aided the Syrian government with  lines of credit even while it has suffered financial sanctions and economic stagnation.

What affects public opinion on war?

A well-established literature on public opinion and war suggests that the public generally is casualty-averse. Surveys on public attitudes toward the Iraq War indicate that American public support for the war declined as U.S. casualties mounted. However, more recent studies suggest that the public might tolerate casualties if there are plausible justifications and expectations of success in military operations.

Surveys of Iranian public opinion toward Iran’s involvement in the Syrian civil war support the latter argument. Three recent polls show that despite the spike in casualties in 2015 and 2016, support for the involvement in Syria remained consistently high among the Iranian public.

Several factors explain this unwavering public support. First, the government has successfully managed to justify the Iranian strategy in Syria with an ideological language. The Iranian-backed Shiite fighters in Syria are called “Defenders of the Shrine,” referring to the Sayyidah Zeinab Mosque near Damascus, the burial place of Zeinab, granddaughter of the prophet Muhammad and a revered figure within the Shiite community. The desecration of the Zeinab mosque and other revered Shiite tombs by Syrian rebels has become a rallying cry for Shiites not only from Iran but also from Afghanistan, Pakistan, Iraq and Lebanon. A review of martyrs’ testaments reveals that defense of the shrine has motivated these fighters to go to Syria, with many explicitly mentioning the protection of holy sites and preventing rebels from dishonoring the shrine. A recent poll indicates that 89 percent of the Iranian public supports defending Shiite religious sites as an objective of Iran’s policy in Syria.

The government has also rationalized Iran’s involvement in Syria with security concerns, saying that if Iran did not fight the Islamic State in Syria, it would have to fight the group on Tehran’s streets. This resonated with an Iranian public scared about the Islamic State’s territorial advances in neighboring Iraq. Supreme Leader Ayatollah Ali Khamenei furthered this narrative, saying, “If they [IS] were not stopped, we would have to fight them in Kermanshah and Hamadan [provinces in western Iran].” According to recent polls, 87 percent of Iranians support Iran in its fight against the Islamic State in Syria.

Lastly, Iran has tried to limit its forces. Despite the common perception of Iranian nationals’ widespread presence, only a small number of IRGC personnel have been fighting in Syria. Many of those 2,100 are Afghan (both from Afghanistan and those who live as refugees in Iran) and Pakistani Shiites who fight under IRGC command. Some have estimated that only half of the fatalities in Syria under Iranian command were actually Iranians. An analysis of Shiite casualties shows that from 2012 to 2016, some 255 Afghans and 55 Pakistanis were killed in Syria. Adding Iraqi and Lebanese Shiites — mostly Hezbollah fighters — to the number of pro-government combatants demonstrates the diversity of Iranian-backed Shiite forces. Given its 534,000 active military personnel, Iran has deployed a very small part of its forces, possibly including elite members, to Syria. This efficient use of military force can mitigate possible public concern about war casualties.

These ideological and strategic motivations also explain why many volunteers continue to seek the chance to fly to the Levant. Although the IRGC has tried to avoid sending untrained volunteers, some have bypassed formal security measures by counterfeiting identification documents and joining the Afghan division. Others have received authorities’ approval by convincing them of their readiness through persistent petition.

Peyman Asadzade is a PhD student in security studies at the University of Central Florida.