“For decades, the United States has worshiped at the altar of a unified yet unnatural Iraqi state.” I wrote these words in November 2003, six months after President George W. Bush declared “Mission accomplished.” I described the outcome of what I saw as the splintering of Iraq into Sunni, Shiite and Kurdish regions as “The Three-State Solution.” This thinking — once again inflaming policy debates — seemed to me the only way to avoid the internecine tribal and religious war again underway.

Middle East experts dismissed the idea as a partition policy. My intent was not to advocate a policy, but to describe what I thought was the inevitable breakup of Iraq. I urged the United States to make this as peaceable as possible. It was my hope that these states would eventually form a loose confederation. 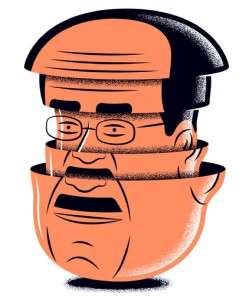 It appeared that the experts had strangled my idea in the cradle until a strange thing happened to me on the New York to Washington shuttle in 2006. Senator Joseph R. Biden Jr. took a seat next to me, and while the plane idled on the runway, we talked about Iraq.

Mr. Biden and I agreed on the following principle: We didn’t want a breakup or partitioning of Iraq. Such a rupture would ignite terrible slaughter inside the country and unsettle the Middle East as a whole. Alas, my 2003 article lent itself to the partition criticism, even though it saw autonomous regions as a possible solution, and Mr. Biden and I wanted to clarify that point.

At the same time, however, we still had to stress our belief that the fragmenting of Iraq was inevitable unless each religious and tribal group had strong incentives to stay in a unified state. For us, there was only one policy glue: federalism, or the decentralization of power to the regions with a limited role for central government. Though different in the particulars, the same idea provided the freedom of action for the original 13 colonies to form the United States of America.

In 2006, Mr. Biden and I wrote, also in an Op-Ed for The New York Times, that any stability in a united Iraq would be contingent upon an American troop presence that should not and could not be indefinitely sustained. Sunni dictatorships had held the country together in the past, but provided no long-term answers to the country’s challenges. We proposed instead that Kurdish, Sunni and Shiite regions “each be responsible for their own domestic laws, administration and internal security.” Baghdad would be declared a federal zone, and the central government there would be tasked with controlling defense, foreign affairs and the equitable distribution of oil revenues.

Despite all the criticism at the time, the Iraqis themselves embedded this approach in their Constitution. Prime Minister Nuri Kamal al-Maliki never implemented it, but rather sought to give his fellow Shiites the absolute power historically wielded by the Sunnis.

The question now is whether federalism is still feasible, or even desirable. Back in 2003, and still in 2006, Washington had the sway in arms and aid to have federalism implemented. Current American influence is limited, and President Obama’s clout will depend less on what American force he brings to bear in the current crisis than on what strategy he offers.

Sadly, he doesn’t seem to have one.

Let me offer a strategy that prioritizes fighting the jihadis now and pushes for federalism later. The most urgent task is to prevent further conquest by the Islamic State in Iraq and Syria, or ISIS.

Iraqi armed forces, despite their military superiority, can’t do this job alone. They just don’t have the stomach for such a fight. They must have outside aid, and they are already getting some from Iran, and now Russia.

This is helpful, but not enough. More Iranian aid should be the subject of urgent talks among Tehran, Baghdad and Washington. The risk is that Iran could get grabby, but I believe it will be restrained by its central objective of easing the United States-led sanctions.

The second step of this strategy is to set President Bashar al-Assad of Syria against the jihadis in Iraq, an offensive he started on his own with airstrikes last week. This would acknowledge the reality of Iraq and Syria as one strategic, anti-jihadi battlefield.

But instead of capitalizing on Mr. Assad’s anti-jihadi instincts, the Obama team now proposes to do what it has resisted doing for almost three years — to send hundreds of millions of dollars in arms aid for the Sunni rebels battling the Assad government. This move has American priorities backward. It will turn Mr. Assad away from the jihadis in Iraq, and back to fighting American-backed rebels in Syria.

The greatest threat to American interests in the region is ISIS, not Mr. Assad. To fight this enemy, Mr. Obama needs to call on others similarly threatened: Iran, Russia, Iraqi Shiites and Kurds, Jordan, Turkey — and above all, the political leader with the best-armed forces in the region, Mr. Assad. Part of the deal would need to be that the Syrian regime and the rebels largely leave each other alone.

If the jihadis can be halted, then smashed — and it’s critical to try to achieve that — the Iraqis must turn back to politics and the principle of power-sharing that they spurned not so long ago. For some time, Iraq and Syria will be torn apart by religious and tribal strife. These present circumstances provide barren ground for a settlement, but if the Iraqi Humpty Dumpty is to be made whole again, it can be only through a federal power-sharing formula.

The Obama team knows that Iraqis will not trust Mr. Maliki to share power seriously. They are maneuvering to find alternatives. It will be more difficult than ever to persuade Iraqi Sunnis to accept a federal Iraq, given recent history; even the Kurds seem inclined to go their own way.

Words will not bring Iraqis over from the separatist dark side. Only the hell of civil war can bring them back, in time, to political solutions. And only then can Washington help the Iraqis do what they should have done a decade ago.

Leslie H. Gelb, a former correspondent and columnist for The New York Times, is the president emeritus of the Council on Foreign Relations.