We're taking to the skies in ever-increasing numbers, and increased demand for commercial flights -- which is pushing down prices -- is creating a stranglehold that may ultimately lead to unsafe skies for all of us.

As a former pilot and current industry consultant, I have learned that nothing is ever the same on any day in aviation. Change is inevitable and learning never ceases. My colleagues and I thrive on this change and work with airlines and governments to manage it.

The number of high-profile air accidents involving Asian carriers last year, and the attendant coverage that these tragedies generated, has placed a lot of focus on air travel in the Asia-Pacific region.

Yet even as we reel from coverage of yet another accident, airlines are expanding rapidly, particularly in Asia-Pacific and the Middle East in order to meet unprecedented growth in passenger demand.

According to the International Air Transport Association (IATA), passenger numbers rose almost 6% for Asia-Pacific in 2014, and a staggering 13% jump for the Middle East that year. 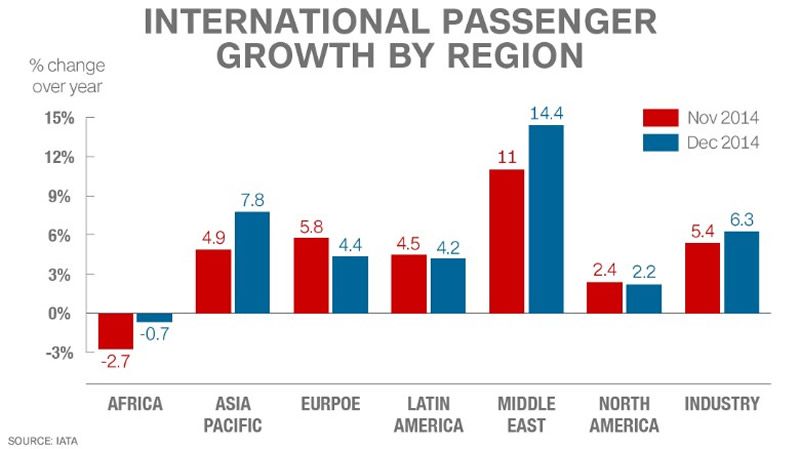 The big question is: Can carriers square this increase in demand with training commitments that don't compromise air safety and security?

IATA states that global passenger traffic grew 6.1% in 2014, which represents some 170 million more passengers than the year before.

IATA has stated that Asia-Pacific accounts for 31% of global air passenger traffic now, and in 20 years that figure is forecast to be 42%.

The Chinese market, particularly, drove growth in Asia. Dominated by domestic travel market, the IATA says it expanded by some 11% in 2014.

This all looks good, economically, for the airlines and the aircraft manufacturers, but there is a problem.

For every aircraft that is introduced to service an airline will need a minimum of six pilots on its staff to crew that one aircraft 365 days a year, around the clock.

They will also need engineers to maintain it, cabin crew to look after the passengers and manage safety on board and all the necessary ground staff to deal with operations, passenger services and cargo handling.

An efficient airline will operate with about 35 -- 40 staff per aircraft, and even more for the large B747 and A380-size planes, which can require more than 100 personnel per aircraft to allow round-the-clock operations.

There are mandatory age limits for senior airline pilots. That age was 60 until 2007 when ICAO recommended an increase to age 65, subject to satisfactory medical screening each six months.

Despite raising the retirement age, there are many "baby boomer" pilots moving into retirement and there are not enough young entrants to the profession to replace them.

Add the rapid growth rate in the industry and it becomes evident that there is a significant pilot shortage starting which is about to become more serious.

IATA has estimated that 19,000 new pilots need to be trained annually for the indefinite future to replace retirees and meet growth requirements worldwide. Some other industry organisations put this figure higher with emphasis on China, India and Indonesia.

Even if these pilots are trained and qualified, as with all professions, the new pilot graduate is faced with an experience problem: Airlines are seeking pilots with as many flying hours as possible.

A newly qualified pilot with a commercial pilot licence, (CPL) has only a basic qualification gained with approximately 220 hours of practical flight training experience, which would allow new pilots to join a charter company or small regional commuter airline as a junior pilot or co-pilot and to gain flight experience under supervision for as long as it takes to gain sufficient experience to move up the ladder.

This acceptable level of experience will vary from country to country and with the airlines, and will also vary with the demand for pilots at the particular time.

Route to the top

So, the traditional progression for a new pilot has often been from light aircraft charter operations to a "third tier" or regional commuter airline, operating aircraft such as twin turbine propeller aircraft like the ATR42 or SAAB 340 on short distance domestic services, and then to a major airline operating large jet aircraft such as the Airbus A320 or Boeing B737.

This might be with a so-called Low Cost Carrier (LCC) and will be as a co-pilot initially with promotion to captain on selection and with greater experience.

Since 2006, a new Multi-Crew Pilot Licence (MPL) has been under development by ICAO, IATA and training organisations. Students are now being trained and issued with this new licence in some countries.

The concept of the MPL is that the student pilot will be trained to be a co-pilot on a modern jet airliner and, essentially, to be the assistant to the experienced captain in the left seat.

IATA has stated that its goal is to increase the pool of candidates and training capacity whilst improving safety standards.

However, there is an argument that while traditional pilot training is not designed for modern high-tech aircraft it is still essential to teach basic flying skills, rather than leaving much of it to the computerized systems.

It is argued that they must be taught basic flying skills which are then supplemented, at a later stage, with the necessary training in the high-tech systems, in effect blending the old form of pilot training with the new systems.

The concern of many industry professionals is that it may leave the average pilot trainee short on essential flying skills which have been taught since the beginning of manned flight.

The MPL is understandably being promoted by aircraft and simulator manufacturers and airlines who need to get aircraft out of the factories and into service.

They are relying on modern technology and computers on board the aircraft to handle most aspects of flight control and safety and to automate and reduce pilot workload as much as possible.

However, there is now clear evidence that the IT systems cannot predict certain problems and a human element is essential to ensure safety.

There have been several incidents such as Air France 447, Qantas 32 and the recent TransAir ATR72 crash, which have proven that the computers are not capable of handling all emergencies.

The human pilot is still, at this point, an essential part of the safety system on modern aircraft, but it is a fact that the great majority of accidents are caused by human error of some kind, and the key to reducing human error is in the training and in gaining experience.

The new MPL co-pilots will be, in many cases, new recruits to the airline with as little as 12 months experience and basic flight training with a minimum of 240 flight hours. Some aircraft, therefore, will be flying with two pilots who, together, may have only six or seven years of flight experience between them.

Industry experts are concerned that if the older and experienced captain should run into some difficulty such as a medical problem, the young and inexperienced co-pilot will then become the commander of the aircraft and be responsible for landing safely.

Airlines will generally try to attract the most experienced pilots that they can find.

Since pilots perceive flying the big jets as being more interesting, prestigious and certainly better paid, it means that the major airlines which can offer prospects of promotion to the very large jets such as the Boeing 787, Airbus A350 or even the A380, will easily attract the pilots away from the smaller regional carriers.

The reality is that the charter operators and small regional carriers are the ones which will continue to train the new pilots and then lose them to the major airlines in an inevitable cycle that results in most of the experience being with the major airlines while many of those smaller regional carriers and LCCs are struggling to find enough pilots to crew their daily services.

Unfortunately, many of the accidents which we have seen in recent times are often associated with smaller regional airlines and low cost carriers. So, the question comes back to one of pilot training and engineering quality associated with some of these airlines.

The safety culture of the airline involved is also a critical factor in all accidents.

This is not well understood by most people and even within many airlines -- it starts with the senior management, at CEO and board level.

When pilots and engineers are subject to pressure to save money at every turn, it can and will have an impact on their decisions regarding safety. Pilots should never be expected to fly into marginal weather conditions, or to avoid making a missed approach to a runway when conditions to land are not ideal, because of pressures to save on fuel costs.

Considerations of costs and job security have caused accidents and cost lives and there are plenty of examples of such incidents in the accident data available at ICAO.

The need is to manage the industry's growth safely, with great emphasis on the quality of training and how the new recruits gain experience in their various fields.

At the end of the day, however, it must be realized -- by all interested parties -- that having an accident is far more costly to an airline than maintaining high levels of operational safety and security.

Desmond Ross is a former pilot and current principal of DRA Professional Aviation Services, an international consultancy for airlines and aviation authorities. He is an experienced international pilot and air traffic controller, and is a former airport director. He was also head of the Pacific Aviation Safety Office. The views expressed here are solely his.