What is the state of democracy around the world?

Many observers have been sounding alarms about a global wave of populism that has surged through Europe and the Americas. Others worry about recent erosion of democratic safeguards in particular countries like Poland, Hungary and Venezuela. Headlines announce crises in corruption, migration, conflict, security and elections. But is democracy really on its last legs?

Maybe not. Data from the Lexical Index of Electoral Democracy show that in 2016, no less than 68 percent of the world’s countries — home to 62.2 percent of the world population — government power is determined by genuinely contested elections. That’s actually an increase from 62 percent in 2006. What’s more, 56 percent of the democracies established after 1975 have not seen democratic reversals. No country with over 40 years of electoral democracy — with the prominent exception of Venezuela — has slid back into nondemocratic governance. Democracy remains the most widespread and legitimate form of government.

But how is democracy doing beyond elections?

To answer that question, the International Institute for Democracy and Electoral Assistance is releasing on Wednesday a newly developed “Global State of Democracy (GSoD) Indices.” These sets of novel indices cover 155 countries between 1975 — 2015. Its goal is to provide a nuanced picture of the global state of democracy.

International IDEA’s broad understanding of democracy is grounded in two principles: 1) popular control over public decision-making and decision-makers, and 2) political equality among those who exercise that control. We further break these principles down into five democratic attributes: representative government, fundamental rights, checks on government, impartial administration and participatory engagement. These are measured using 98 empirical indicators from 14 data sources. 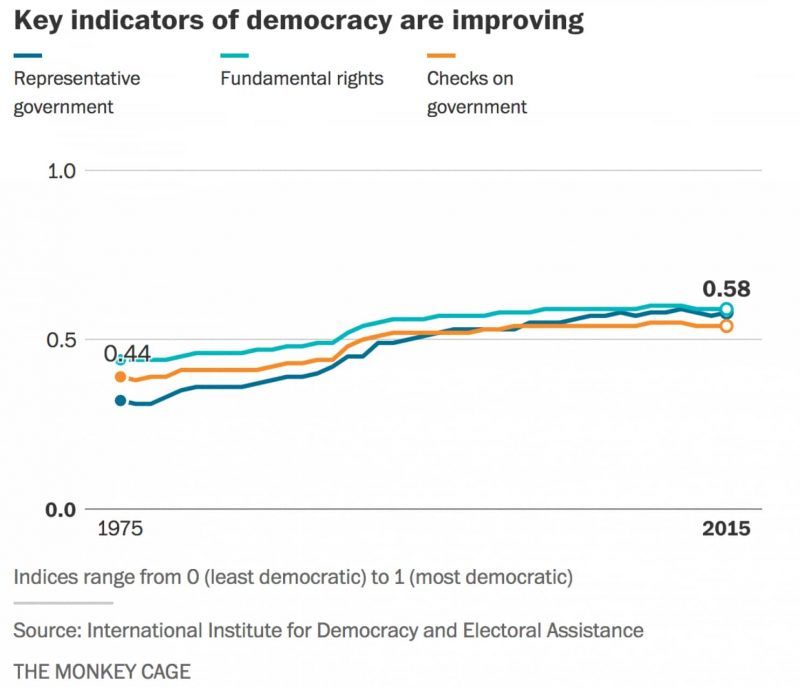 And we bring good news. Looking through this complex viewfinder, the GSoD Indices show that democracy has made considerable progress since 1975 — and the world continues to see stable levels of democracy.

We can see that particularly in global levels of representative government, where we measure whether the public has control over decision-makers. The data reveal that not only has there been an increase in the number of elections being held around the worlds since 1975, but there’s also been higher quality of elections, with lower levels of fraud, manipulation and irregularities.

Overall, fundamental rights are being better respected — albeit with great variation among nations

Our measure of fundamental rights examines whether citizens can exercise political freedoms. Overall, more global citizens have such rights than in years past. But there’s a big caveat: While some nations’ citizens see their rights far more respected than before, others have lost ground. For instance, political rights expanded for citizens in Mongolia, Senegal and Uruguay and more recently in Gambia and Nigeria while they have eroded in Hungary and Poland.

Within that category, we measured a few particular things that improved steadily since the 1980s: More and more people around the world live in places where their access to justice, civil liberties, social rights and equality are treated with respect.

Checks and balances on government power have increased since 1975

Overall, we saw more judicial independence, as well as more freedom for the news media to scrutinize the exercise of power. But once again, the picture is very mixed from one nation to the next — sometimes even within the same region. For instance, Myanmar, Nepal and Tunisia gained more government accountability. On the other hand, in Burundi, Ecuador, Nicaragua, Macedonia, Thailand, Turkey and Venezuela, governments with authoritarian tendencies have been limiting or eliminating competing sources of power, like legislatures, judges or autonomous media.

Our attribute called “participatory engagement” measures how much people use existing political channels, like getting involved in civil society groups and voting in national elections. Once again, there have been improvements in some countries and declines in others — and on average, a larger share of people is politically engaged than in 1975.

In several African and Asian states, including Côte d’Ivoire, Liberia, Myanmar, Nepal and Tunisia, civil society has gotten more active. But in other nations, including Azerbaijan, Egypt, Russia and Turkey, governments have clamped down on civil society and driven down public involvement.

Since 2005, the share of citizens going to the polls has dropped in several countries, including Bangladesh, Cyprus, Greece, Guinea and the United States. But that’s balanced by major increases in other countries, including Angola, Myanmar and Nepal, often because elections have been introduced or brought back.

In Europe, voter turnout has dropped in a few established democracies, including France, Switzerland and the United Kingdom. But voter turnout across Europe as a region remains above the global average. Any drops in individual countries have been countered by increases in Asia and the Pacific region, and in Latin America and the Caribbean.

Corruption and unequal enforcement of the laws have remained roughly stable

The global level of the what we call “impartial administration” — which measures the absence of corruption and predictable enforcement of the rule of law — has remained steady overall since 1975. Since 2005, a number of countries, including Côte d’Ivoire, Gabon, Guinea, Latvia, Kyrgyzstan, Nigeria, Sri Lanka and Tunisia have made substantial progress in fighting corruption and ensuring more predictable law enforcement. Still, many countries are struggling to successfully implement the rule of law in public administration — and the corruption and ineffective public administration arguably feed public dissatisfaction with political parties, legislatures and governments.

So, what can we say about the state of democracy around the world?

The GSoD Indices shows us that since 1975, democratic progress has been made in four out of the five democratic attributes that we measure.  While there’s variation among nations, overall, the most recent decade has seen not democratic decline but stability overall. Thus, the gloomy discourse on democracy dominating today is exaggerated.

Mélida Jiménez is a program officer in International IDEA’s Democracy Assessment, Analysis and Advisory unit, and one of the contributors to the Global State of Democracy Indices.