Recent events such as the election of Donald Trump as president and the rise of right-wing extremists in Europe have led to gloomy commentary about the state of democracy. For example, people have argued that liberal democracies are at risk of decline, that support for democracy is being eroded by the conflict between values and expertise, and that democratic backsliding has already occurred in a number of countries.

Is this pessimism warranted? Not quite. Although the average level of democracy in the world has declined to where it was 10 to 15 years ago, the decline is moderate. The world remains more democratic today than it was before the end of the Cold War. A nuanced look at the data suggests that the declines are limited to certain countries and even to certain domains within those countries.

There are still reasons to be worried, though: The quality of democracy has declined in more countries than it has improved in over the past five years.

These conclusions are based on new data released by the Varieties of Democracy Project. The V-Dem Project surveys about 2,800 experts and asks them to assess the nature and development of democracy in more than 177 countries from 1900 to 2016. The value of experts is that they can distinguish between real and fake democracies. For example, most countries today hold elections, but some of these elections are free and fair while others merely legitimize dictators.

Of course, expert assessments are necessarily subjective. Therefore, V-Dem normally asks five experts to evaluate each country on each of many characteristics that characterize democracy. V-Dem then aggregates the expert assessments using a statistical model. V-Dem also provides an estimate of uncertainty that reflects how much the experts disagree. When we speak of “significant” changes in democracy, we refer to changes that are visible even after taking this uncertainty into account.

In its first report, V-Dem dissected and evaluated global trends based on several indices created from these data. Here, we focus on the Liberal Democracy Index, which captures whether there are free and fair elections, leaders are constrained by the rule of law, parliamentary and judicial oversight and civil liberties are protected.

The global trends in democracy

The trends in the Liberal Democracy Index are presented in the graph below: 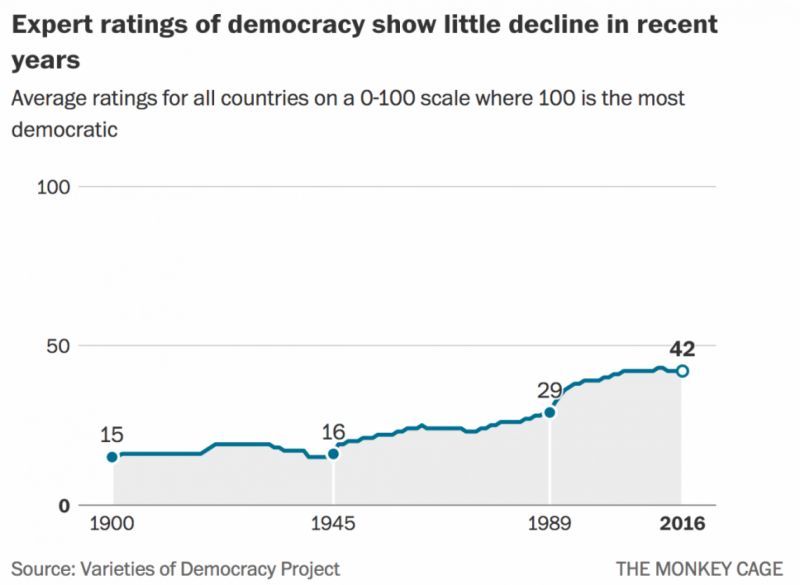 As the graph shows, the average level of democracy grew considerably between 1970 and 2010, especially after the end of the Cold War. There has been only a slight decrease in recent years.

One example of a country whose score declined is Thailand, in which the military staged a coup in 2014 and suspended the constitution. Another is Poland, where the Law and Justice Party is blatantly undermining the constitution. A third is Turkey, which has seen President Recep Tayyip Erdoğan purging the ranks of opposition members and establishing a stronghold over the country.

Among the countries whose scores have increased is Tunisia, in which a popular revolution led to elections and a peaceful transfer of power. It is arguably a success story of the Arab Spring. There were also increases to above the world average in Georgia, which implemented economic reforms aimed at tackling corruption, and in Sri Lanka, where a new government reportedly is committed to transitional justice and restoring rule of law.

A concern of commentators is that democracy is declining even where it was thought to be firmly established: in Western Europe, the United States and Canada. Below is the trend in the Liberal Democracy Index in these 22 countries. 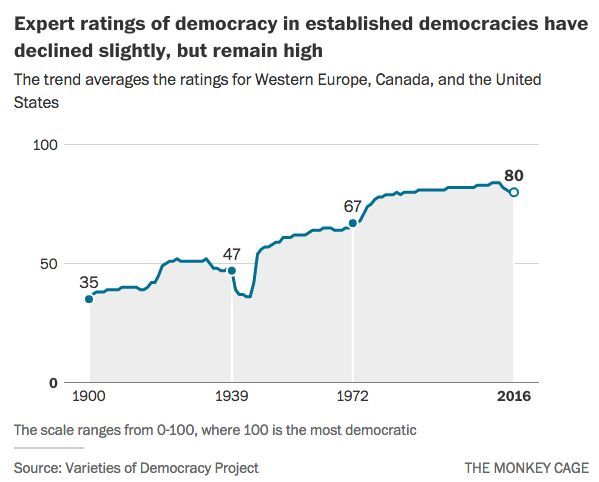 After a steep decline during World War II, democracy recovered quickly and surged above 80 points with the expansion of civil liberties and the fall of Southern European dictatorships in the 1970s. But since 2012, there has been a significant decline, from 84 to 80 points.

This decrease is present in every country except Canada, although in most countries it is not significant either because the decline is small or because experts disagree.

The United States, however, is the only advanced democracy that has experienced a significant decline in five years — a drop of nine points. 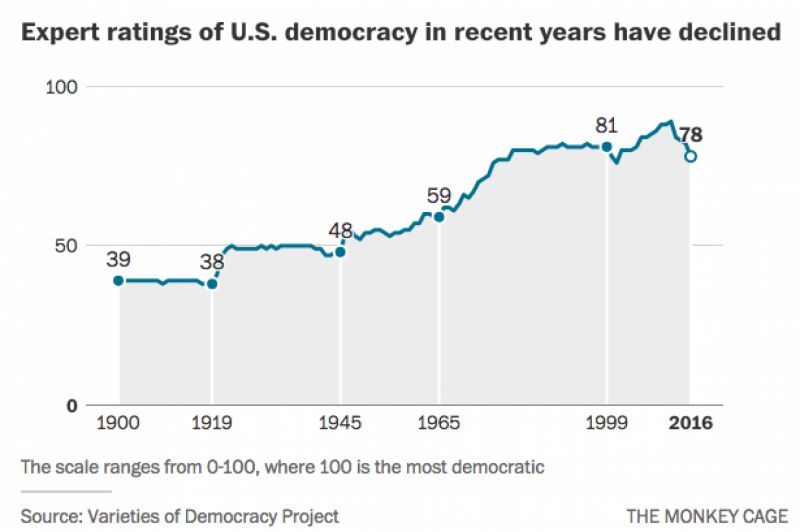 What has changed in the United States

A deeper look at the status of liberal democracy in the United States suggests that three things have suffered in recent years: the quality of elections, media reporting and government oversight. We can break down the Liberal Democracy Index into its two components: (1) the Electoral Democracy Index, which captures clean elections, freedom of association and expression, and whether there are alternative sources of information; and (2) the Liberal Component Index, which captures equality before the law, individual liberties, and legislative and judicial constraints on the executive.

From 2011 to 2016, most of the significant declines involved electoral democracy. Experts rated the United States less favorably in the freedom and fairness of its elections, the intimidation of opposition parties by government officials, media bias in coverage of political candidates, the range of perspectives in the media and media self-censorship. Anecdotal evidence that supports these declines concerns voter ID laws, media censorship and gerrymandering practices.

In terms of the liberal principles of democracy, experts rated the U.S. less favorably in freedom of religion, compliance with high court decisions, and the extent to which the executive is held accountable by oversight agencies. Note that these assessments predate the Trump administration, but the drop in freedom of religion in 2016 probably reflects his electoral campaign. The results, however, suggest that any challenges with U.S. democracy are not simply a function of Trump himself.

But all this warrants caution, not alarmism

Clearly liberal democracy is facing challenges in some countries — in particular in the United States. Therefore, U.S. political scientists are right to be on alert and continuously monitor the weak points of their democracy. In some places, it is even worse: Countries such as Turkey or Venezuela have experienced serious breakdowns.

But the V-Dem data suggests that alarmist reports about a global demise of democracy are not yet warranted. For one, the average level of democracy in the world is still close to the highest recorded level, even if a slight decline is detectable over the last few years. And there are real success stories, like in Tunisia, even if those do not make as many headlines.

Although the declines in democracy in places such as Europe and the United States deserve our attention, the V-Dem data suggest that political institutions in these countries are relatively resilient. Recent examples include the electoral victory of Emmanuel Macron against Marine Le Pen in France and judicial challenges to the immigration ban proposed by President Trump.

Ultimately, citizens in advanced democracies should remain vigilant against democratic backsliding but we should also celebrate major gains in the quality of democracy among less democratic countries.