Early Wednesday morning in Zimbabwe, Major General Moyo of the Zimbabwe Armed Forces announced on national television that President Robert Mugabe and his family were safe and that the military would be “targeting criminals” that are “causing social and economic suffering in the country.”

Moyo took pains to clarify that this was “not a military takeover of government.” The ruling ZANU-PF party’s youth league later tweeted out its own reassurances: 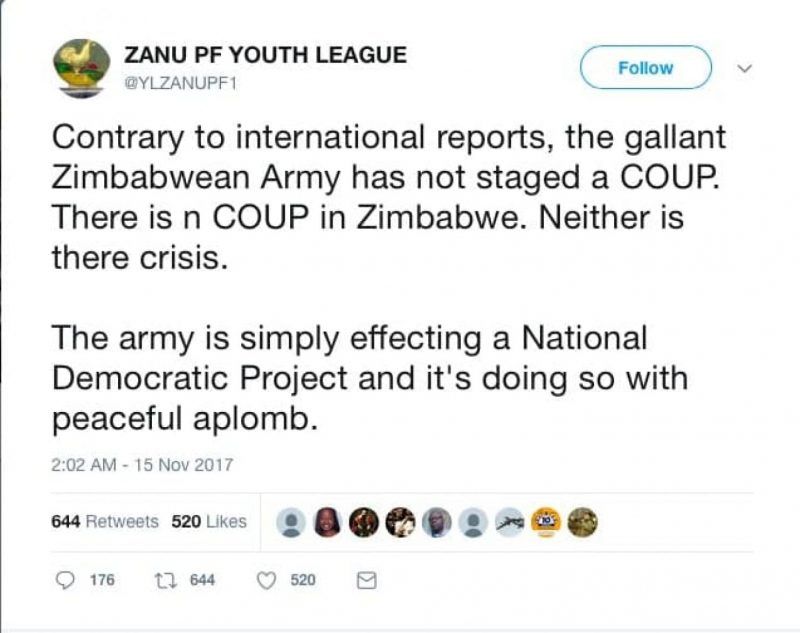 Coup or no coup?

Poetic language notwithstanding, it was clear to many observers that events had unfolded according to the standard coup playbook. Military actors associated with Army Chief General Constantino Chiwenga and recently ousted Vice President Emmerson Mnangagwa had taken control, with soldiers in charge of the broadcasting building, parliament, courts, president’s residence and other symbolic locations in the city. President Mugabe and his wife, Vice President Grace Mugabe, were under house arrest, and the military had arrested a number of her key allies.

Even the statement that the president is safe is standard boilerplate, and ironic at that. After all, if Mugabe were truly safe he would have told the nation himself, at a more conventional hour.

That said, there have been cases in other countries when the military stepped in but stopped short of taking over — instead extracting concessions from the government and then returning to barracks. This is rare, because once challengers have revealed their willingness and ability to threaten the government, they have sacrificed the advantage of surprise and leave themselves open to later reprisal.

These incidents usually result from the government’s failure to pay the military, resulting in a spontaneous mutiny that is resolved by credible assurances of both impending payment of arrears and immunity from sanction.

Situations where challengers use the threat of force to obtain something other money do not always end in a stable negotiated settlement, in part because any initial success will embolden the challengers to try again, resulting in either a takeover or in them going too far. For example, in 1987 a faction of the Argentine Army mutinied to stop trials of military officers for human rights abuses during the previous military government. However, the success of this mutiny produced another one in 1987, with more expansive demands, and a third in 1990, after which point the ringleaders were finally arrested.

So if there already has been a coup in Zimbabwe, why then is General Chiwenga’s faction pretending there has only been peaceful aplomb, and why is he negotiating with Robert Mugabe? Why was Mugabe at liberty to deliver a speech at a university commencement?

What leverage does Mugabe have?

Mugabe’s leverage in this situation stems from a few sources. The first is the very strong norm against coups. If the situation is perceived as a coup and not a “bloodless correction,” Zimbabwe might be denied economic aid from Western countries. And it might also be expelled from the African Union.

Second, senior officers allegedly consulted with South Africa before intervening, and received the go-ahead as long as they could claim it was ‘broadly constitutional’ — and there was no risk of unrest spilling across the border.

A third factor is that Zimbabweans support civilian rule and democracy by a substantial margin. A government produced by coup would have less support among the citizenry. Mugabe’s leverage also stems from the historic respect for him among African leaders and his ability to bestow substantial legitimacy within the party to a successor he approves.

What happens next could get tricky.

Right now, there are peaceful efforts to pressure Mugabe to exit: all 10 of the regional ZANU-PF party organizations have called for Mugabe to step down, and a massive demonstration in the capital is planned for Saturday to call for Mugabe’s resignation.

However, if Mugabe remains intransigent, it is likely that those in de facto control of the country will be willing to move on without him.

Here the story of Emperor Haile Selassie offers a cautionary tale. Since Ethiopian monarchs trace their lineage all the way back to the Queen of Sheba, the crown comes with significant symbolic weight. Consequently, when the group of military officers known as the Derg gained control in June 1974, they left the emperor in place at first.

But even in Ethiopia, the emperor found himself formally deposed by September, his title having protected him only for a short while. As Emperor Selassie found out, a deposed ruler, even a highly respected one, has only a little leverage.

With Chinese economic support and the endorsement of the ruling party, the coup makers may decide they will have enough domestic and international legitimacy to proceed without Mugabe’s blessing. They could respectfully designate him honorary president-for-life, knowing that at age 93, he may not retain the title for long.

Naunihal Singh is an assistant professor in the National Security Affairs Department at the U.S. Naval War College in Newport. The opinions expressed are his own, and not those of his employer. He is the author of Seizing Power: The Strategic Logic of Military Coups.