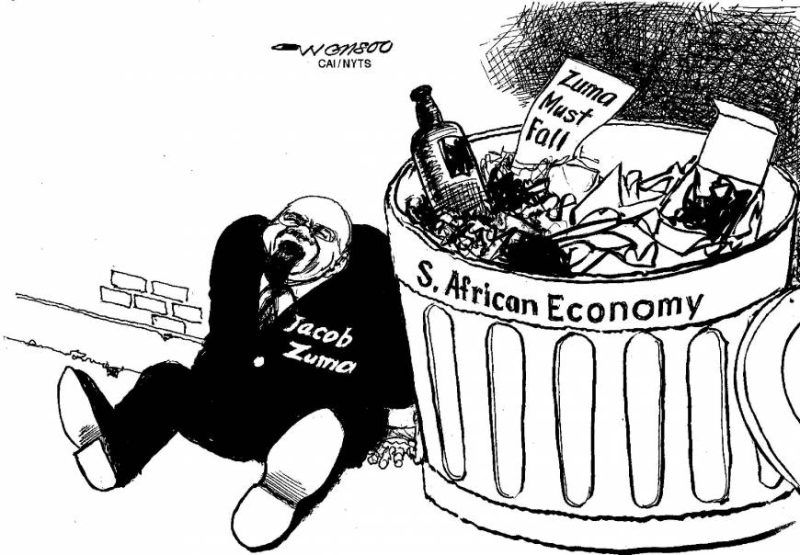 South Africa is now verging on the status of economic basket case. GDP growth last year was around half of one percent, the country’s currency has been in free fall for the past year, and its bonds face an imminent downgrade to “junk” status. So is the South African economy doomed to a long period of low or no growth no matter who is in charge — or is President Jacob Zuma to blame?

“Zuma is no longer a president that deserves respect from anyone,” said Julius Malema, leader of the Economic Freedom Fighters (EFF) party, in South Africa’s parliament last month. And as Zuma tried to give his eighth State of the Nation speech (he became president in 2009), the EFF members of Parliament chanted “Zupta must fall”. (“Zupta” is a reference to Zuma’s close ties with the immensely wealthy Gupta family).

Julius Malema does not qualify as an unbiased observer, but his view of Zuma is shared right across the political spectrum in South Africa and beyond. “No-one believes anything he says,” concluded veteran political analyst William Gumede. And yet Zuma continues to be in charge of Africa’s largest economy — which is now deteriorating practically by the day.

Post-apartheid South Africa was never a great economic success. After the end of apartheid in 1994, there were high hopes that the economy would grow at 6 percent annually or better and create half a million new jobs a year. In reality, growth averaged just over 3 percent in the next decade — and then fell off a cliff after the global financial crisis of 2008.

South Africa joined Brazil, Russia, India and China as a member of the BRICS in 2010, but it didn’t really qualify. While its fellow BRICs powered through the great recession of 2009-2012 with undiminished growth rates, South Africa’s economy fell to 2 percent growth a year, then one percent, and now half a percent.

It is no crime that Zuma was born poor and never went to school. Neither is it a crime that he has never worked in the private sector: All his jobs, from the age of 16, have been in the service of the now-ruling African National Congress (ANC). But it is remarkable, given these facts, that he has nevertheless become very rich (at least $20 million).

Zuma has never been jailed for corruption, but his principal financial adviser, Schabir Shaik, was sentenced to 15 years in prison in 2005 for corruption and fraud. The judge said that the evidence of a corrupt relationship between Shaik and Zuma was “overwhelming,” and Zuma was immediately fired as deputy president by then-president Thabo Mbeki.

Police raids on two of Zuma’s homes yielded evidence that led to charges of money-laundering and racketeering in connection with a multi-billion dollar arms deal. Just three days before Zuma was installed as president in 2009, the charges were dismissed on grounds that the evidence had been tampered with, but a recent High Court decision has reinstated the charges.

Then there was the Nkandla scandal, in which Zuma got his government to pay for the $23 million expansion of his country home in KwaZulu-Natal. (He was eventually forced by the courts to pay back some of the money.)

Or consider the astounding events of last December, when South Africa had three ministers of finance in the same week.

The first finance minister, the widely respected Nhlanhla Nene, had annoyed Zuma by refusing to approve some very large contracts in nuclear energy and the state-owned airline. (Nene may have suspected that big kickbacks were involved.) So he was dismissed.

The second finance minister was David van Rooyen, an unknown party wheelhorse with no financial experience. It was soon discovered that he had close ties to the Gupta family, which gave rise to speculation that Zuma was helping the Guptas to capture control of the state’s financial policies. He was forced to resign after four days.

The third man, Pravin Gordhan, was respectable and competent, but by then South Africa’s stock market had collapsed, its currency had tanked, and the Standard and Poor’s ratings firm had reduced the country’s credit rating to just one notch above “junk” status.

So Zuma does bear the blame for the collapse in international confidence in the South African economy — but not for its long-term failure to grow as fast as was expected. What is to blame for that?

South Africa was already a developed country when apartheid ended. It was a very strange sort of developed country, with around 10 million people living in a modern economy among 30 million others who filled menial roles or lived by subsistence farming. But it was already urbanized, already industrialized, and therefore not eligible for the once-only bonus of high growth that some big “emerging economies” enjoyed.

The best that South Africa could ever have expected was the 3 percent growth that it had in 1996-2008. That would have been barely enough to meet popular expectations for rising living standards. The main cause for its failure to meet those expectations, and for any political upheavals that may subsequently ensue, is Jacob Zuma.

Based in London, Gwynne Dyer is an independent journalist and military historian whose syndicated columns are published in 45 countries around the world.