On a recent afternoon, I found myself squeezed into the back seat of a car, one of about 50 vehicles in a procession recklessly speeding through the Afghan capital. The passengers — all men, all members of Afghanistan’s Shia Muslim minority — were headed toward the Kart-e-Sakhi shrine, where the previous night a suicide attacker loyal to the Islamic State, the radical Sunni group, had killed more than a dozen Shias.

In the front, three men occupied the passenger seat, limbs splaying out of the open door. The cars raced through the streets, forcing traffic to halt and make way. The black-clad men thumped their chests in religious fervor, shouting “Ya Hossein” in allegiance to the Shias’ third imam and waving flags depicting children in green headbands that said the mourners belonged to the “House of Hussein.” The scene had the marks of a sectarian conflict in the making. In fact, that was just what they were determined to prevent. 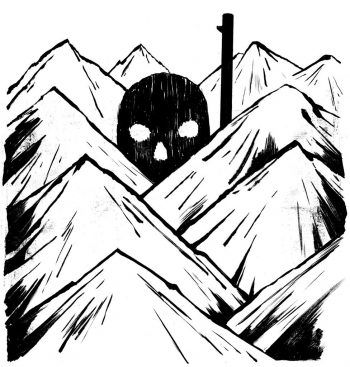 It was Oct. 12, and Ashura, the holiday when Shias commemorate the martyrdom in 680 A.D. of Imam Hussein, a grandson of the Prophet Muhammad and, according to them, his rightful heir. (Shias believe the prophet chose Hussein’s father, Ali, as his successor; Sunnis believe he picked his own father-in-law, Abu Bakr.) The men I rode with were intent on mourning their fellow faithful the same way they emulate the suffering of their imam: by self-flagellating with fists, chains and knives.

Afghans have lived through decades of conflict but have largely been spared the kind of sectarian war that ravages other countries in the region, such as Iraq and Pakistan. The Islamic State, also known as ISIS or ISIL, has seemed intent on changing that since it surfaced in Afghanistan last year, when pockets of fighters in the eastern part of the country started pledging allegiance to the group.

Militants loyal to the Islamic State have now taken the fight to the capital: Over the past few months, they have carried out three massive attacks on Shia civilians in Kabul, including one last week that killed more than 30 people. At no point since a mass execution by the Taliban in Bamiyan province in 2001 have Afghanistan’s Shias been as targeted as they are now.

Estimates vary — there has been no census since 1979 — but Shias are generally believed to constitute up to 15 percent of the Afghan population. Most Afghan Shias are ethnic Hazaras and mainly reside in Kabul or the central highlands. Many Hazaras pride themselves on holding comparatively liberal social views, but partly because of ethnic discrimination they also often belong to the lower economic rungs.

The Taliban, who remain Afghanistan’s main armed opposition group, tend to view Shias as apostates, but they do not systematically persecute them. One reason may be that the Taliban are rooted in local, rural communities. They wage armed jihad but are also a nationalist, political movement that in certain areas strives to be perceived as a better provider of services and security than the government in Kabul.

The Islamic State doesn’t have such concerns. Whereas the Taliban presumably still hope to govern Afghanistan one day, the Islamic State’s goal is to destroy the nation state and make it part of a transnational caliphate. The Afghan government estimates that 90 percent of Islamic State fighters in Afghanistan are foreigners — they also include a few former Afghan Taliban — and that the Islamic State leadership here is mainly Pakistani.

The Kart-e-Sakhi shrine sits in the middle of a sprawling cemetery at the bottom of Kabul’s TV Hill, named after the antennas poking out of its peak. Headstones dot the landscape like the scattered timber of a wreckage on a beach. On weekends and holidays, the area doubles as a fairground, complete with Ferris wheels and balloon sellers.

When our Ashura procession pulled up outside the mosque, hundreds of men spilled into the courtyard and stripped down. They brought out chains with five-inch blades and started whipping their bare torsos. Boys, some looking as young as 10, with thin arms and backs with no trace of muscle, swung the chains up high and brought them down, cutting their skin open with every strike.

Many Shias find the ritual archaic and repulsive. But for those who partake, from Iran and Afghanistan to Pakistan and India, self-flagellation is the purest form of worship.

For many years, the Ashura rituals were kept underground, and during the Taliban regime, in the 1990s, many Shias fled to Iran. But the ouster of the Taliban in 2001 heralded new religious freedoms. This year in Kabul, the Ashura ceremony was also a way for the mourners to protect their religious expression and to defy the threat posed by the Islamic State.

“In the past, we have been used to political and tribal war,” Sayed Yusuf Hosseini, the head cleric at the Kart-e-Sakhi shrine, told me. “But we did not experience religious war.”

I met Mr. Hosseini a few days after the Ashura attack in his office, which smelled pleasantly of rose water and overlooked the mosque’s courtyard. Mr. Hosseini, 35, was dressed in a crisp white tunic and black vest, and had a ring with a big yellow stone. He was shaken by the recent killings, yet sounded confident. “The enemy is trying to bring religious divisions,” he said, referring to the Islamic State, “but it will be impossible for them.”

The Islamic State did try again. On Nov. 21, a suicide bomber killed more than 30 worshipers in another Shia mosque in Kabul. The Islamic State claimed to have sent him. Counting this attack, the Ashura attack in October and another bombing in July, the group has killed at least 125 people while targeting Shias in the capital.

These strikes only seem to have brought Afghan Sunnis and Shias closer together. On social media, the dominant sentiment among young Afghans is one of solidarity. The Shias I traveled with on Ashura did not seem animated by revenge. The Islamic State may hope to trigger a religious war here, but at least for the moment the Afghan people seem unwilling to take the bait.

If anything, the emergence of the Islamic State in Afghanistan may present an opportunity for the Taliban, and the Afghan government: The Taliban are by no measure a harbinger of modernity, but they are, by comparison with the Islamic State, moderate and more in sync with the population.

When future peace talks between the Taliban and the Kabul government get underway, success will depend on the two sides’ capacity for pragmatism. The Taliban have already shown such an inclination, for example by teaming up with Iran, a Shia state and a historical foe, to fight the Islamic State in Afghanistan. Now, thanks partly to the popular reaction to the Islamic State, the Taliban may have come to realize that, to be a legitimate part of modern Afghanistan, they must make space for the country’s Shias, too.

Sune Engel Rasmussen is a journalist living in Kabul.