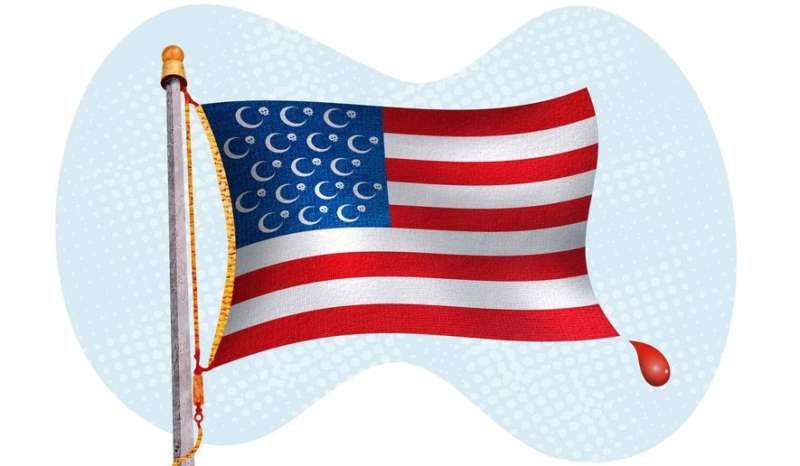 A comprehensive strategy to defeat Islamic supremacists must include not only a war plan to defeat the enemy on the active battlefields of the Middle East, but it must also address how to defeat this enemy now inside the United States.

Such a strategy must start by recognizing that there is a Global Islamic Jihad Movement which is carrying out attacks in the United States, e.g., Sept. 11, Ft Hood, Boston, San Bernardino, Orlando, New Jersey, New York and Minneapolis. This Islamic Jihad Movement is operating on the al Qaeda seven-phase timeline for the conquest of Western Civilization. For example, Phase Four (2010-2013) was to bring about the collapse of hated Arabic governments, such as Egypt, Iraq, and Libya, a goal which was accomplished successfully with the help of the Obama administration.

Phase Five (2013-2016) involved the declaration of an Islamic caliphate. This was accomplished by conquering significant territories in Iraq and Syria and attracting pledges of loyalty from West Africa to the Philippines. We are now in Phase Six (2016-total confrontation), which is a fight between the “believers and non-believers.” It must be recognized that this is a war that has been going on for nearly 1400 years. Mosques and Islamic centers are the command and control centers for jihad here in the United States. There are over 2400 mosques and Islamic centers in the United States. We know some 80 percent of them advocate or support jihad. Islamic cells and networks, many linked to the Muslim Brotherhood, are operating throughout America.

In order to develop an effective strategy, there must be a recognition of the Islamic supremacists’ key organization in the United States. This is embodied by the Muslim Brotherhood and its so-called civilization jihad strategy until ‘zero’ hour, when the war goes ‘hot’ (Phase Seven). Each year there are between 70 and 120 new Islamic non-profits created (with no IRS problems) that work in conjunction with the Muslim Brotherhood. The Islamic movement in the United States is deeply embedded with thousands of organizations. The Muslim Student Association serves as a recruiting arm with over 700 chapters in major universities. These organizations are well-funded by Iran, Saudi Arabia, Qatar, et al.

Muslim Brotherhood jihadists have been able to penetrate the senior levels of our government. That penetration of our government agencies actually started over 50 years ago but has greatly accelerated under the Obama administration. They have been very successful in penetrating government agencies including security and intelligence where they have been able to influence our domestic and foreign policies. Specifically, they have been able to achieve the purging of any federal training curricula that accurately links Islamic doctrine, law and scripture with terrorism under the guise that factually proven information is found to be “offensive to Muslims.” This denied key information on the enemy not only to our military personnel but law enforcement agencies down to the local police departments. Further, they have successfully restricted local law enforcement’s ability to conduct critical surveillance and monitoring of mosques and Islamic centers.

Complicating the situation is the fact that the Obama administration is now bringing in tens of thousands undocumented shariah-compliant Muslims and settling them throughout the country. Why would the Obama administration do this, when they know that migration is part of the jihad doctrine? It’s called “hijra,” which refers to the symbolic original migration of Muhammed from Mecca to Medina. Therefore, for those who make the “hijra” into non-Muslim countries masquerading as refugees are preparing for the “final phase,” which is armed conflict.

The strategy to successfully defeat the Islamic supremacists’ plan for the United States must directly confront the enemy. First and foremost, the Muslim Brotherhood must be designated a terrorist organization. The 2008 Holy Land Foundation Trial must be reopened in order to prosecute the unindicted co-conspirators beginning with CAIR and ISNA. Local police departments must be unshackled to carry out their critical penetration and monitoring of mosques and Islamic centers. The 80 percent of mosques that preach sedition must be closed and their imams either deported to their country of origin or prosecuted. In order to increase the deterrence level against the Islamic supremacists who would or are planning to conduct terrorist attacks in the United States, the penalty must be very clear. The mantle of trying to use “freedom of religion” as a justification for a terrorist act has no basis under the Constitution. To any thinking person, it should be clear that Islam is a totalitarian ideology masquerading as a religion and bent on world domination. Therefore, the following declarations and actions based on a presidential Executive Order must be taken against Islamic supremacists, including U.S. citizens.

• If an individual has conducted or is planning to conduct a terrorist attack in the United States, evidence demonstrates a decision to join the enemy. That individual has placed himself in the same category as a military person who has deserted to the enemy. Such an individual must be classified as a traitor and be categorized as an “enemy combatant.”

• Being designated an “enemy combatant” when captured, such a person would immediately be shipped off to GITMO for intense interrogation to determine the full support network and any other accomplices.

• Once the network is identified, then those involved should be prosecuted to the full extent of the law and, and if appropriate, returned to their country of origin. Likewise, those who joined ISIS on the battlefield should not be permitted back into the country.

Such action as proposed above would significantly raise the level of deterrence in the United States.

James A. Lyons, a retired U.S. Navy admiral, was commander in chief of the U.S. Pacific Fleet and senior U.S. military representative to the United Nations.