Although once commonplace, military occupation is rare in today’s world. A half-century-long occupation, like Israel’s control of Palestinian territories captured in 1967, is even rarer.

In public, Israeli governments have described the West Bank and East Jerusalem as “disputed” rather than occupied territories, justifying their actions under the branch of international humanitarian law (IHL) that regulates belligerent military occupations. A main requirement of this law is that occupation be temporary. But can a 50-year-long occupation be considered temporary?

In my new book (A Half Century of Occupation), I describe how the “Shamgar Doctrine” — which I name after Meir Shamgar, the military’s general advocate during the 1967 war and the president of the Israeli Supreme Court in the 1980s — justifies and legalizes this apparent contradiction. According to Shamgar, “pending an alternative political or military solution, this system of government could, from a legal point of view, continue indefinitely.” Defining an occupation as permanently temporary perpetuates it and provides the legal and psychological tools to buttress its architecture.

The occupation is temporary and will always remain temporary

The Israeli Supreme Court explicitly bases many of its decisions on the premise that Israeli occupation remains temporary. This elastic concept of time was already on display in the 1979 Bet-El ruling, in which Justice Miriam Ben-Porath suggested that “permanent community” was, in fact, a “purely relative concept.”

The Supreme Court justifies its consent to the construction of settlements by citing that belligerent occupation under IHL is temporary. Since settlements cannot continue past the end of the occupation, by extension they must also remain temporary.

The illusion of the occupation’s temporariness contributes to its perpetuation. As long as it remains “temporary,” the occupation can be viewed as a historical incident and the Occupied Palestinian Territories can be considered outside the boundaries of Israel.

Because this temporal divide is imposed on a geographical one, Palestinians in Gaza and the West Bank remain invisible to most Israelis, even after a half-century of occupation and even to those — such as members of the security forces and settlers — who come into daily contact with them. For all practical purposes, I wish to suggest, they resemble the internally displaced Palestinians, or “present absentees,” in Israel after the 1948 War.

Splitting time and space in this way — permanent on one side of the Green Line, temporary on the other — removes the need, or even possibility, to feel responsible for the circumstances under which occupied Palestinians live. Temporariness at once constitutes Palestinians as the subjects of Israeli colonial rule while denying such colonialism exists. Temporariness allows Israelis to bracket their participation in the occupation and permits the continued domestic and widespread international acceptance of Israel as a democratic state.

Many critics of the occupation believe that extensive Israeli settlement in the West Bank has sought to make the occupation irreversible. However, an examination of long-term trends shows that Israeli colonization is running out of steam.

The built-up area of the colonies takes up 2 percent of the West Bank. Most settlers commute to Israel for their employment. Those who do work in their settlements are employed in inflated educational, security and service jobs. The few hundred engaged in agriculture employ Palestinians to do the actual labor.

The demographics of the West Bank have hardly changed in favor of permanence. The original Likud settlement plan from 1981 projected that by 2010 1.3 million Jews would live alongside 1.8 million Arabs in the West Bank. In mid-2016, only 405,158 Jewish settlers resided in 126 settlements, making up 13.8 percent of the region’s population, compared to the nearly three million West Bank Palestinians.

Growth rate of settler population is in decline

Even more striking, the annual growth rate of the settler population shows a long-term decline from about 10 percent in the 1990s, to 5.3 percent in 2009 and 3.9 percent in 2016. Notably, almost 80 percent of the Jewish population increase in the West Bank comes from natural growth, since Israelis from across the Green Line aren’t moving to settlements as in past decades. 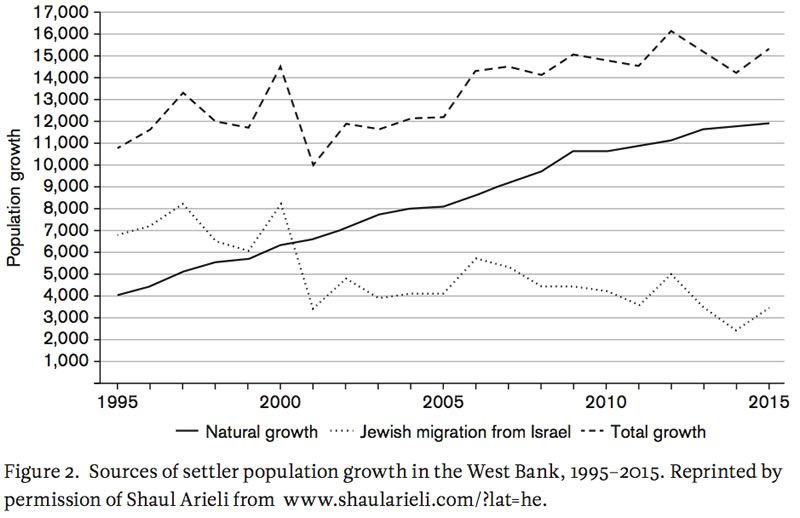 There are, of course, a few exceptions, including the ring settlements of East Jerusalem and three settlement blocks. The majority of Israeli settlers live in the Gush Etzion, Givat Ze’ev and Modi’in Ilit blocks that lie alongside the Green Line and were on the table during the Olmert-Abbas territorial exchange negotiations in 2008.

According to my calculations, the removal of 27,000 settler households (including the town of Ariel) would enable the Palestinian National Authority to exchange 4 percent of the West Bank in return for 4 percent of Israel’s territory adjacent to Gaza and the southern Hebron region. This percentage was agreed to in unofficial talks between Abbas and Israeli opposition leader Yitzhak Herzog in April 2014. A potential peace accord could be based, as demanded by the Palestinian side, on the Green Line, allowing Israel to retain these blocks and creating a contiguous State of Palestine.

The settlement project has not created the conditions for the annexation of the West Bank to Israel nor made it inevitable. Accepting the “inevitability thesis” rewards settlers and removes the most feasible option from the negotiating table. It also frees supporters of other options from the need to offer a serious feasibility study of their preferred one-state solution.

Despite the formidable challenges to territorial partition, the term “irreversible” serves little purpose. The obstacles to settler evacuation remain political, not geographical or demographic.