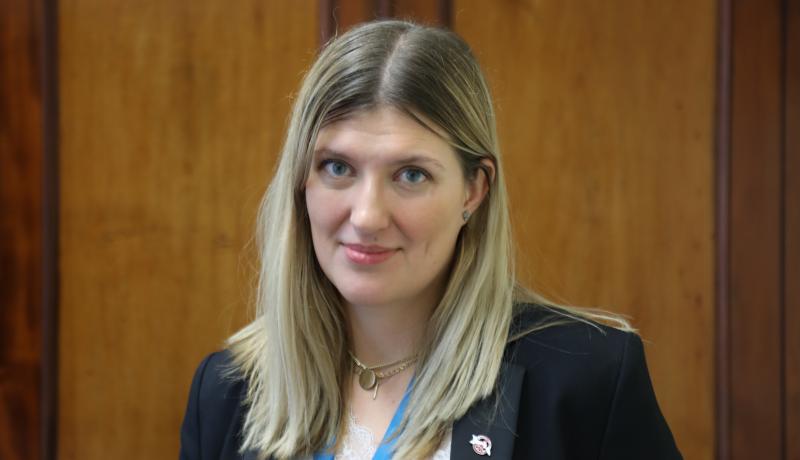 Beatrice Fihn, executive director of the International Campaign to Abolish Nuclear Weapons, speaks with Nina Black about making multilateral action on disarmament more effective, and what she thinks of a Trump–Kim nuclear summit.

The International Campaign to Abolish Nuclear Weapons (ICAN) was awarded the Nobel Peace Prize in December 2017 and was instrumental in creating the Treaty on the Prohibition of Nuclear Weapons in July 2017 – a global agreement by more than 50 non-nuclear states to ban nuclear weapons. But what steps should nuclear states take to reduce the threat of their weapons?

They have a lot of work to do. Obviously they have all committed to the goal of a world without nuclear weapons. The big five [nuclear states] have their legal obligations under Article VI of the NPT [Treaty on the Non-Proliferation of Nuclear Weapons] and there’s been lots of agreed documents and plans – the 2010 Action Plan for example – that have a very clear roadmap. These steps – ratify the CTBT [Comprehensive Nuclear Test Ban Treaty], negotiate the FMCT [Fissile Material Cutoff Treaty], more reductions between the US and Russia – obviously they have to be taken.

But at the same time, what we identify through our work is that we are never going to get to disarmament and we are never going to manage to prevent proliferation unless we really address the underlying problem with nuclear weapons. The fact that some states think it is legitimate to have them, to threaten to use them. Some states can have them and others can’t – it’s okay that we have them but they can’t – which creates this [dynamic of] ‘are they good or are they bad’.

We are never going to eliminate them until we actually say these are bad weapons – they’re not good for us, we should get rid of them. So that’s really what the campaign is about – to delegitimize and stigmatize nuclear weapons.

One argument made by nuclear states is that nuclear weapons are a deterrent for adversaries. What do you make of this approach?

The nuclear armed states – the deterrents work for them, but they shouldn’t work for anyone else. And I think that’s also the problem – if nuclear weapons actually deter war, if they create peace and stability, then why aren’t we welcoming North Korea? Why isn’t everyone allowed to have them? So at the same time they recognize that nuclear weapons are really dangerous – but just not theirs.

Why do you think that multilateralism can be effective? Why hasn’t it been more effective so far? How can it be used to work with North Korea and other ‘nuclear grandstanding’ states?

I think diplomacy in general has proven to be really effective. The recent news about North Korea and the potential summit comes not from threats of fire and fury but through really skilful diplomacy from South Korea. They saw that this was a very dangerous situation and they were squeezed in-between – so I think diplomacy, seen also with Iran, has been very effective.

I think that we have in the international community, especially with nuclear weapons, a habit of not doing anything until everyone agrees. I just don’t think that is possible in a multipolar world. People talk about nuclear disarmament but say it has to happen in a certain way, when everyone is ready. But they aren’t going to be ready at the same time. I think it’s naïve to think that we will have a moment when the nine nuclear states will just find inner peace and there will be white doves flying around and it will all be great and they will just disarm!

It’s not going to happen like that. Countries are going to have to move at different paces and it doesn’t mean that countries should unilaterally disarm, but I think that multilateralism and disarmament negotiations that do not require consensus have been much more successful these last 20 years. We have seen treaties developed despite the resistance of some countries.

We’d rather have progressive, leading countries set the standard high and then drag everyone else screaming and kicking with them in a way, rather than set ourselves at the lowest bar and adjust to North Korea. We set the bar high and work to get everyone there.

What do you think of Donald Trump’s agreement to meet with Kim Jong-Un to discuss ‘denuclearization’? Is this a positive step or a distraction?

It is a positive sign, and as I said earlier, we know that South Korea has worked really hard – not through threats, but really using the Olympics, being very flexible and trying to stroke egos, and manoeuvre around the issue – because this is an issue of survival for them. They rightly recognize that this is not a time where we just play tough and macho and issue threats.

So we welcome it of course, but at the same time what is going to happen is completely unknown – if they are actually prepared to go into these negotiations with the United States, what the North Koreans actually want and what they are prepared to do.

What we know is that you can’t address one country’s nuclear arsenal without addressing the problem of nuclear weapons in general. It’s not a problem of who has them; it is a problem of the weapon. So if nuclear weapons are essential for securing the biggest military power in the world, if they can’t feel safe without them, how is a country like North Korea going to feel safe? And if a country like Britain clings onto these weapons and says we need them or we will get invaded, other countries are going to think the same.

So whatever happens – it might be really successful, or who knows, it might not happen – we don’t know at this early stage. But I don’t think we are going to see a sustainable solution to proliferation unless we address the whole issue of nuclear weapons.