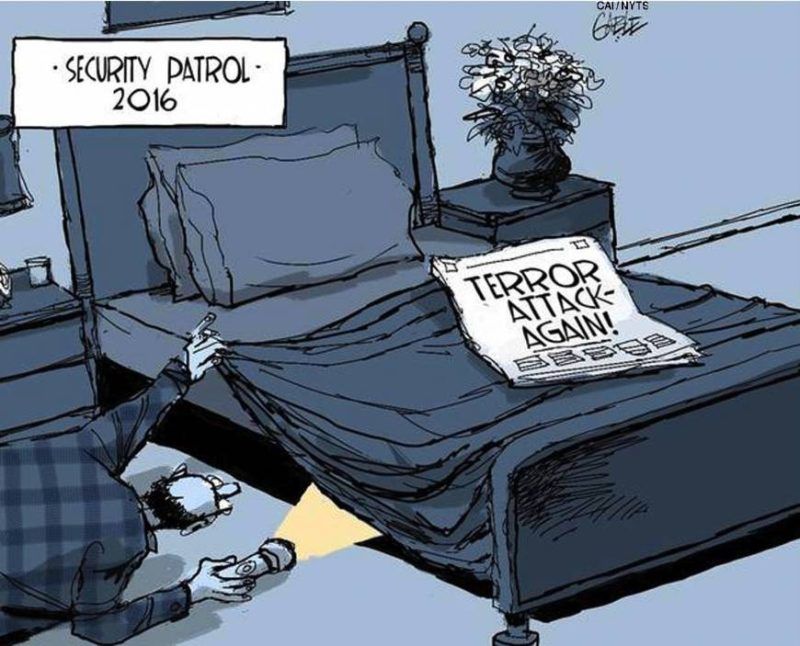 Belgium may be a boring country, but it still seems extreme for a Belgian politician to say that the country is now living through its darkest days since the end of World War II. Can any country really be so lucky that the worst thing that has happened to it in the past 70 years is a couple of bombs that killed 34 people?

That may sound a bit uncharitable, but respect for the innocent people killed by terrorists does not require us to take leave of our senses. What is happening now is the media feeding frenzy that has become almost a statutory requirement after every terrorist attack in the West.

And people do let themelves get wound up by the media-generated panic. Last night at dinner a young man, staying with us overnight in London before taking a morning flight to the United States, openly debated with himself about whether he should cancel his (non-refundable) ticket or not. It was a ticket from London to Chicago that went nowhere near mainland Europe at all.

The airlines are just as prone to panic, canceling flights into Belgium as if the country had suddenly become a seriously dangerous place. This story will dominate the Belgian media for weeks, and the rest of the Western media for the remainder of this week. Even non-Western media will play it for a day or two. Almost nothing new or useful will be said, and then the frenzy will die down — until next time.

This is a very stupid way of behaving, but you will notice that I am a part of it. No matter what I say about the bombs in Brussels, the fact that I am writing at length about them in a column that appears all over the world contributes to the delusion that they are not only a nasty event but also an important one.

It is the sheer volume of coverage that determines an event’s perceived importance, not what is actually said about it. But if we in the media are compelled to write about an event like the Belgian bombs, what can we truthfully say about it that will not feed the panic?

The first thing, after every terrorist attack, is to stress that the media coverage of the attack is its primary purpose — indeed, almost its only purpose. Like the health warning on cigarette packets, it should be part of every story on terrorism.

Second, we have to put the alleged “threat” of such terrorist attacks into perspective. People rarely do this for themselves, because once events are beyond the range of their daily experience most people cannot distinguish between what is truly dangerous and what is only dramatic and frightening.

It really does help to remind people that terrorism is a statistically insignificant risk — that they are in much greater danger of dying from a fall in the bath than of dying in a terrorist attack — even if that approach conflicts with the journalists’ natural urge to emphasise the importance of whatever they are writing about.

And finally, a little dispassionate analysis quickly deflates the notion that terrorism is “an existential threat” (as British Prime Minister David Cameron once said). For example, the recent terrorist attacks in Europe have been largely confined to French-speaking countries.

Muslim immigrants in France and Belgium mostly come from Arab countries, and especially from North Africa, where French is the second laguage. And the Arab world is where radical Islamism is strongest. Germany (whose Muslims are mostly Turkish) and Britain (where they are mostly of South Asian origin) generate fewer Islamist extremists than the Francophone countries, and face fewer terrorist attacks.

France’s and Belgium’s Muslim citizens are also less integrated into the wider community. French housing policy has dumped most of the immigrants in high-rise, low-income developments at the edge of the cities, often beyond the end of the metro lines. Unemployed, poorly educated and culturally isolated, their young men are more easily recruited into extremist groups.

There is no terrorist army in Belgium, just a bunch of young men making it up as they go along. For example, the Brussels attacks happened four days after the arrest of Salah Abdeslam, the sole survivor of the gang who carried out the attacks on the Bataclan arena and the Stade de France in Paris last November.

Back in Brussels after failing to use his suicide vest in the Paris attack, Abdeslam was a psychological wreck, and his Islamist colleagues undoubtedly expected that once in police custody he would sing like a canary. So they decided to launch another attack and go to glory before the police kicked in their doors.

Prime Minister Charles Michel issued the usual ritual incantation about Belgians being “determined to defend our freedom,” but Belgium’s freedom is not at risk. Terrorists are not an existential threat. They are a lethal nuisance, but no more than a nuisance.

Based in London, Gwynne Dyer is an independent journalist and military historian whose syndicated columns are published in 45 countries.