Kenyan voters are at the polls again today for the second time in three months. In September, the country’s Supreme Court annulled President Uhuru Kenyatta’s Aug. 8 election victory over opposition leader Raila Odinga after allegations of fraud. The ruling, the first of its kind in Africa, has been hailed as a victory for the rule of law both in Kenya and across the continent.

But however pathbreaking the court’s ruling may be, the country’s electoral institutions are in crisis. In the weeks since the court’s ruling, Odinga has withdrawn from the race, citing a lack of confidence in the Independent Boundaries and Electoral Commission (IEBC) and calling on his supporters to boycott today’s voting. One of the IEBC’s commissioners, Roselyn Akombe, recently fled to the United States, claiming that the commission had been compromised by partisan forces and saying her life had been threatened. The IEBC’s embattled leader, Wafula Chebukati, admitted last week that he wasn’t sure the commission could guarantee a fair and impartial election.

What do Kenyans make of all this?

Data from an opinion poll we designed suggests that voters on different sides of the nation’s ethno-political divide hold starkly different views. The poll, conducted by TNS RMS over the last week (Oct. 17-24), includes a nationally representative sample of 709 respondents, with a margin of error of 3.7 percentage points. Here are four takeaways that are relevant for today’s election.

1. Kenyans are divided over the ruling but support the Supreme Court 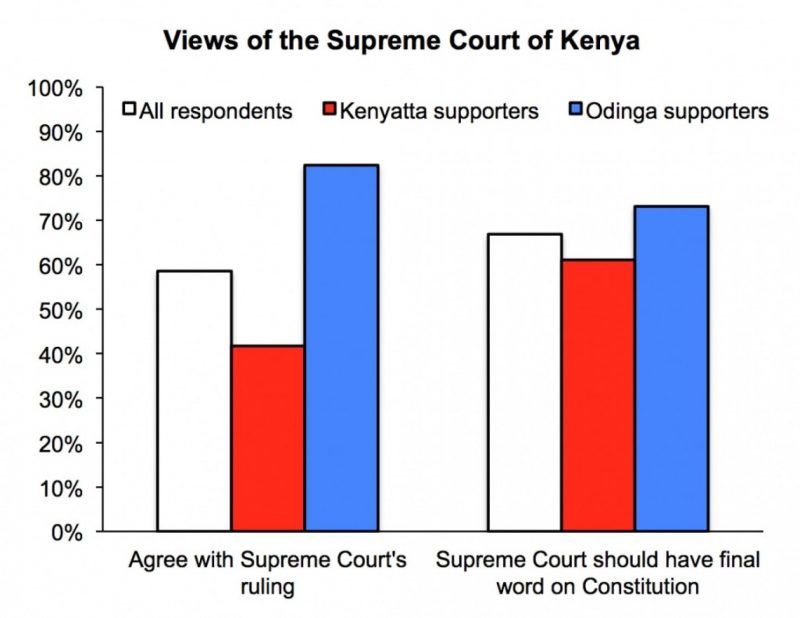 While opinions are divided on the court’s ruling, many Kenyans are supportive of the Supreme Court’s authority in the political system. Fully two-thirds of all respondents agree that the “Supreme Court should have the final word in determining whether government actions or laws violate the Constitution.” Kenyatta supporters believe this by about 61 percent, while Odinga supporters agree by 73 percent — a modest difference of about 12 points. Partisan differences about the court’s authority are far less pronounced than are those about its invalidation of the August election.

About 72 percent of all respondents report the “Supreme Court can be trusted to make decisions that are right for the country as a whole.” While Odinga supporters are substantially more likely to hold this view than Kenyatta supporters (89 percent vs. 59 percent), it is noteworthy that nearly three-fifths of those who voted for Kenyatta express trust despite the court’s invalidation of Kenyatta’s election victory.

2. The IEBC has yet to instill faith in many voters

The IEBC, on the other hand, is widely distrusted. Almost half (46 percent) of all respondents do not trust the IEBC “to administer future presidential elections fairly,” despite important institutional reforms under a new constitution passed in 2010. These reforms were supposed to fix difficulties that had existed with the IEBC’s predecessor, the Electoral Commission of Kenya. That earlier body had hastily certified the results of the highly contested 2007 election — a decision that helped set off widespread ethnic protest and fighting, in which more than 1,000 people were killed and another 350,000 displaced from their homes. 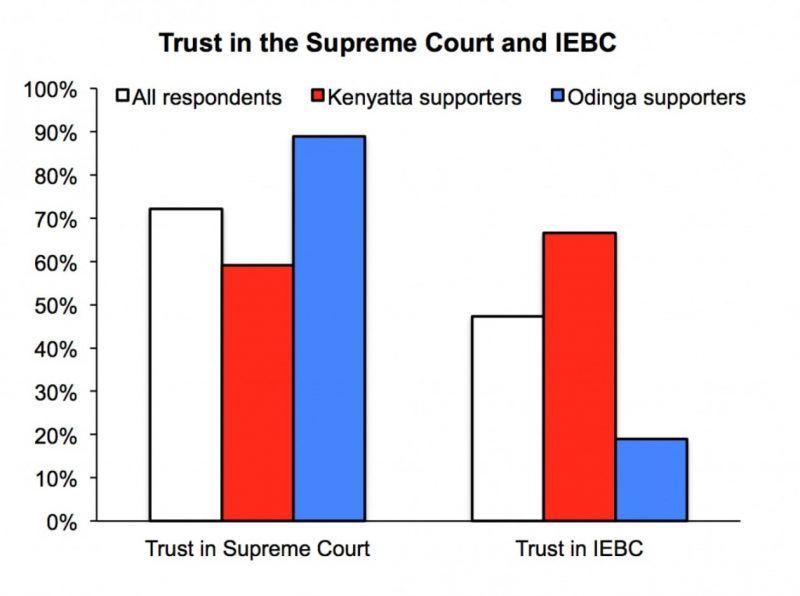 The IEBC hasn’t overcome that distrust. While two-thirds of Kenyatta supporters trust the IEBC, less than 20 percent of Odinga supporters do. That may be unsurprising, considering recent elite rhetoric. Odinga and other opposition leaders have claimed the IEBC is beholden to Kenyatta’s party, a claim made more credible by Akombe’s departure and Chebukati’s recent statements.

As you’d expect, Kenyatta and Odinga supporters have very different opinions of Odinga’s decision to withdraw from today’s election. Only 10 percent of those who voted for Kenyatta support Odinga’s move. The vast majority of them (74 percent) say that Kenyatta was the rightful winner of the Aug. 8 election, and presumably want Odinga in the race so that Kenyatta can be fairly crowned today’s victor.

Eighty percent of Odinga’s supporters, by contrast, agree that he should not participate. The opposition appears unlikely to suffer any drop in support for the decision.

4. Election fatigue may be setting in

Many Kenyans are fed up with the electoral mess; some may be losing faith in some domestic institutions. One striking finding from our survey is that 57 percent support the idea of using methods other than elections to select the country’s leaders, an indicator that is commonly used to gauge support for democracy around the world. On this, Kenyatta’s and Odinga’s supporters agree strongly, with 54 and 64 percent support, respectively.

When this question was asked in Kenya in 2014 by the Afrobarometer, only 15 percent expressed support for non-electoral methods. The sharp increase since then may be due at least in part to the current electoral drama, though differences in the question format may also account for some of the disparity. 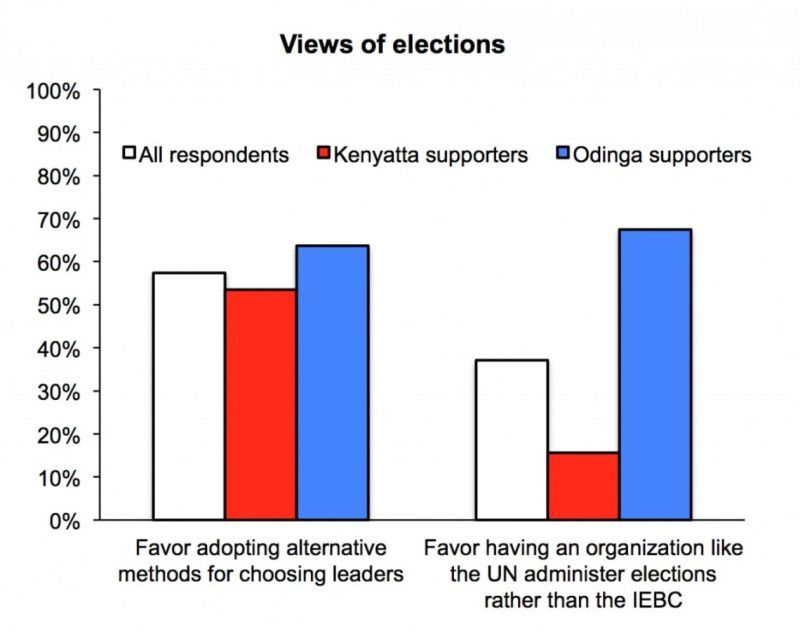 Perhaps more significant, fully 37 percent of respondents — and 67 percent of opposition supporters — would support inviting an international agency like the U.N. to take over election management. While it is unlikely that Kenya’s leaders would ever consent to such a plan, these findings point to a deep crisis of legitimacy in the country’s electoral institutions.