In the past few weeks, violent protests in Latin America have resulted in destroyed property, thousands of arrests and dozens of deaths. Observers, including scholars of the region, are surprised by the recent turmoil in Peru, Ecuador, Bolivia, Colombia and especially in Chile. Nobody saw it coming.

And yet these don’t come out of nowhere. For more than a year, citizens have been turning out for mass protests in Venezuela, Haiti, Nicaragua and Honduras. Not long ago, massive protests in Guatemala (2015) and Brazil (2016) helped push out presidents. And in recent weeks, Panama and Mexico have also had smaller but significant protests.

Are these protests a form of temporary social agitation, or a sign that democracy is in trouble in Latin America? Experts and journalists have debated a variety of explanations for the unrest. But few have discussed this question.

What do the markers of democracy tell us?

Most Latin American countries (except Cuba) became democracies in the late 20th century, after a long history of military dictatorships. Aggregate indicators of democracy give us a sense of how much democracy has advanced in the region. While those indicators are important pointers of democracy, public opinion about democracy is equally important.

Consider, for instance, how much people support democracy as compared with other forms of government. That relates to Winston Churchill’s famous quote that democracy is the worst form of government, except for all the rest. Another concern is how satisfied people are with how democracy is working in their country. 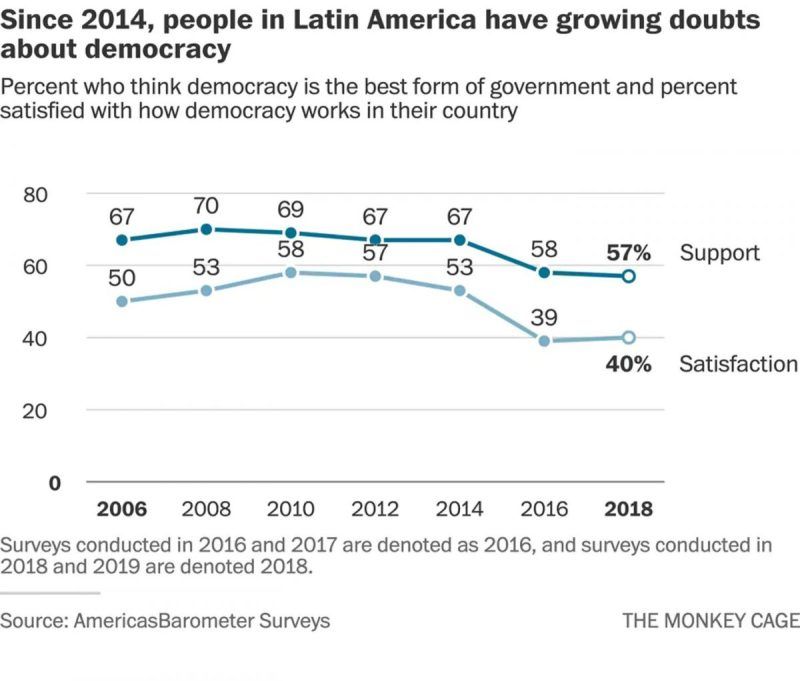 My research, based on survey data from 2019, shows that in the countries that have had the most serious turmoil in recent weeks, citizens display moderate levels of support for democracy — and high levels of dissatisfaction with its performance. Further, in those countries, the public has only meager trust in important democratic institutions, especially political parties.

A recently published AmericasBarometer report shows that, across the entire Latin American region, citizens’ support for and satisfaction with democracy has been declining since 2014; although, as you can see in the figure, support for democracy is a bit higher. By 2019, only 58 percent of Latin Americans thought democracy was the best possible form of government, while only 40 percent were satisfied with how democracy was performing in their country.

Moreover, in every single country, the percentage of citizens who support democracy has declined — regardless of the ideology of the government in power.

Why are Latin Americans souring on democracy?

Public opinion data can also uncover why support for democracy is declining. The AmericasBarometer data finds that those who believe that their country’s economic situation has deteriorated in the past year are less likely to support democracy. So are citizens who have a feeling of personal insecurity because of crime.

What about democratic institutions?

Support for democracy is also lower among citizens who do not believe that “those who govern their country are interested in what people like me think.” This may be one of the keys for understanding how Latin Americans have lost faith in democracy.

What’s more, a relatively low percentage of citizens in Latin America have confidence in three essential democratic institutions in 2018-2019: local government (40 percent), the legislature (30 percent) and political parties (17 percent). That confidence is lower than in previous years. 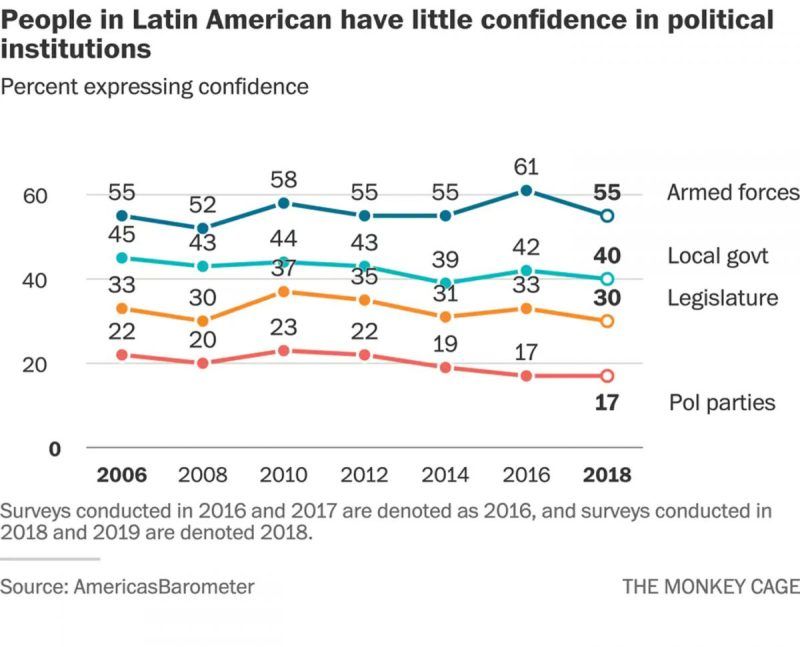 Interestingly, Latin Americans trust the military more than other institutions, with 55 percent trust in 2019. But of course, the military is not an elected body. What’s especially important is that the gap in Latin Americans’ trust in the military and in institutions of representative democracy has been growing. In a region where not long ago, authoritarian military regimes governed with an iron fist, this could spell trouble for democracy. We have already seen that in many countries, the military can still be the final arbiter of political change.

Democracy is in some trouble in Latin America. Public discontent goes beyond any individual incumbent; citizens seem to be unhappy with democracy itself and with its essential institutions. While that discontent may not be dramatic just now, it’s difficult to predict what will happen if trust continues to erode.

Dinorah Azpuru is a professor of political science and international relations at Wichita State University in Kansas.