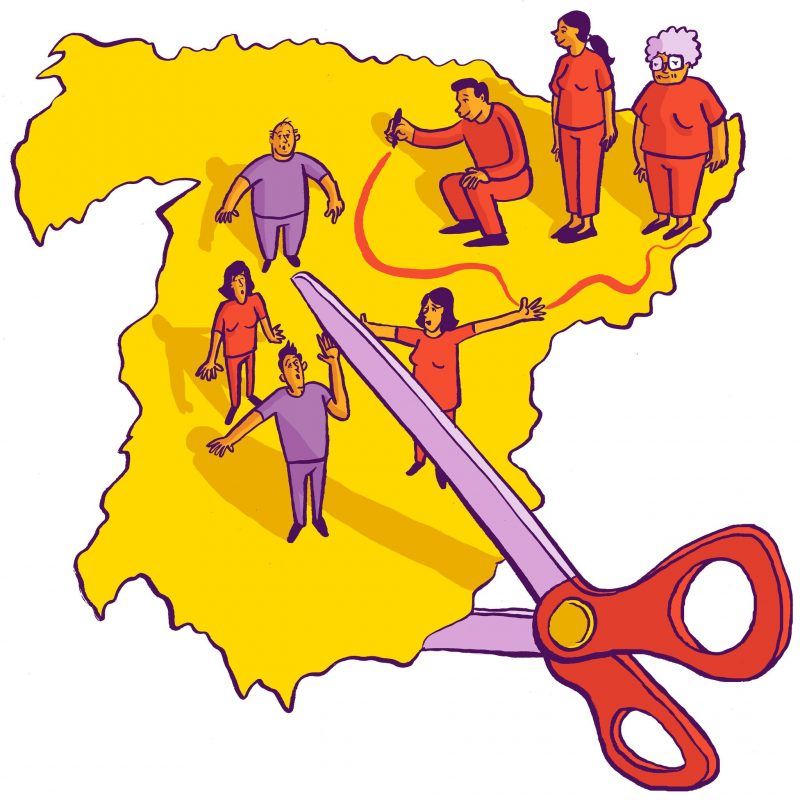 On Jan. 8, 1918, less than a year after the United States entered World War I, President Woodrow Wilson spoke before a joint session of Congress to present a vision of a radically new international system that he believed would prevent the outbreak of another war. Wilson called for an “impartial adjustment of all colonial claims,” respecting the sovereignty of the people living under colonialism, and a redrawing of borders “along clearly recognizable lines of nationality.”

Though the actual postwar settlement fell far short of Wilson’s vision, the idea that national borders should be based on ethnic self-determination had a more wide-ranging impact than he intended. Wilson’s speech caused a sensation from India to Egypt to China and far beyond.

In the coming weeks, two would-be nations will decide whether to pursue self-determination in accordance with Wilsonian principles. On Sept. 25, Iraqi Kurdistan will vote on independence from Iraq. On Oct. 1, Catalonia will vote on independence from Spain. In both cases, the countries potentially being seceded from oppose even asking the question. And in both cases, even if voters choose independence, the would-be countries are likely to face the opposition of the international community, including the United States.

This isn’t surprising. Since Wilson’s time, the United States, a country founded as a breakaway colony, has generally been reluctant to see changes to the world map. During the Cold War, this tendency resulted in formal American neutrality during the wars of independence in Biafra from 1967 to 1970 and in Bangladesh in 1971. Despite public outrage over the suffering of civilians and public pressure to support the rebels, Washington refused to abandon two Cold War allies, Nigeria and Pakistan.

In 1991, President George H. W. Bush opposed the breakup of the Soviet Union, warning Ukrainians in what became known as the “Chicken Kiev” speech that “freedom is not the same as independence” and “Americans will not support those who seek independence in order to replace a far-off tyranny with a local despotism.” That same year, after Croatia held an independence referendum, the State Department made clear that the United States was committed to the “territorial integrity of Yugoslavia within its present borders” — a stance that did little to prevent the country’s bloody disintegration.

During the first war in Chechnya in 1996, President Bill Clinton dubiously compared President Boris Yeltsin of Russia with Abraham Lincoln, who he said gave his life for the proposition “that no state had a right to withdraw from our union.” Before Scotland’s referendum on independence in 2014, President Barack Obama urged Scottish voters preserve a “strong, robust and united” Britain. The Trump administration, despite flirting with the idea of dropping the longstanding “one China” policy recognizing Beijing’s sovereignty over Taiwan, seems to have settled into a similar embrace of the cartographical status quo.

There have been deviations, notably America’s support for the independence of Kosovo and South Sudan, but these have come to be seen as cautionary tales. Russia used Kosovo as a precedent in recognizing breakaway regions of Georgia, and accused the United States of hypocrisy for not following suit. South Sudan, which has collapsed into civil war and ethnic cleansing, hasn’t exactly bolstered the arguments of independence movements elsewhere.

America’s aversion to border changes conforms with the policies of the world’s major multilateral institutions. Starting in the 1960s, the United Nations backed the independence of former European colonies, but once they were independent, opposed “any attempt aimed at the partial or total disruption of the national unity and the territorial integrity of a country.” This principle was adopted even though many of the new countries had borders drawn by the colonists. Even the African Union, an organization founded on the rejection of colonialism, is dedicated to preservation of one of colonialism’s principal legacies, including language in its charter affirming its members’ “respect of borders existing on achievement of independence.”

At the United Nations’ founding, it had 51 member states. Today there are 193. But the creation of new countries has slowed. In the 21st century, only three new countries have joined the U.N.: East Timor, Montenegro and South Sudan. (Switzerland finally joined in 2002, but it’s hardly a new country.) A few other places, including Kosovo, Abkhazia, South Ossetia and Somaliland, are de facto autonomous but are not universally recognized.

There are several reasons for this slowdown. For one thing, after decades of decolonization and ethnic sorting, there are simply fewer separatist movements clamoring for their own countries. But one major reason is that the world’s great powers, including the United States, don’t really want to see the map changed.

This emphasis on sovereignty has, of course, often been motivated by power politics and self-interest. But there are also some good reasons to be concerned about normalizing secessionism: Peaceful separations of countries are exceedingly rare. More commonly they are catastrophic, as in the slaughter and mass displacement that accompanied the partitions of India and Yugoslavia.

The problem is, as it was in Wilson’s day, that people don’t live in neatly ordered clusters. However national boundaries are drawn, some are likely to find themselves on the wrong side of them — and genocide is as likely an outcome as peaceful coexistence.

Still, few would argue that the current map of the world is perfect. And recent events suggest it may be hard to preserve indefinitely.

In 2014, when Russia annexed Crimea, President Vladimir Putin justified the absorption of a largely Russian-speaking region with near-Wilsonian language of self-determination. The United States and Europe responded to what Secretary of State John Kerry called “19th century” behavior with condemnations and sanctions, but they could do little to stop or reverse it. That same year, the Islamic State claimed it was bringing about the end of the Sykes-Picot borders drawn in the Middle East after World War I. China, meanwhile, has been bolstering its territorial claims in the South China Sea with the construction of more than 3,200 acres of new land in the form of artificial islands. More changes to the map loom: By the end of the century, rising sea levels could render some small island states uninhabitable, raising the question of whether a country can continue to exist as a political entity if the piece of land it is associated with no longer does.

Our current period of cartographical stasis might turn out to be a brief anomaly. Rather than seeking to preserve the current map at all costs, American efforts might be better spent trying to ensure that these changes happen peacefully. One idea would be to push international institutions to allow more than a one-size-fits-all definition of statehood, allowing some form of international representation for places that are largely autonomous but not fully states.

Another would be to reconsider America’s reflexive opposition to new bids for statehood. It might be helpful if there were more precedents for peaceful, orderly, democratic separations, rather than violent, chaotic ones. I’m not arguing in favor of independence for Kurdistan, Catalonia, Scotland or anyplace else. When the shapes of new countries have been drawn by people who don’t live in them, it hasn’t usually worked out very well. There are very real reasons for skepticism about all of these independence movements. But that doesn’t mean that maintaining the world’s current arrangement of countries within their existing borders needs to be a guiding principle.

Above all, the preservation of existing countries ought to guide our thinking less than the well-being of the people who live within them.

Joshua Keating, a staff writer for Slate, is the author of the forthcoming Invisible Countries, from wich this essay is adapted.