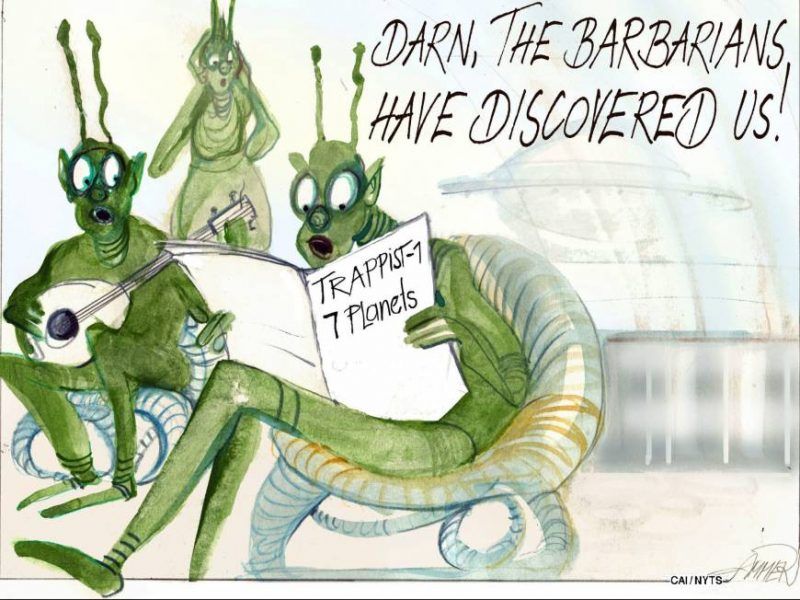 Only 39 light-years away, astronomers have found seven planets circling a very small “red dwarf” star called Trappist-1. All seven are in or near what we call the “Goldilocks zone”: not too hot, not too cold, but just right for water to remain liquid on the planet. So we all speculate once again, but a little more bravely this time, about whether some of these planets might be home to life.

Not only are three of Trappist-1’s planets dead center in the Goldilocks zone; the other four are on the fringes of the habitable zone. And they are all big enough — from half Earth’s size to slightly bigger than our home planet — to retain an atmosphere for billions of years.

If an intelligent life form evolved on even one of these planets, it could have colonized all seven: they are very close together. The journey would be not much more demanding than a trip from the Earth to the moon.

So think about that: a seven-world interplanetary civilization. It may not exist at Trappist-1: We cannot yet assume that life crops up everywhere that the circumstances are suitable for it. But it surely must exist in one or many (or most) of the hundreds of millions of similar star systems that exist in this galaxy alone.

It looks like life is as common as dirt in the universe, which for living creatures like us is infinitely more interesting than a dead universe ruled only by physics and chemistry. Whereas the poor scientists, shackled by their duty to go not 1 millimeter further than the evidence will currently support, are condemned to say cool, restrained things like:

“The discovery of multiple rocky planets with surface temperatures that allow for liquid water make this amazing system an exciting future target in the search for life.” (Dr. Chris Copperwheat of Liverpool John Moores University, which provided one of the telescopes used in the study.)

Of course, Copperwheat really knows that this discovery makes it 99 percent certain (it was already 98 percent certain) that life is commonplace throughout the universe. He just must not say so until we actually find hard evidence for life on one of the almost 4,000 “exoplanets” orbiting other stars that astronomers have found in the past 24 years.

But I am a journalist, and I am allowed to speak obvious truths even when the scientific evidence is still falling a bit short. Planets are self-evidently as common as dirt. Life is almost certainly as common as dirt. And even intelligent life must be pretty common in the universe.

I started reading science fiction when I was quite young — maybe 10 or 11 — and my parents knew an old guy a few streets away who was an amateur astronomer, so they sent me along to see him. He showed me his telescope, and pictures he had taken, and even an exercise book where he had done sketches of our own solar system and the entire galaxy with colored pencils.

But he couldn’t tell me whether there were any planets beyond our own system, let alone whether there was life elsewhere in the universe. Nobody knew, and he was being properly scientific in his caution. So I returned to my science fiction, and never went back to see him again.

I am probably now at least as old as that “old guy” was then. We live in a truly marvelous time, when the whole universe is opening up to us, and I wish he could have lived long enough to know what we know now.

And now for the next perplexing question. If life is as common as dirt, and intelligent life only maybe a thousand times less common, then where is everybody? Is intelligence so counterproductive that an intelligent species automatically self-destructs within a few dozen generations of developing a scientific civilization? Or is there something so terrible out there that everybody who survived is observing radio silence?

Questions for another day. But Trappist-1 is so close that in a few hundred years we could probably get there in a generation ship. Meanwhile, a private consortium led by the BoldlyGo Institute and Mission Centaur is working on an orbital telescope that will look for planets around our closest stellar neighbor, Alpha Centauri, only 4.4 light-years (40 trillion km) away.

It’s called Project Blue, after astronomer Carl Sagan’s famous picture of our own “pale blue dot.” But there are a gazillion other pale blue dots, and maybe Alpha Centauri has one too. Hallelujah!

Gwynne Dyer is an independent journalist whose articles are published in 45 countries.