We call it light; “electricity” is too sterile a word, and “power” too stiff, for this Nigerian phenomenon that can buoy spirits and smother dreams. Whenever I have been away from home for a while, my first question upon returning is always: “How has light been?” The response, from my gateman, comes in mournful degrees of a head shake.

The quality is as poor as the supply: Light bulbs dim like tired, resentful candles. Robust fans slow to a sluggish limp. Air-conditioners bleat and groan and make sounds they were not made to make, their halfhearted cooling leaving the air clammy. In this assault of low voltage, the compressor of an air-conditioner suffers — the compressor is its heart, and it is an expensive heart to replace. Once, my guest room air-conditioner caught fire. The room still bears the scars, the narrow lines between floor tiles smoke-stained black. 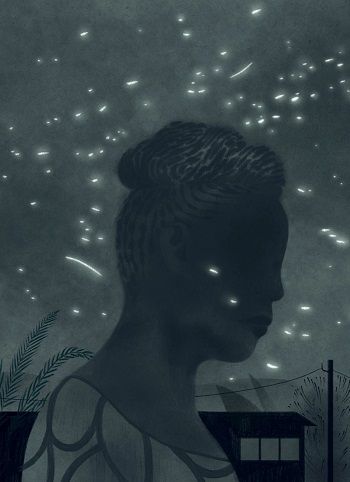 Sometimes the light goes off and on and off and on, and bulbs suddenly brighten as if jerked awake, before dimming again. Things spark and snap. A curl of smoke rises from the water heater. I feel myself at the mercy of febrile malignant powers, and I rush to pull my laptop plug out of the wall. Later, electricians are summoned and they diagnose the problem with the ease of a long acquaintance. The current is too high or too low, never quite right. A wire has melted. Another compressor will need to be replaced.

For succor, I turn to my generator, that large Buddha in a concrete shed near the front gate. It comes awake with a muted confident hum, and the difference in effect is so obvious it briefly startles: Light bulbs become brilliant and air-conditioners crisply cool.

The generator is electricity as electricity should be. It is also the repository of a peculiar psychology of Nigerian light: the lifting of mood. The generator is lord of my compound. Every month, two men filled with mysterious knowledge come to minister to it with potions and filters. Once, it stopped working and I panicked. The two men blamed dirty diesel, the sludgy, slow, expensive liquid wreathed in conspiracy theories. (We don’t have regular electricity, some say, because of the political influence of diesel importers.) Now, before my gateman feeds the diesel into the generator, he strains it through a cloth and cleans out bits of dirt. The generator swallows liters and liters of diesel. Each time I count out cash to buy yet another jerrycan full, my throat tightens.

I spend more on diesel than on food.

My particular misfortune is working from home. I do not have a corporate office to escape to, where the electricity is magically paid for. My ideal of open windows and fresh, breathable air is impossible in Lagos’s seething heat. (Leaving Lagos is not an option. I love living here, where Nigeria’s energy and initiative are concentrated, where Nigerians bring their biggest dreams.) To try to cut costs — sustainably, I imagine — I buy an inverter. Its silvery, boxlike batteries make a corner of the kitchen look like a physics lab.

The inverter’s batteries charge while there is light, storing energy that can be used later, but therein lies the problem: The device requires electricity to be able to give electricity. And it is fragile, helpless in the face of the water pump and microwave. Finally, I buy a second generator, a small, noisy machine, inelegant and scrappy. It uses petrol, which is cheaper than diesel, and can power lights and fans and freezers but only one air-conditioner, and so I move my writing desk from my study to my bedroom, to consolidate cool air.

Day after day, I awkwardly navigate between my sources of light, the big generator for family gatherings, the inverter for cooler nights, the small generator for daytime work.

Like other privileged Nigerians who can afford to, I have become a reluctant libertarian, providing my own electricity, participating in a precarious frontier spirit. But millions of Nigerians do not have this choice. They depend on the malnourished supply from their electricity companies.

In 2005, a law was passed to begin privatizing the generation and distribution of electricity, and ostensibly to revamp the old system rooted in bureaucratic rot. Ten years on, little has changed. Most of the companies that produce electricity from gas and hydro sources, and all of the distribution companies that serve customers, are now privately owned. But the link between them — the transmission company — is still owned by the federal government.

I cannot help but wonder how many medical catastrophes have occurred in public hospitals because of “no light,” how much agricultural produce has gone to waste, how many students forced to study in stuffy, hot air have failed exams, how many small businesses have foundered. What greatness have we lost, what brilliance stillborn? I wonder, too, how differently our national character might have been shaped, had we been a nation with children who took light for granted, instead of a nation whose toddlers learn to squeal with pleasure at the infrequent lighting of a bulb.

As we prepare for elections next month, amid severe security concerns, this remains an essential and poignant need: a government that will create the environment for steady and stable electricity, and the simple luxury of a monthly bill.

Chimamanda Ngozi Adichie is the author, most recently, of the novel Americanah.