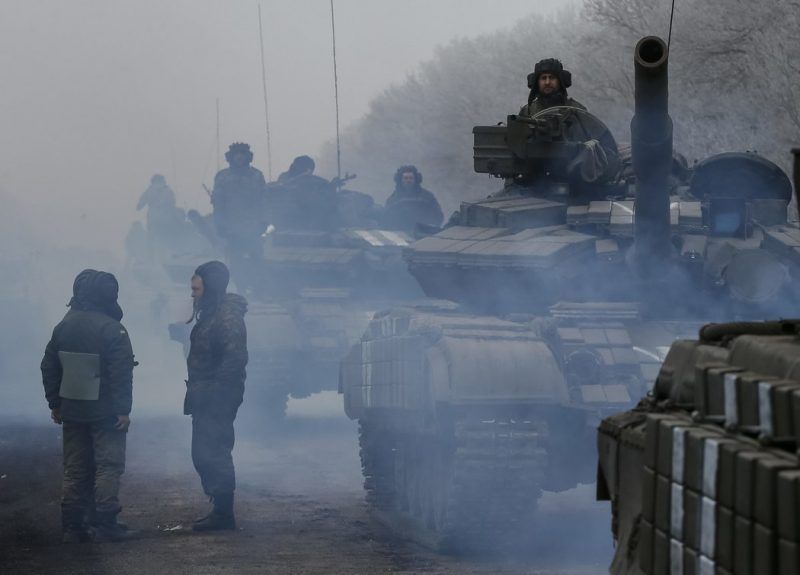 With a major battle around the rail hub of Debaltseve ending with the withdrawal of Ukrainian government forces, it looks like the tenuous truce in eastern Ukraine may hold. After violence that has left more than 5,600 dead and displaced about 1.6 million people, world leaders hope the cease-fire can be sustained and Ukraine can start to rebuild — even though the Minsk agreement, concluded last week after talks between Russia, Ukraine, France and Germany, is regarded skeptically by many, including some of its European Union architects.

Ukraine’s leaders, however, point to one crucial gain: The Minsk agreement treats the Donbass, the eastern region that includes the Donetsk and Luhansk areas declared “people’s republics” by separatist rebels, as an integral part of Ukraine. Officials note that the declaration recognizing their country’s territorial integrity even appears on the Kremlin’s website. Moreover, they say, the agreement makes no reference to the Donetsk and Luhansk republics and speaks of the rebel regions as subjects of Ukrainian law.

The Ukrainian leaders’ guarded optimism may, however, be misplaced. This is not mainly because Russia’s president, Vladimir V. Putin, has shown himself, time and again, to be a deceitful interlocutor, nor because he already has routinely violated Russia’s treaty obligations to respect Ukraine’s territorial integrity.

In this instance, Mr. Putin may be earnest. Russia has been hit hard by Western sanctions, and the growing sentiment for arming Ukraine within the American leadership has raised the prospect of an even higher price for direct intervention. Moreover, unlike other Russia-engineered breakaway statelets like South Ossetia and Abkhazia, in Georgia, and Transnistria, in Moldova, the Donbass has suffered severe protracted war, a ruined infrastructure, economic devastation and social dislocation, making Russia’s support for the enclave costly.

Russia has strong reasons to declare a formal respect for the territorial integrity of Ukraine minus Crimea, because as a participant in Ukraine’s political institutions, a largely autonomous Donbass may impede the country’s integration into the West.

In a Jan. 27 article in the newspaper Izvestia, Sergei A. Markov, the director of Moscow’s Institute of Political Studies and a reliable guide to the Kremlin’s thinking, called for “a new politics in Ukraine.” Russia, he wrote, “should not be pressing for the autonomy of the Donbass, but for full democracy for all of Ukraine,” in which “state authority in Ukraine should be returned to the entire Ukrainian people.” He laid out a strategy that challenges the legitimacy of Ukraine’s leadership and demands new parliamentary and presidential elections.

A closer look at the Minsk agreement suggests that it contains mechanisms helpful for Russia to resume its pursuit of the bigger quarry: Ukraine itself. First, the accord places immense economic burdens on Ukraine, which is to resume pension payments to the inhabitants of the Russia-backed region. Kiev also takes on the burden of rebuilding the war-ravaged region.

Second, the agreement establishes the right of the Donbass breakaway areas to establish their own people’s militias. Third, the agreement speaks of the withdrawal of foreign fighters, illegal formations and their weapons, but what would prevent these munitions from emerging in the hands of the new militias?

Currently, the separatist eastern enclaves — with a post-conflict population of about three million — are like a modern-day Sparta, armed with prodigious amounts of artillery and more than 500 Russian tanks, many of them far superior to those of Ukraine. That number is greater than the tank arsenals of Germany, Britain or France — and may grow before the Russia-Ukraine border is sealed at the end of 2015, which is the target under the agreement.

Fourth, the agreement creates a powerful fifth column inside Ukraine as the Donbass will have the right to be represented in Ukraine’s legislature. Already, rebel leaders are demanding that Ukraine’s parliament return to the country’s non-bloc status, which is code for renouncing NATO membership aspirations. Pro-Russia voices will be given a platform in the Ukrainian legislature, the Verkhovna Rada, and will participate in the national debate.

This will enable the Kremlin to use the Donbass to resurrect Russian “soft power” in the context of Ukraine’s post-conflict economic crisis. And if deadly clashes, an impasse over constitutional changes or misread intentions undermine the Minsk deal, Mr. Putin seems to believe that adversity and mounting casualties will eventually lead to a collapse of support for Ukraine’s current leaders. He is poised to take political advantage of any reshuffling of the deck.

In short, Mr. Putin’s Minsk gambit is to create a frozen conflict, but unlike those in Georgia or Moldova. Instead of backing proxy statelets, the strategy is to embed the conflict and his fifth column within the Ukrainian state, allowing him to pursue his aims while seeking to lift the costly Western sanctions.

Unappetizing as it may be, this possible return to soft-power struggle, coordinated with the Donbass leaders he helped install, is still a vast improvement over deadly conflict. The West and Ukraine’s leaders should embrace Mr. Putin’s challenge and respond appropriately.

That means maintaining tough economic sanctions while pressing for the withdrawal of the massive Russian military arsenal in eastern Ukraine. If, as the Minsk agreement may allow, a powerful Russian-sponsored military force in eastern Ukraine will soon be granted legitimacy under Ukrainian law, then removing the bulk of weapons will prove difficult. In this case, the West must quietly rebuild and modernize Ukraine’s military capability. This will involve providing direct lethal defensive military aid and training, if necessary by clandestine means. The West must also insist on Ukraine’s right to modernize its military.

The United States and Europe should assist Ukraine’s economic recovery with aid that encourages reform. And the West should organize a donors’ conference to restore the Donbass — and press Russia to bear some of the costs.

It is also up to the European Union and the United States to ensure that any constitutional changes mandated by the Minsk agreement do not block Ukraine’s possible integration into the European Union. At the same time, Ukraine could grant the Donbass decentralized authority that would permit it to enjoy free-trade status with Russia’s Eurasian Economic Union.

This new Minsk agreement is deeply flawed. It may well break down into a new spiral of deadly warfare, but it is all we have to avert further death and destruction. The West has no choice but to respond intelligently and assertively to Mr. Putin’s new strategy.

Adrian Karatnycky is a senior fellow, and co-director of the Ukraine in Europe program, at the Atlantic Council.