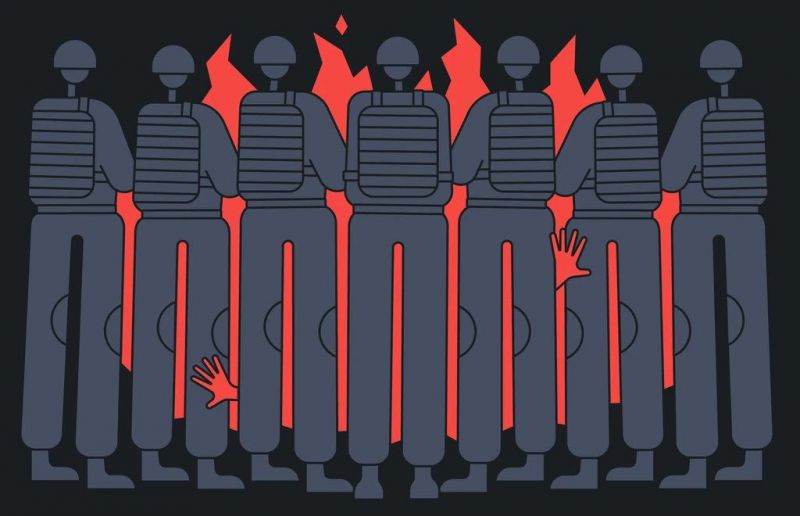 Student protesters in rural Mexico have long dealt with heavy-handed police officers. But on the black night of Sept. 26, students who attended a rural teachers’ college realized they were facing a far worse menace in this southern city. Not only were police officers shooting haphazardly at them, killing three students and several passers-by; shady gunmen were also firing from the sidelines.

The next morning, the corpse of a student was dumped on a major street. He’d had his skin peeled off and his eyes gouged out. It was the mark of drug cartel assassins.

Soldiers and federal detectives detained two alleged cartel hit men, who confessed they had conspired with the police to murder students. They led troops to pits on the outskirts of Iguala containing 28 charred corpses. Forensic teams are working to identify the bodies. A total of 43 students went missing that night, many last seen being bundled into police cars.

When I went to the grave site on an eerie hill, it still stank of decaying human flesh. I had just been interviewing some of the students’ classmates at their university, mostly teenage sons of poor farmers, who are idealistic, committed and frightened. I have covered cartel violence in Mexico for over a decade. But as I inhaled the stench of death on that hill, and saw photos of the mutilated student on the road, I felt as never before that I was covering an act of pure unadulterated evil.

Why drug cartels want to slaughter students may at first seem inexplicable. But it is a symptom of a systematic process that has been taking place in Mexico for years. Drug cartels are taking over chunks of government apparatus, from local police forces to city and state governments. Sometimes, they control the officials; other times, cartel members themselves are the officials. I call it state capture. A student I talked to had a more visceral term for it: narco-politica, or narco-politics.

It’s a terrifying concept. Being ruled by corrupt and self-interested politicians can be bad. But imagine being ruled by sociopathic gangsters. They respond to rowdy students in the only way they understand: with extreme violence designed to cause terror. They stick the mutilated body of a student on public display in the same way they do rival traffickers.

The market city lies amid hills of marijuana and opium fields and is the fief of a brutal cell of traffickers who call themselves Guerreros Unidos, or Warriors United. After the discovery of the massacre of the students, federal soldiers took control of the city. Twenty-two police officers were detained for working with the cartel. In a brazen move, the Warriors put up banners calling for the release of the officers.

The Iguala police chief is now on the run with an arrest warrant behind him. The Iguala mayor has also fled town as the state moves to impeach him. An intelligence agency report linked him to the Warriors, the Mexican media revealed. His wife has also come into the spotlight. One of her brothers served prison time for trafficking and two others were killed in a gangland shooting, according to the intelligence report. Who knows how high this trail of corruption may lead?

The Iguala mayor was a member of the opposition Democratic Revolution Party. But the international attention to this atrocity is also an embarrassment for President Enrique Peña Nieto. Since taking power in 2012, he has been laboring to change Mexico’s violent image, focusing on reforms such as opening up the nation’s energy sector to foreign companies. He has also taken down major drug traffickers, such as Joaquín Guzmán Loera, known as El Chapo, and Nazario Moreno González, also known as El Más Loco. Some observers say Mr. Peña Nieto’s reforms have made this “Mexico’s moment.” But can it really be Mexico’s moment with such barbaric crimes against young people taking place? The president may be reforming Mexico’s laws, but this case highlights the deep problems in the institutions needed to uphold those laws.

The students in Iguala had themselves protested against Mr. Peña Nieto’s reforms, as they are opposed to an education law that will evaluate teachers. Most come from poor indigenous communities where many don’t even speak Spanish, and they object to being tested, and someday possibly being fired, for not knowing enough English.

The rural teachers’ university the students attend is a longtime center of radicalism, covered in pictures of Che Guevara and Lenin. Their protests can be noisy and anger residents as they blockade roads, holding up traffic, and vandalize buildings. To travel to their marches, they often commandeer commercial buses. They normally return them and the practice is largely tolerated, but the bus companies complain about the disruption of their operations.

About 120 of these students had come to Iguala from their nearby university on Sept. 26 and took three buses from the city station. They were driving the buses out of town when the police officers and cartel gunmen opened fire on them. Some students say they threw stones back, but none of them were armed when the killing spree began.

The events that led to such a violent response are still blurry. There are reports that city officials were particularly angry about students disturbing a public event. The large group of boisterous students could be seen by cartel operatives as invading their turf. But whatever the exact mechanics, the frightening specter is of a city controlled by gangsters responding to public disorder with mass murder.

The students wanted the buses to travel to an annual demonstration on Oct. 2 in Mexico City. That day commemorates the massacre by soldiers of dozens — or possibly hundreds — of students in the capital’s square of Tlatelolco in the lead-up to the 1968 Olympics. The students in Iguala never made it to mourn the dead of half a century ago. Now Sept. 26 marks a new date of atrocities on Mexico’s calendar.

Ioan Grillo, a senior correspondent for GlobalPost, is the author of El Narco: Inside Mexico’s Criminal Insurgency.