During my many years as a correspondent in Mexico, some of my best reporting happened around dinner tables. So on a recent trip back, I dined with a range of old contacts to catch up on how Mexico was handling its most pressing challenges, like the 2014 student massacre in southern Mexico, which shocked the world and ignited protests across the country.

But all anyone wanted to talk about was Donald Trump.

My dinner companions were not alone in their fixation. About a week later, the Mexican government announced that it was shaking up its diplomatic corps to address the anti-Mexico rhetoric spewing from the Trump campaign, which a Mexican official told The Washington Post threatened to “damage the image of Mexico in the United States.”

On Sunday, however, Mexico showed that the deeper damage to the country’s image is self-inflicted. 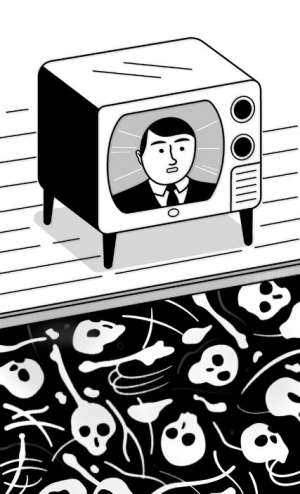 An independent investigative panel released its final report on the massacre in the state of Guerrero, which left 43 students of a rural teachers college in Ayotzinapa missing and presumed dead. Its findings were devastating.

The Interdisciplinary Group of Independent Experts, whose work has led to high-profile prosecutions against the Colombian military, a Guatemalan dictator and American oil companies, not only provided the most chilling account of what the students had suffered one night in September 2014, but it also showed that the Mexican government had, at the very least, badly mishandled the investigation, and quite possibly attempted a cover-up.

As reported by The New York Times, the panel described a night of “confusion and terror,” with police officers using an official communications system to monitor a caravan of buses loaded with undergraduates. A bus driver recalled police officers pointing a gun at the students, saying, “We’re going to kill all of you.”

One of the group’s theories was that the students had unknowingly boarded a bus loaded with drug traffickers’ heroin. To help the traffickers get their drugs back, the authorities set up roadblocks to intercept the buses, then shot at them.

Panel members expressed deep frustration that they were unable to get to the bottom of this hypothesis or others because of stonewalling and foot-dragging by Mexican authorities. They also accused the government of being suspiciously silent during a vicious media campaign seeking to discredit their work.

Government officials appear to be more concerned with Mr. Trump’s sweeping statements about their country and its people — among them, referring to Mexicans as “rapists.” These are, of course, unfounded and offensive. But how can Mexico’s image really improve when its leaders fail to demonstrate some level of commitment to ending the abuses and impunity that matter most to its own people?

After the report was released, condemnations poured forth. “If this is how Mexico investigates high-profile cases, imagine what happens when no one is looking,” wrote Eric Witte, a former adviser to the president of the International Criminal Court. Erika Guevara-Rosas, the Americas director for Amnesty International, told The Associated Press, “There seems to be no limit to the Mexican government’s utter determination to sweep the Ayotzinapa tragedy under the carpet.”

Mexico scholars, lawyers and others I spoke to in recent days marveled at how much had changed for the worse from just two years ago, when President Enrique Peña Nieto was hailed on the cover of Time as his country’s savior.

Portraying himself as a new kind of Mexican politician, Mr. Peña Nieto focused on sweeping economic reforms and played down the security issues — like the tens of thousands of people who have been killed or are missing as part of the country’s fight against drug traffickers — that had defined his predecessor’s agenda. He responded to the broad outcry over the student massacre by agreeing to invite the independent panel of experts to review the case, an unprecedented move in Mexico. But once it became clear that the panel would not serve as a rubber stamp, a carefully calibrated smear campaign began, and the panel’s request for more time to finish its work was denied.

What came across in conversations with Mexicans I spoke to — and these are mostly people who live in cities, not rural communities — is a cynicism toward the idea that things can get better, and an exhaustion with stories about abuses and corruption. Mr. Trump’s campaign, on the other hand, may be less relevant, but it pushes Mexico’s nationalistic buttons. Mexicans are taught from grade school to be leery of Uncle Sam. It’s easy to take Mr. Trump’s rhetoric as a personal attack, and demand that the government do something about it.

Mr. Trump is partly used by the government as a distraction. It’s simpler to focus on foreign demons, rather than on internal ones, particularly when the foreigner spouts the racist attitudes they suspect many Americans share. “It’s always been easier for the Mexican government to unify people around concerns about outside intervention than around the hard work that needs to be done to reform the country,” said Andrew Selee, a scholar at the Woodrow Wilson Center.

That dynamic plays out most vividly in the media, which relies on hundreds of millions of dollars in government advertising. The day after the panel issued its report, one of Mexico’s leading dailies, El Universal, published a story about it on the bottom of its front page. Splashed across the top was an interview with Mexico’s new ambassador to Washington describing his plans to respond to Mr. Trump. The headline read, “Mexico Is Not Going to Be a Punching Bag.”

Ginger Thompson is a senior reporter at ProPublica and a former Mexico City bureau chief for The New York Times.
This story was co-published with ProPublica.