Failure — that’s what Prime Minister Narendra Modi’s stunning decision to ban the most common currency bills last month looks like in this small town in the eastern state of Jharkhand.

The first week the policy was announced we all rushed to withdraw other bills or trade in our newly bad notes for good ones. Again and again, by the time I’d reach a cash machine, often after waiting in line for four or five hours, it would have temporarily run out of cash or the network would be down. Finally, I managed to exchange notes worth 4,000 rupees (about $59) — enough to buy 100 kilos of rice — at the post office for a bag of two-rupee coins. Two thousand coins, nearly 11 kilos. More than a month later, only two of the 17 cash machines in Pakur dispense any money, and my stash of coins fills just half a teacup.

This district, also named Pakur, counts mostly Muslims and Santhals, an indigenous people, and is famous for its stone, coal and strategic location near the border with Bangladesh. But thanks to government apathy and the blatant exploitation of natural resources, it seems to have fallen by the wayside of progress. The only business that accepts payments by debit or credit card or the e-wallet service Paytm in the town of Pakur is its best hotel, which is patronized by businesspeople dealing in stone and other moneyed clients.

At first, many people around me tolerated the scarcity created by demonetization. This was partly because Mr. Modi packaged it in the rhetoric of nationalism. As he announced the policy, the prime minister reminded Indians that in the history of every nation come times when “every person feels he, too, should be part of that moment” and “make his contribution to the country’s progress.” This, Mr. Modi also said, was much like performing the Hindu purification ritual “mahayagya.” 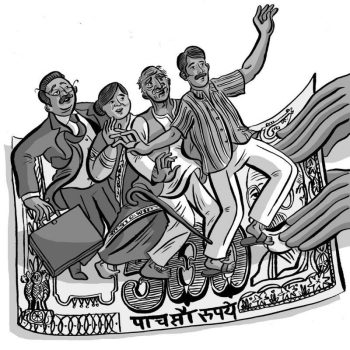 The government seemed to leverage this patriotism with tech savvy. There was a smartphone app that supposedly could determine whether the new 2,000-rupee bills were genuine or counterfeit: You’d scan them with your phone camera, and if the bill was real a speech by Mr. Modi would start playing. Rumor had it that the new notes were also embedded with GPS chips, so the bills could be tracked if they were misused or hoarded.

For a time, admirers of Mr. Modi were gloating about his technological prowess: Only he could have thought of this, they’d say. They are quiet now. It seems the app always played the speech after the bills were scanned, and that it was a prank anyway.

Jingoistic videos are still being shared on WhatsApp – like the one with two actors in Indian Army fatigues who claim that the exchange of fire across India’s border with Pakistan has ceased since demonetization. But the furious cacophony of nationalism has mellowed. Uncertainty and anxiety now hang over many conversations.

A month ago, the tea seller I go to every day for my morning cup was awed by the GPS chip and the app. He called demonetization a necessary evil. Ten days or so later, having failed to exchange his old notes, the chai wallah was sullen. Customers at his stall now openly advise one another to not deposit money in banks and instead keep their savings at home. I’ve heard some locals say, “Modi nijei chor”: Mr. Modi himself is a thief.

I’m a Santhal, and I worried at first that minorities and the marginalized would bear the brunt of demonetization and that that would highlight ethnic and religious differences. A Brahmin man at my workplace, trying to reassure me, I guess, had said: “The difficulty will be faced by Muslims who deal in counterfeit notes.” Malda, a small Muslim-majority town known as the center of fake money in India, is just 40 miles or so from Pakur.

But I no longer fear that demonetization will exacerbate sectarian divides. Some days ago, the Hindu owner of a medicine shop in Pakur mumbled resignedly, “Modi has spoiled the market,” as he rummaged in his cash register for small change. By now it’s clear that everyone is hurting.

Hansda Sowvendra Shekhar is a government medical officer and author based in Pakur.