On May 14, thousands of residents of Moscow went into the streets to protest a project that entails the demolition of as many as 8,000 Soviet-era apartment buildings, now privately owned, to make space for an upscale residential development. The rally took place on Sakharov Prospect, named after the Soviet dissident and scientist Andrei Sakharov.

Moscow’s mayor, Sergei Sobyanin, did not attend. Mr. Sobyanin, a former chief of staff for President Vladimir V. Putin, is the author of draft legislation behind the scheme, which would uproot 1.6 million Muscovites, could increase the density of redeveloped areas by as much as threefold, and would cost an estimated $61 billion. One who did attend was Aleksei Navalny, the founder of the Anti-Corruption Foundation. The de facto leader of the Russian opposition, who had recently undergone eye surgery after a toxic dye was hurled at his face by an unidentified assailant, Mr. Navalny was led away by the police before he could speak. 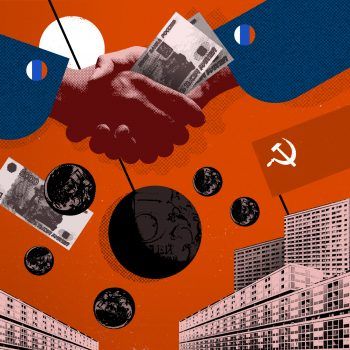 ostensible goal of Mr. Sobyanin’s renovations, a drastic expansion of a city resettlement program dating from 1999, is to improve the lives of ordinary people. His law, which is under consideration in the State Duma, Russia’s parliament, is aimed at some 25 million square meters (about 270 million square feet) of “morally and physically obsolete” Moscow housing. According to the city authorities, people would get modern housing instead of the shoddy old “khrushchevki,” three- and five-story apartment buildings named for the Soviet leader of the 1950s and ’60s, Nikita Khrushchev. The city budget, with a projected deficit of $3.2 billion for 2017, according to the Russian business daily Vedomosti, would be fattened by developers’ fees. Moscow would become “more European” and a “city of the future.”

The big obstacle the city faces is the people who don’t want to move. Under the law, apartment owners would be offered “analogous” apartments in the “same or adjacent districts.” But does adjacent mean that your new district will be as desirable as your current neighborhood? Would you still be walking distance from the subway? What about your children’s school? Even more problematic is the term “analogous” (as opposed to “equivalent”), for it replaces an objective price per square meter with the subjective judgment of a city employee.

A majority of residents whose buildings are to be razed became legal owners of their apartments during the privatization reforms of the early 1990s. Many of them are in old age, often with low incomes and poor mobility.

My husband’s 99-year-old great aunt is one such resident. She suffered permanent damage to her lungs and knees digging trenches against the advancing German tanks in the ice-cold November of 1941. For her, a one-room “morally obsolete” apartment in a quiet area of central Moscow constitutes her only tangible asset after four decades of toiling as an architect. Like most Russians, she got nothing from the sale of the former Soviet Union’s natural resources and industrial assets in the early ’90s. Her state pension is about $400 a month and her apartment represents her life’s savings.

She still enjoys the large common garden outside her apartment, and needs my mother-in-law, who is her caretaker, close by. But with her building scheduled to come down, she’d have to exchange all this for she knows not what.

As for the buildings themselves, not all are in disrepair. Many, brick-built, were made to last and require only renovation, not demolition. Some date from Stalin’s era, and a few from before the 1917 revolution. These should be made landmarks and protected, not destroyed. At the same time, less-central and less-coveted neighborhoods with decaying buildings have been excluded from the renovation program.

The Moscow authorities claim an 80 percent approval rating for the initiative. Leaving aside the credibility of such numbers, this does not resolve the question of what to do with the remaining 20 percent of homeowners who, for some reason, do not want to be made happy against their will.

The solution offered smacks more of old Bolshevist methods than good governance in a “city of the future.” Under the law, if two-thirds of residents in a given building vote for resettlement, the city issues a demolition order and gives the outvoted minority a “take it or leave it” resettlement offer, with a 60-day notice. Those who didn’t vote would be tallied as “for” demolition. The resettlement decision, the law states, cannot be appealed in court.

Many Russians see the program as a real estate boondoggle. Their cynicism is expressed in the phrase “raspil,” which means “sawing into pieces,” slang for graft in government-sponsored projects, which can reach 50 percent of the stated contract. Some liken the Moscow renovations to the Sochi Olympics, the most expensive Games in history, which yielded multibillion-dollar projects for businessmen with ties to Mr. Putin.

Indeed, the president had seemed to be on the same page as the mayor, whom Mr. Putin backed for re-election in 2013. He gave the project his blessing back in February, but now says he would not sign any law that violates citizens’ rights. So far, Moscow’s authorities show no sign of being troubled by his scruples. At packed, hastily scheduled meetings, the distressed homeowners encountered mumbled excuses from officials, and even insults.

“Sit down, calm down. Don’t show us your papers,” a deputy from the Duma barked at one of the homeowners who tried to recite the articles of the Constitution violated by the law.

Russia’s official media portrays the growing resentment as a “purely local affair.” Some see it as a form of “Nimbyism” and criticize “fat Muscovites” for failing to show gratitude for yet another favor the authorities are heaping on them. But people are no fools. They understand that Moscow’s renovations are a blueprint for similar developer bonanzas in other Russian cities. These schemes enrich oligarchs, while ordinary people are left to worry about whether they’ll end up living next to a garbage-processing site, as the residents in the notorious case of a building on Godovikova Street fear they might.

This time, though, the government may have overreached. Reports based on police estimates counted 8,000 demonstrators on May 14, but pictures posted on independent media suggested far more, closer to 30,000, as claimed by the organizers. Using a diminutive of Vladimir, the protesters waved placards that read, “Vova! Whom do you take us for?” and “You’ll get your answer in elections.” Mr. Putin and his mayor have been warned.

Anastasia Edel is the author, most recently, of Russia: Putin’s Playground.