Last week, an Islamist attacked the Strasbourg Christmas market in France and, once again, news outlets were filled with stories about Muslims and violence. Many observers believe that’s typical. Researchers have found again and again that coverage of Muslims in the American and global media is predominantly negative.

But are the media overly negative about Muslims? Given the prominence of violent Islamist terrorism and extremism since September 2001, negative stories about Muslims may simply be a result of journalists reporting the news.

We examined this and found that U.S. newspapers associate Muslims with far more negativity than terrorism or extremism would explain. Further, articles about Muslims that have nothing to do with terrorism are substantially more negative than articles about Catholics, Jews or Hindus.

To gauge the positive or negative tone of newspaper coverage, we use dictionaries of negative and positive words (such as “attack” or “beautiful”) to calculate the tone of individual articles. Roughly speaking, the more negative words in an article, the more negative we rate the article, and vice versa. We established a baseline for “neutrality” by finding the average tone of a representative sample of over 48,000 articles drawn from a range of U.S. newspapers between 1996 and 2015.

We first look at how articles about Muslims compare to articles about each of the other three groups. We find that articles mentioning Muslims are far more likely to be negative than those in any other category. Of all stories mentioning Muslims or Islam, 78 percent are negative, compared with only 40 percent of those about Catholics, 46 percent about Jews and 49 percent about Hindus. Muslims are clearly distinctive as the only group associated with overwhelmingly negative coverage. 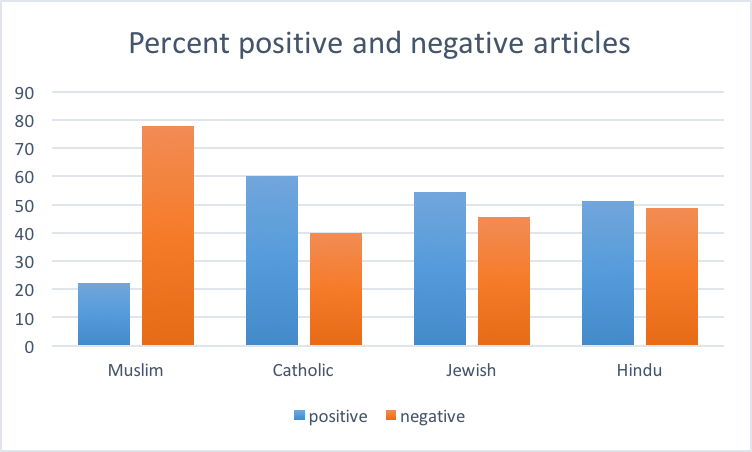 What if we filter out stories about terrorism and extremism, broadly defined?

To do this, we tag every article that includes the words “terrorism,” “extremism,” “radicalism,” “fundamentalism,” or “fanaticism,” or their variants. We then use statistical techniques to see whether this removes a significant amount of the negative language.

As expected, we find that articles that contain terrorism and extremism words are more negative than articles that do not. But even so, articles about Muslims or Islam that don’t mention terrorism or extremism are still very negative. In fact, 69 percent of non-terrorism-related articles mentioning Muslims are negative, only a slight decline compared with all Muslim articles. 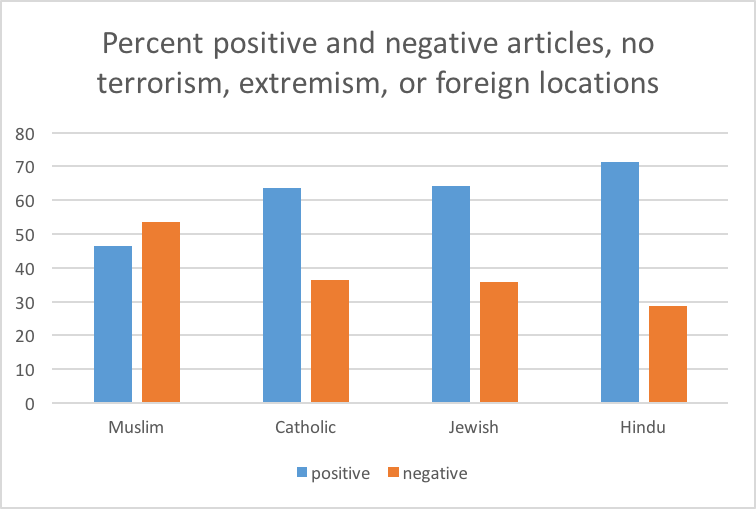 These negative articles about Muslims cover contentious domestic topics, such as political disputes, the “Ground Zero mosque” controversy, the Nation of Islam or criminal cases. For example, a USA Today article from September 10, 2010, cites a poll showing that “52% of Republicans believe Obama wants to spread sharia — Islamic law — around the world.” In another article from Aug. 24, 2010, in the New York Post, Donald Trump opines that the planned Park51 Islamic community center “is very insensitive and it should not be there.” A third article published in the Philadelphia Inquirer on Feb. 21, 1996, discusses a prison inmate who was reportedly “killed as he napped in his cell by a gang of Black Muslim inmates.”

Not all stories about Muslims are negative, of course. As we reported here in October, for example, articles that touch on faith and devotion are generally positive. But overall, newspaper reporting about Muslims in American newspapers is undeniably and substantially negative — more than is true for newspaper stories in general, or reporting about other religious groups.

More Americans get their information about Muslims from the news media than from any other source. Systematic, long-term negative coverage of Muslims is likely to influence newspaper readers’ beliefs and policy preferences. Newspapers and other media outlets may wish to examine whether their coverage inadvertently increases anti-Muslim attitudes among Americans.