On Nov. 6, the Liberian Supreme Court postponed the presidential runoff election between Sen. George Weah, from the Congress for Democratic Change, and Vice President Joseph Boakai, of the ruling Unity Party. It had been scheduled for the following day.

President Ellen Johnson Sirleaf was not a candidate, having completed two six-year terms.

Thus, this was to be the first peaceful and democratic transfer of power.

International and domestic observers had judged the Oct. 10 election as peaceful and generally well conducted, even though they did note some challenges, including some overcrowded precincts, some voters with voter cards but not on voter rolls, and some polling officials inconsistently applying procedures.

The Liberty Party’s candidate, Charles Brumskine, came in third, with 9.6 percent of the vote. His party brought a complaint before the Supreme Court, alleging irregularities and fraud. The court ruled that before moving forward, the National Electoral Commission (NEC) needed to investigate the allegations. At this point it is not clear when the runoff will be held.

But whoever the new Liberian president will be, he’ll face serious challenges running the country. Citizens don’t think the government has been doing an effective job as it is in difficult financial straits. The need for foreign investment conflicts with rural Liberians’ land rights and economic security. And the United Nations peacekeeping mission, which has been there since 2003, will be leaving the country in the spring. Let’s look at these four issues.

1. Public dissatisfaction with government performance and the economy

During Sirleaf’s tenure, Liberia made progress in rebuilding the country after 14 years of brutal and devastating civil war. But in several areas Liberians feel that progress hasn’t come quickly enough.

Liberians generally looked unfavorably on the government’s effectiveness in delivering education, jobs, improved roads and higher living standards for the poor. And most saw public officials as corrupt.

It is not surprising that performance evaluation and trust in the presidency, national and local representatives, the courts and the police declined significantly between 2008 and 2015.

Liberia’s GDP grew robustly for the first decade following the 2003 peace agreement. Then the Ebola epidemic erupted in 2014, killing more than 4,800 Liberians and practically halting economic activity. At the same time, global commodity prices fell, reducing income from essential Liberian exports such as iron ore and rubber. The resulting recession has been deep. As the graph below shows, GDP hasn’t yet to recover. 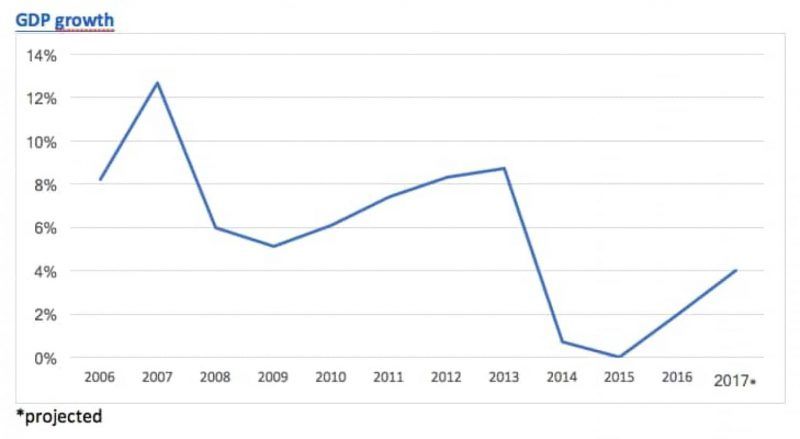 Ninety percent of the projected FY 2017-18 expenditures go to recurring expenditures, including salaries and debt servicing. Only 9.6 percent is allocated to the Public Sector Investment Plan for financing of solid waste management, construction of a medical laboratory, public schools and roads, among others. The government just doesn’t have much money for public investment – no matter what citizens want.

3. Land reform, or the conflict between economic development and the rights of rural communities

After the peace agreement, Liberia opened the country to direct foreign investment. Most of this investment has been in agribusiness and extractive industries such as forestry, palm oil, rubber and iron ore.

But that has been a problem. Most Liberians lack formal title to their lands. Currently, the government is the presumptive owner of any land that is not formally registered — and thus allows it to lease it to foreign companies. As a result, when investors come in, rural communities are often kicked out of their homes.

Liberian civil society organizations and international NGOs have lobbied the government and the National Assembly to adopt a new land law to “protect the land rights of rural Liberians”. But the Land Rights Act has lingered in the legislature since 2014.

During the summer leading up to the October elections, some expected that the law would finally pass as representatives running for reelection would want to deliver results to their constituents. Others remained skeptical that anything would change — too many in the legislature benefit directly from the current arrangements.

Skeptics were proven right when the law went nowhere in the Senate. The new president is likely to face an uphill battle getting the land reform passed.

In March 2018, United Nations Mission to Liberia, which had 15,000 peacekeepers, will end. That’s already increased the government’s fiscal difficulties  because mission staff spent money on food, housing and so on, and because the government has had to spend more resources on security and such civil administration tasks as running this year’s elections.

No matter who becomes president, all these challenges will remain — with no easy solutions ahead.

Agnieszka Paczynska is an associate professor at the School for Conflict Analysis and Resolution at George Mason University and a nonresident fellow at the Stimson Center. She observed Liberia’s Oct. 10 elections with the National Democratic Institute.