Zika, the mosquito-borne virus spreading through the Americas that has been linked to thousands of babies born with underdeveloped brains (microcephaly), is just the latest disease to spread panic around the world. And wait! News just in that it can be sexually transmitted too!

There is real cause for concern here. The virus is almost bound to spread to the rest of the world, except those parts with winters severe enough to kill off the two species of mosquito that bear it, Aedes aegypti and Aedes albopicti. And these mosquitoes are active during the day (unlike the Anopheles mosquitoes that spread the malaria parasite), so insecticide-treated bed nets don’t offer much protection.

The World Health Organization has declared a global public health emergency, and the media panic is building: first AIDS, now this. We are too many, we travel too much, and new pandemics are nature’s retaliation for our many sins. Clearly the apocalypse is upon us.

Well, no, actually. New diseases have been devastating human populations for at least 3,000 years, but no modern pandemic compares with the Antonine plague of the second century, the Justinian plague of the sixth century, or the Black Death of the 14th century, each of which killed between a quarter and a half of the populations affected. 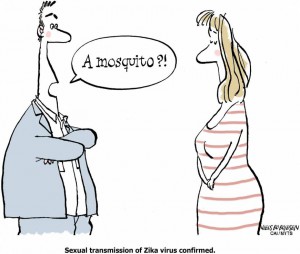 The worst pandemic of relatively modern times was the Spanish flu outbreak of 1918 to 1919, which killed between 3 and 5 percent of the world’s people. It was bad, but it hardly compares with the older plagues.

The slow-moving AIDS epidemic has killed about 30 million people since the 1980s, or less than half of 1 percent of the world’s current population. Two million people died of AIDS in the peak year of 2005, but the number of deaths in 2015 was only 1.2 million. New infections are also falling.

And Zika? So far as we know, it doesn’t kill anybody — apart from some of the microcephalic babies, about a quarter of whom die because their brains are too small to control their bodily functions. The majority, who do survive, face intellectual disability and development delays

Four-fifths of the adults who are infected experience no symptoms whatever, and the fever in those who do usually burns out in less than a week. Nor does the Zika virus remain in the body permanently: women who have been infected are advised to wait six months before becoming pregnant.

Zika has been around for quite a while. It was first identified in monkeys in Uganda in 1947, and the first human case was detected in Nigeria in 1954. It gradually spread east across Asia, and started crossing the Pacific early in this century. But by the time it reached Brazil last year, it had suddenly mutated into a form that causes microcephaly in some of the babies of infected mothers.

The link between Zika and microcephaly is only statistical for the moment, but it is pretty convincing. Brazil had only 150 cases of microcephaly in 2014, but it has had more than 4,000 in the past four months, and the Zika virus has been found in the brains of some of the afflicted babies.

This recent mutation in the Zika virus is not part of the endless seesaw battle between viruses and human immune systems. It is just a random event. It doesn’t even make Zika more infectious and thereby serve the “purposes” of the virus. It just has this deeply unfortunate side effect of damaging the development of human embryos. And these days we have ways of dealing with it.

Infectious diseases were probably not a problem for our pre-civilized distant ancestors, but since we began living in dense populations highly infectious diseases have been a constant companion. And for most of our history we had only quarantines to stop their spread.

In the past century, however, science has begun to get on top of the problem. Killer flu epidemics are still possible because the highly unstable influenza virus can mutate faster than we can create and mass-produce the appropriate vaccine, but smallpox has been eradicated and polio is on the brink of extinction.

Even the ancient scourge of malaria (not a viral disease) is in retreat. Deaths from malaria have halved in the past 15 years, and the new “gene-drive” technology opens up the prospect of eventual eradication of the disease.

Now that Zika has become a problem, researchers have started working on a vaccine and in due course one will almost certainly become available. Another approach may be to target the species that propagate it by releasing genetically modified sterile mosquitoes to reduce the size of the insect population. It will take time, and it may be necessary to use both approaches, but we are not facing a permanent global threat.

The glass is not half empty. It is half full, and still filling up.

Gwynne Dyer is an independent journalist.