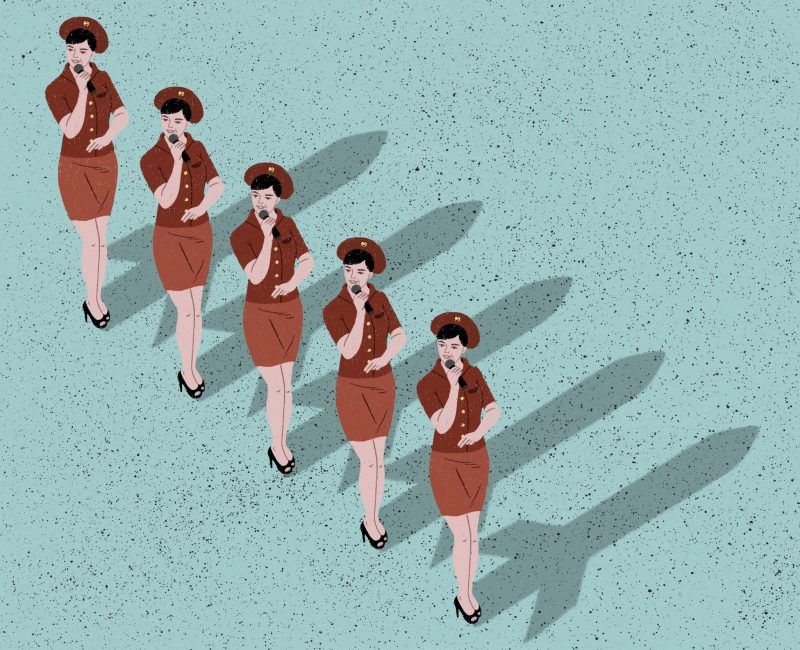 22 Olympians compete in Pyeongchang this month, they won’t be alone: Accompanying them will be 230 young North Korean women, all of them at least 5 feet 3 inches, all of them deemed “pretty” by the state.

Western news outlets have taken to calling these women an “army of beauties”; in South Korea, they are often “beautiful cheerleaders.” In reality, they are mostly students, selected from upper-class families in Pyongyang for their loyalty to the party, their musical talent and their looks. These women are deployed abroad by the regime on special occasions, when it wants to show its best face — or best faces, rather — to the world.

The use of pretty young women to represent North Korea is not new. In addition to the cheerleaders, there is the Moranbong band, the all-female music group whose members are handpicked by Kim Jong-un. There are North Korea’s state-run overseas restaurants, which exist to raise foreign cash and which visitors frequent less for the food and more for the novelty of being served by young North Korean waitresses who sing and dance in nightly shows.

For the regime, good looks are just another asset that citizens are obliged to wield on behalf of the Democratic People’s Republic of Korea — no surprise there. What is more disturbing is the way the outside world, and particularly South Korea, embraces these displays of state-promulgated sexism.

In fact, the North Korean cheer squad gained international notice only because of South Korea. During a 2006 speech at Pusan University, the South Korean president at the time, Kim Dae-jung, recounted the story: The mayor of Pusan was worried that the 2002 Asian Games, hosted by his city, would be poorly attended. The mayor brought up the possibility of North Korean athletes’ participating as an attention-grabbing ploy; Kim Dae-jung did him one better, sending a special envoy to the North’s leader, Kim Jong-il, to ask him to send not only athletes but cheering fans as well.

“Make sure the cheerleaders are pretty girls,” Kim Dae-jung said. Kim Jong-il complied, sending over 288 just such women. The students broke into applause when Kim Dae-jung concluded his account by saying how pleased he was with the outcome: The girls were pretty, the games were a success, and the city of Pusan made money.

The South’s fascination with North Korea’s cheerleaders is an extension of its attitude toward North Korean women in general: It views them as exotic, enigmatic, charming in their naïveté.

During past visits, the South Korean media have showered praise on the women for their “pure, innocent beauty,” as if they were farm girls from the hills and not the elite from their country’s capital. Plastic surgery is among South Korea’s biggest industries; these Northern women are held up, by contrast, as representatives of natural Korean beauty — despite the presence of plenty of plastic surgery among the North Korean elite as well.

On Wednesday, within hours of the cheerleaders’ arrival, photos of them had begun appearing on South Korean news. But there are some signs that North Korea’s lipstick diplomacy isn’t as effective as it once was. Thirteen years since the cheerleaders’ last visit to the South in 2005, some of their exoticism has worn off. Over 30,000 defectors now live in South Korea, and they’ve helped remove some of the sense of mystery. At the same time, reality TV shows featuring North Korean women — called “defector beauties” — telling all about their lives back home or participating in “The Bachelor”-type searches for love have chipped away at the sense of the North as a land of innocents.

The younger generation of South Koreans not only has more exposure to the North but is more jaded about the united-Korea propaganda that the cheerleaders represent. They’re also more aware of sexist dynamics: Younger Koreans are outraged, for example, that the South Korean women’s hockey team — but not the men’s — has been forced to reshuffle its lineup at the last minute to incorporate 12 North Korean players, thus sacrificing Southern players’ dreams for the sake of politics. This generation also had its own version of #MeToo in October 2016, a full year before the first Harvey Weinstein stories.

And yet, if the public response to visits to South Korea by a former lead singer of Moranbong, Hyun Song-wol, is any indication, a pretty young woman from the right Pyongyang family need not yet worry.

Ms. Hyun arrived in Seoul on Jan. 21 for two days as part of a North Korean delegation. She returned for a second trip this month. The excitement surrounding her visits has been so elevated that the media coined the phrase “Hyun Song-wol syndrome.” Most coverage consisted of detailed analyses of her appearance: a fox stole and a dark coat, her “intense eyes,” her “imposing smile.”

The news programs ran endless close-ups of her face. Perhaps that’s because she hardly said anything. Perhaps that’s because she had been specifically selected by her country to pose before foreign cameras, look pleasant and distract the world from the fact that no matter how picture-perfect the athletes appear as they march under one flag at the opening ceremony of the Games, it’s been just five months since North Korea conducted its sixth nuclear test.

Suki Kim is the author of Without You, There Is No Us: Undercover Among the Sons of North Korea’s Elite.