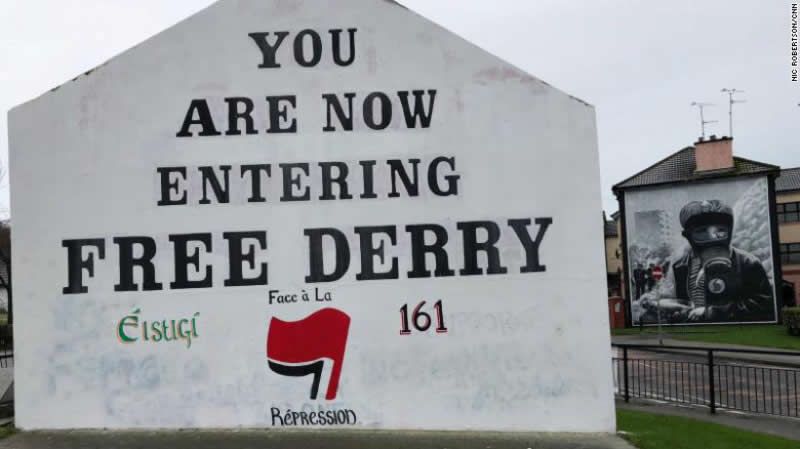 There are times when working as a journalist provides a front-row seat to some of the most important events taking place on Earth. On the downhill slope to Brexit, Derry -- also known as Londonderry -- certainly fits the bill.

Since the end of The Troubles, Derry has become a vibrant cultural hub. It hosts Europe's largest and most vibrant Halloween celebration each year, attracting thousands of tourists.

It was designated the UK's City of Culture in 2013.

But a car bomb last weekend that blasted granite chunks off the street and through windows lifted the curtain on something darker going on in this city on the border with the Republic of Ireland.

It revealed an unholy mess that has gone unnoticed by too many for too long. As they say in Derry, even the dogs in the streets know. So why don't the politicians who sit in London?

The New IRA, whom the police blame for the blast, are fed from the same trough that sustains criminals and terrorists the world over: ideology, hardship and disillusionment.

In Derry, it's one part desperation and five parts Republican ideology.

Perhaps most striking to outsiders visiting Derry is how stillborn the peace deal of 1998 feels here.

We know that the old IRA didn't go quietly in to the night. A small number splintered off to keep the fight going, while many others who chose peace still felt betrayed by the group's leadership.

I follow news reports of pipe bombs, hoaxes, the occasional shooting. They come through the news cycle in peaks and troughs of activity.

The Good Friday Agreement wasn't the last gasp of Republicanism; more like the deep rasping of a wounded beast recuperating.

People here tell me Derry has become the UK's spy agency MI5's training ground. While they don't offer evidence, they have bucket loads of anecdotal insights, like the speed cameras on border roads that they've become convinced are silent sentinels, spying for the state they abhor.

Whether they are right or not is not the point. The point these people -- who used to pit their lives and wits against what they saw as an occupying enemy force and are now peaceful -- are making is that outside of the security services, the rest of the UK is blissfully unaware of how events are unraveling.

And that's how generations of Republicans will always see it. The old IRA was so penetrated by spies. Operatives were caught, guns didn't work and bombs failed to explode. It's what ended their war.

MI5, the army and the police all ran their own agents. Recruitment of informants was their bread and butter.

When these people talk of the New IRA, they do so partly out of respect that they once fought the British state, likening it, for my understanding, to London being ruled from Berlin had the Second World War been lost. So despite their belief in peace now, how could they criticize today's activists picking up the historic Republican baton?

Yet they also laugh. A "firework" is how they describe Saturday's bomb. Back in their day, they tell me, "we flattened buildings." They poke fun at a former co-conspirator who loudly denounced the attack: "in his day he was picked up driving a 400-lb. car bomb."

The humor here is dark. But it's necessary: Bad things are happening in Derry.

They call the deprived housing estates where they work a "dark corner" that's been unraveling beyond all but the most scrutinizing eyes. They are at the place where crime, community, the New IRA and the police almost intersect.

Like an invisible glue holding together the flimsy fabric of one of the UK's most impoverished cities.

When groups like the New IRA want to kill drug dealers, when-drug addled citizens beat their families, when police need help policing and gunmen want to parade in paramilitary paraphernalia, they stop the house cards from tumbling down.

They say the economy is in the doldrums, taking their community with it. Suicide rates are up, they say, as is drug abuse.

Users rifle pensioners' bins to see what meds they're on, then break into their homes. They pool the stash for a game called "suicide pack" in which they grind up the ungodly
stolen pharmaceutical cocktail. One person takes the lot, while the others watch to see if they survive.

The quiet growth of the New IRA

Back in the day, in the absence of police, the community expected the IRA to reign in thieves and drug dealers. It's this pattern of expected behavior that today gives people in the New IRA some acceptance -- even legitimacy.

The Good Friday Peace agreement of 1998 has become a chimera.

Through all the gaps, the New IRA has been able to put down roots, grow support, and sprout a political wing -- although they disavow the connection. They are small and avowedly violent in a town desperate to keep its peace.

But Republican revolutionaries can quote chapter and verse how uprisings were begun by a handful of men with no popular mandate -- who decades later were celebrated as heroes.

For the New IRA, the current hostile conditions are only likely proof to themselves they are in the right.

Yet the winds of history could turn in their favor if politicians in Westminster underestimate Ireland's political climate.

Should Theresa May lose control, should Brexit get botched and border posts built, the New IRA will be among the first to launch attacks at the installations.

Everyone I spoke to told me sure as night follows day, if border installations go up, they will be targeted. And a small shift in perception of, and support for, the New IRA could follow.

It wouldn't be the first time Westminster played into Irish Republicans' hands. Internment of IRA suspects in the early 1970s was the organization's best recruiting tool until Margaret Thatcher faced down Republican hunger strikers in the early 1980s.

Both were miscalculations that gave Republicans what they needed most.

Today, the New IRA has little sway, and barely a voice. But don't be fooled by ignorance of Derry that they or their city are benign.