Fifty years ago this week, more than a million Americans drove, flew and even boated to Florida’s Cape Canaveral to witness the launch of Apollo 11, which would culminate four days later on July 20, 1969, with America’s victory over the Soviet Union in the race to the moon.

Less than a month later, nearly 500,000 young people caravaned, hitchhiked and walked through standstill traffic to the Woodstock music festival in upstate New York, where they danced in rain and mud to songs critical of the country, especially for its involvement in the Vietnam War.

How could these two events, which seemed worlds apart, have taken place so close together?

One answer is that Apollo 11 and Woodstock epitomized a stark cultural divide, peaking in the summer of 1969, over the state and direction of the nation. Should America have spent $20 billion to win a Cold War battle to put the first man on the moon? Or should the country instead have made that kind of financial and political commitment to tackle the host of problems that then convulsed our home planet — not only the war in Southeast Asia, but also racial discrimination, pollution and gender inequality?

Those flocking to Cape Canaveral no doubt endorsed the former. President Richard Nixon called them “the forgotten Americans”, a “silent majority” who in 1957 were alarmed when the Soviets launched Sputnik, the world’s first orbiting satellite. They enthusiastically supported the American space program both as a means of catching up with the Russians technologically and of promoting America’s free-market democratic system internationally. 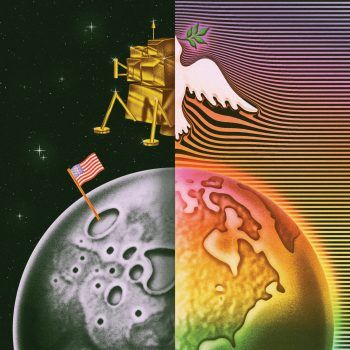 But those who gathered at Woodstock and others opposing the war thought otherwise. To them, the Apollo mission was part of “the Establishment”, a cog in the “military-industrial-space complex” that worked clandestinely to retool space technology for use in Vietnam. Students from the New Left participated in sit-ins at Columbia University’s Pupin Physics Laboratories and undertook a yearlong campaign of teach-ins, work stoppages and demonstrations against M.I.T.’s famed Instrumentation Laboratory, because both conducted research for NASA that was deployed by the military in Vietnam.

The entire space program, said a member of Students for a Democratic Society, which organized similar anti-NASA demonstrations on college campuses across the country, was a “weapon of the military establishment which is draining our resources”.

They weren’t alone in raising such questions. The civil rights movement forcefully called out the space race as well. On the eve of the Apollo 11 launch, the Rev. Ralph Abernathy, who had become president of the Southern Christian Leadership Conference after the assassination of the Rev. Dr. Martin Luther King Jr. the year before, marched to the western gate of the Kennedy Space Center with 25 poor African-American families and four scruffy mules pulling two rickety wagons.

This Poor People’s Campaign, Mr. Abernathy explained to the gathered press, was not protesting the Apollo 11 rocket, which was visible in the distance on its launchpad. Instead it was questioning what he called America’s “distorted sense of national priorities” that had left one-fifth of its citizens without adequate food, clothing and shelter. “I want NASA scientists and engineers and technicians to find ways to use their skills to tackle the problems we face in society”, Mr. Abernathy said.

Civil rights activists amplified their argument with sit-ins at the Johnson Space Center in Houston, demonstrations at ticker-tape parades in New York City for returning astronauts and boycotts of Apollo launches, lunar landings, astronaut moonwalks and splashdowns, which they chose not to watch or celebrate.

Other grass-roots movements took up the cause. Environmentalists blamed Apollo launches for fouling Cape Canaveral, and the space race for distracting Americans from a mounting pollution problem. They also lobbied Congress to force NASA to be more environmentally responsible. Feminists, in coordination with the National Organization for Women, joined letter-writing campaigns, picketed outside NASA’s Washington headquarters and filed lawsuits to change NASA’s sexist hiring practices and its all-male astronaut corps.

Congress and NASA had been able to largely ignore these grass-roots complaints because the nation as a whole was behind the space effort. But after Neil Armstrong and Buzz Aldrin stepped on the lunar surface, winning the race, support for space exploration began to wither while public pressure on Congress grew to reallocate the billions devoted to space. Soon politicians were echoing the activists.

In a speech just before the Apollo 11 launch, Senator Ted Kennedy — whose brother, President John Kennedy, vowed to put a man on the moon before the 1960s ended — argued that “a substantial portion of the space budget can be diverted to more pressing problems here at home”. Congress soon agreed and by 1974 slashed the space agency’s budget by more than 20 percent.

To stem decline in its popularity and bottom line, NASA began to address some of those grass-roots concerns. In 1971 the space agency scrapped much of its research for the Vietnam War. The following year it launched what would eventually become known as Landsat, the first of many satellites to gather data used by environmental scientists to track land, air and water pollution. And the year after, NASA took the first steps to opening up the astronaut corps to women.

The space agency also created its own Urban Systems Project Office in 1972 to retool space technologies to aid poor inner-city residents. In one effort, which was only partly successful, NASA engineers teamed up with the Department of Housing and Urban Development to repurpose energy-efficient heating and cooling systems, originally used in the Apollo space capsule, for use in low-income housing projects.

Today, the space race has become a mostly commercial enterprise pursued by billionaire entrepreneurs like Elon Musk, Jeff Bezos and Richard Branson. “We want a new space race”, Mr. Musk said, but one that pits private companies rather than nations against one another.

Such privatization has succeeded wonderfully on an economic level. Mr. Musk built his Falcon Heavy rocket for one-tenth the price of the Saturn V that sent Armstrong, Aldrin and Michael Collins to the moon. Americans should encourage these free-market efforts but also understand their potential pitfalls.

Private spaceflight companies like SpaceX, Blue Origin and Virgin Galactic are bound to the interests of their shareholders, not the public. Unlike NASA in the late 1960s and ’70s, they can ignore criticism from the streets and focus instead on the wealthy who want to buy tickets to the stars.

If we prioritize these commercial ventures at the expense of a robustly funded national space program, we distance space exploration from the public sphere, limiting our ability to guide and shape it. We also weaken our democracy.

That is why this week, on the 50th anniversary of Apollo 11’s launch, we should not only celebrate the astounding accomplishment of landing two men safely on the moon. We must also applaud those who took to the streets to ground the space race in problems back on Earth.

Neil M. Maher is a history professor at the New Jersey Institute of Technology and Rutgers University, Newark, and the author, most recently, of Apollo in the Age of Aquarius.