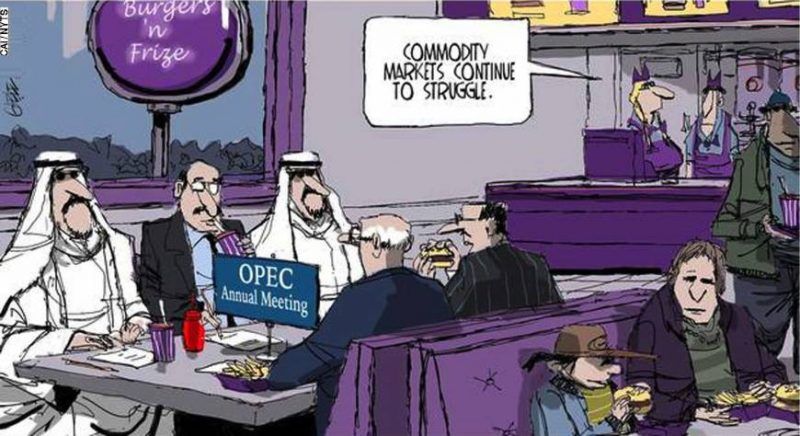 “The market can stay irrational longer than you can stay solvent,” said John Maynard Keynes (or maybe it wasn’t him, but no matter). At any rate, that was the eternal verity the Saudi Arabians were counting on when they decided to let oil production rip — and the oil price collapse — in late 2014.

The Saudi objective was to keep the oil price low enough, long enough, to drive American shale oil producers out of business and preserve the OPEC cartel’s market share. (The Organization of Petroleum Exporting Countries controls only 30 percent of world oil production, which is already very low for what was meant to be a price-fixing cartel.)

The end of sanctions against Iran and that country’s push to raise production and regain its old market share put further downward pressure on the oil price. So did the slowdown in China’s economy.

High-cost shale-oil producers in the United States are really hurting (U.S. oil production this year will be down by 700,000 barrels a day), but the OPEC producers are hurting too — and it looks like the Saudis just blinked.

Last week on Tuesday, Saudi Arabia, Russia, Venezuela and Qatar announced that they would freeze their oil production at the January level. Most other OPEC members are expected to follow suit, and since Saudi Arabia and Russia (not an OPEC member) are the second- and third-largest oil producers in the world, the freeze will affect almost half of the world’s oil production.

That will not be enough to rescue the economies of OPEC countries and Russia from their current crisis. (All their economies are actually shrinking, and Saudi Arabia has gone from a budget surplus amounting to 13 percent of GDP in 2012 to a deficit of 21 percent last year.) Freezing production will not get the oil price back up when the current global production level is at least 2 million barrels a day higher than global demand.

In fact, the oil glut is so great that the world is running out of places to store the excess production. U.S. and European oil storage facilities are full, and people are already talking about buying tankers as floating storage. Since the beginning of this year the oil price, as high as $115 a barrel less than two years ago, has dipped down into the $20 range several times.

Not only will the new production freeze not solve this problem; it won’t really even freeze production. If there’s one thing that OPEC members do well, it is to cheat on their production figures and pump more oil than they admit. As for Russia, it broke the last deal it made with OPEC about freezing production, and it will probably do it again.

Ineffective as this deal is, it illustrates the mounting panic in the major oil producers as the prospect of a long period of very low oil prices opens out ahead of them. Saudi Arabia and Russia are edging toward a direct military confrontation in Syria — the Russian Air Force backs the Assad regime, and the Saudis are talking about sending ground troops to fight it — but the oil price transcends such issues.

So what conclusions may we draw from all this? First, the price of oil will stay down. In the short run it may even go lower: Morgan Stanley analysts say that oil “in the $20s” is possible if China devalues its currency further, and Standard Chartered Bank predicts that prices could hit just $10 a barrel.

The production freeze might allow the oil price to return to the low $40s in the medium term, if Chinese demand does not collapse entirely and if the producers keep their promises. That price would enable most of the fracking operations in the U.S. to stay in business, but it would still fall far short of balancing the budgets of Russia and Saudi Arabia. They can’t really afford to have a full-scale war over Syria.

Second, OPEC members with large populations and national budgets that depend heavily on oil revenues (more than 75 percent) face the prospect of major civil unrest or even revolution. This includes Nigeria, Algeria, Venezuela and Angola. Iran and non-OPEC member Mexico face lesser political risks, but they are not negligible.

Finally, a prolonged period of low oil and gas prices will hit the whole array of climate-friendly energy and transportation technologies, from wind farms to electric cars. Energy costs still matter, even if governments can rectify the balance to some extent with carbon pricing and other regulatory measures. But coal, the most polluting of the fossil fuels, still faces early extinction, since its main rival for power generation is ever cheaper gas.

A ruthlessly rational OPEC leadership (i.e., a Saudi Arabia run by competent economists and strategists) would just end the cash hemorrhage and reduce the political risk by cutting production sharply and getting oil prices back up. But the great gamble to break the U.S. frackers by driving them into bankruptcy was not an ownerless, free-floating policy that somehow took root in OPEC soil.

It was a specific strategy that was conceived and promoted by particular powerful individuals, most notably high-ranking Saudi individuals. They would lose a great deal of face if they had to abandon it, so it will be with us for a while yet.

Gwynne Dyer is an independent journalist and military historian based in London.