Ocean and coastal waters around the world are beginning to tell a disturbing story. The seas, like a sponge, are absorbing increasing amounts of carbon dioxide from the atmosphere, so much so that the chemical balance of our oceans and coastal waters is changing and a growing threat to marine ecosystems. Over the past 200 years, the world’s seas have absorbed more than 150 billion metric tons of carbon from human activities. Currently, that’s a worldwide average of 15 pounds per person a week, enough to fill a coal train long enough to encircle the equator 13 times every year.

We can’t see this massive amount of carbon dioxide that’s going into the ocean, but it dissolves in seawater as carbonic acid, changing the water’s chemistry at a rate faster than seen for millions of years. Known as ocean acidification, this process makes it difficult for shellfish, corals and other marine organisms to grow, reproduce and build their shells and skeletons. 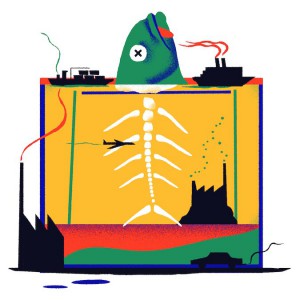 About 10 years ago, ocean acidification nearly collapsed the annual $117 million West Coast shellfish industry, which supports more than 3,000 jobs. Ocean currents pushed acidified water into coastal areas, making it difficult for baby oysters to use their limited energy to build protective shells. In effect, the crop was nearly destroyed.

Human health, too, is a major concern. In the laboratory, many harmful algal species produce more toxins and bloom faster in acidified waters. A similar response in the wild could harm people eating contaminated shellfish and sicken, even kill, fish and marine mammals such as sea lions.

Increasing acidity is hitting our waters along with other stressors. The ocean is warming; in many places the oxygen critical to marine life is decreasing; pollution from plastics and other materials is pervasive; and in general we overexploit the resources of the ocean. Each stressor is a problem, but all of them affecting the oceans at one time is cause for great concern. For both the developing and developed world, the implications for food security, economies at all levels, and vital goods and services are immense.

This year, the first nationwide study showing the vulnerability of the $1 billion U.S. shellfish industry to ocean acidification revealed a considerable list of at-risk areas. In addition to the Pacific Northwest, these areas include Long Island Sound, Narragansett Bay, Chesapeake Bay, the Gulf of Mexico, and areas off Maine and Massachusetts. Already at risk are Alaska’s fisheries, which account for nearly 60 percent of the United States commercial fish catch and support more than 100,000 jobs.

Ocean acidification is weakening coral structures in the Caribbean and in cold-water coral reefs found in the deep waters off Scotland and Norway. In the past three decades, the number of living corals covering the Great Barrier Reef has been cut in half, reducing critical habitat for fish and the resilience of the entire reef system. Dramatic change is also apparent in the Arctic, where the frigid waters can hold so much carbon dioxide that nearby shelled creatures can dissolve in the corrosive conditions, affecting food sources for indigenous people, fish, birds and marine mammals. Clear pictures of the magnitude of changes in such remote ocean regions are sparse. To better understand these and other hotspots, more regions must be studied.

We cannot yet predict exactly how ocean acidification will affect connections among the world’s many different marine organisms, but we do know the consequences will be profound. Research already points to the unnatural behavior of coral clownfish in an acidified environment. These fish wander farther from their natural protection, making them more vulnerable to predators. We have yet to learn how salmon and other commercially important fish will adapt as acidification erodes their food supply, especially since some of the most vulnerable species are the small, simple life forms that juvenile salmon and other fish depend on. There may be cascading impacts that we don’t yet fully understand. Acidification won’t make seawater dangerous for swimming, but it will upset the balance among the multitudes of microscopic life found in every drop of seawater. Such changes will almost certainly affect seafood supplies and the ocean’s ability to store pollutants, including future carbon emissions.

To understand where the challenges lie, we need better ocean-measuring capability, linked with improved modeling of marine ecological systems. Smart investments in monitoring and observing are critical to building resilience and hedging risks that can directly affect economies at all levels. There is urgency to such investments. The U.S. National Oceanic and Atmospheric Administration conducts round-the-clock monitoring of global CO2. The rate of increase has never been higher than during the past three years, accelerating the ocean acidification process.

Both the United States and Britain recognize that rising CO2 and the production of other greenhouse gases have widespread consequences and have called for strong action to reduce carbon emissions. We are pleased that representatives of our two nations help lead the pioneering Global Ocean Acidification Observing Network, a collaboration of scientists from 30 countries. This network is based on the premise that we can’t manage what we don’t measure. It’s designed to provide the basis for robust forecasting by integrating existing observations from unmanned vehicles, research vessels, volunteer observing ships and many more assets.

The new network will build on the success of the American and British teams that recently came in first and second in the Wendy Schmidt Ocean Health XPRIZE by developing affordable, accurate sensor technology. Such technology will help coastal countries around the world obtain the environmental information required to underpin sound policy and build community and global resilience. Already oyster hatcheries on the U.S. West Coast are working with scientists to monitor water quality and adapt to ocean acidification so baby oysters can survive. And while ocean acidification is a global concern, inroads are occurring at the local scale, encouraging control, for example, of nutrient pollution that can exacerbate acidification.

When it comes to the health of the sea, we are all stakeholders. The ocean is a harbinger of our own well-being and the resilience and economic viability of our planet. We ignore the risks of ocean acidification at our own peril, and that of future generations.