A decade ago I bought my first smartphone, a clunky little BlackBerry 8830 that came in a sleek black leather sheath. I loved that phone. I loved the way it effortlessly slid in and out of its case, loved the soft purr it emitted when an email came in, loved the silent whoosh of its trackball as I played Brick Breaker on the subway and the feel of its baby keys clicking under my fat thumbs. It was the world in my hands, and when I had to turn it off, I felt anxious and alone.

Like most relationships we plunge into with hearts aflutter, our love affair with digital technology promised us the world: more friends, money and democracy! Free music, news and same-day shipping of paper towels! A laugh a minute, and a constant party at our fingertips.

Many of us bought into the fantasy that digital made everything better. We surrendered to this idea, and mistook our dependence for romance, until it was too late.

Today, when my phone is on, I feel anxious and count down the hours to when I am able to turn it off and truly relax. The love affair I once enjoyed with digital technology is over — and I know I’m not alone.

Ten years after the iPhone first swept us off our feet, the growing mistrust of computers in both our personal lives and the greater society we live in is inescapable. This publishing season is flush with books raising alarms about digital technology’s pernicious effects on our lives: what smartphones are doing to our children; how Facebook and Twitter are eroding our democratic institutions; and the economic effects of tech monopolies. 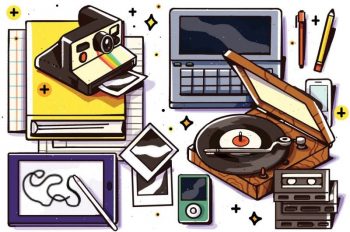 A recent Pew Research Center survey noted that more than 70 percent of Americans were worried about automation’s impact on jobs, while just 21 percent of respondents to a Quartz survey said they trust Facebook with their personal information. Nearly half of millennials worry about the negative effects of social media on their mental and physical health, according to the American Psychiatric Association.

As much as we might fantasize about it, we probably won’t delete our social media accounts and toss our phones in the nearest body of water. What we can do is to restore some sense of balance over our relationship with digital technology, and the best way to do that is with analog: the ying to digital’s yang.

Thankfully, the analog world is still here, and not only is it surviving but, in many cases, it is thriving. Sales of old-fashioned print books are up for the third year in a row, according to the Association of American Publishers, while ebook sales have been declining. Independent bookstores have been steadily expanding for several years. Vinyl records have witnessed a decade-long boom in popularity (more than 200,000 newly pressed records are sold each week in the United States), while sales of instant-film cameras, paper notebooks, board games and Broadway tickets are all growing again.

This surprising reversal of fortune for these apparently “obsolete” analog technologies is too often written off as nostalgia for a predigital time. But younger consumers who never owned a turntable and have few memories of life before the internet drive most of the current interest in analog, and often include those who work in Silicon Valley’s most powerful companies.

Analog, although more cumbersome and costly than its digital equivalents, provides a richness of experience that is unparalleled with anything delivered through a screen. People are buying books because a book engages nearly all of their senses, from the smell of the paper and glue to the sight of the cover design and weight of the pages read, the sound of those sheets turning, and even the subtle taste of the ink on your fingertips. A book can be bought and sold, given and received, and displayed on a shelf for anyone to see. It can start conversations and cultivate romances.

The limits of analog, which were once seen as a disadvantage, are increasingly one of the benefits people are turning to as a counterweight to the easy manipulation of digital. Though a page of paper is limited by its physical size and the permanence of the ink that marks it, there is a powerful efficiency in that simplicity. The person holding the pen above that notebook page is free to write, doodle or scribble her idea however she wishes between those borders, without the restrictions or distractions imposed by software.

In a world of endless email chains, group chats, pop-up messages or endlessly tweaked documents and images, the walled garden of analog saves both time and inspires creativity. Web designers at Google have been required to use pen and paper as a first step when brainstorming new projects for the past several years, because it leads to better ideas than those begun on a screen.

In contrast with the virtual “communities” we have built online, analog actually contributes to the real places where we live. I have become friendly with Ian Cheung, the appropriately opinionated owner of June Records, up the street from my home in Toronto. I benefit not only from the tax revenues that June Records contributes as a local business (paving the roads, paying my daughter’s teachers) but also from living nearby. Like the hardware store, Italian grocer and butcher on the same block, the brick and mortar presence of June adds to my neighborhood’s sense of place (i.e., a place with a killer selection of Cannonball Adderley and local indie albums) and gives me a feeling of belonging. I also have no doubts that, unlike Twitter, Ian would immediately kick out any Nazi or raving misogynist who started ranting inside his store.

Analog excels particularly well at encouraging human interaction, which is crucial to our physical and mental well-being. The dynamic of a teacher working in a classroom full of students has not only proven resilient, but has outperformed digital learning experiments time and again. Digital may be extremely efficient in transferring pure information, but learning happens best when we build upon the relationships between students, teachers and their peers.

We do not face a simple choice of digital or analog. That is the false logic of the binary code that computers are programmed with, which ignores the complexity of life in the real world. Instead, we are faced with a decision of how to strike the right balance between the two. If we keep that in mind, we are taking the first step toward a healthy relationship with all technology, and, most important, one another.

David Sax is the author of The Revenge of Analog: Real Things and Why They Matter.