“I used to feel my life was too straight, too linear.”

The speaker was Junaid Hafeez, a young poet and Fulbright scholar from the south of Pakistan, telling a radio show host in 2011 why he had given up studying medicine for a life in literature. Today, he is in jail on a blasphemy charge that carries the death penalty, and is mourning the lawyer who was murdered earlier this month for defending him.

Before his arrest, Hafeez was teaching in the English Department at Bahauddin Zakariya University in Multan, a city in Punjab Province close to where he grew up. His personal charisma and liberal views had won him a following among students, as well as the envious attention of faculty members.

One day in 2013, a student affiliated with Islami Jamiat Talaba, a wing of the hard-line Jamaat-i-Islami party, accused Hafeez of insulting the Prophet Muhammad on Facebook. The student had no evidence, but no evidence was needed. 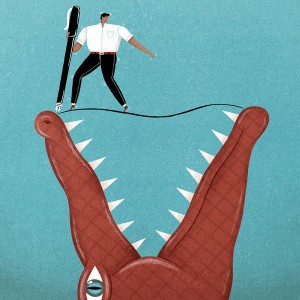 Hard-line students soon held a protest crying out for Hafeez’s execution. University administrators backed away. The police registered a case for blasphemy against Hafeez. They did not ask cybercrime specialists to investigate the accusation, relying instead on a fatwa issued by a seminary.

For months Hafeez’s father tried to find a lawyer. Finally he petitioned Rashid Rehman, the 53-year-old special coordinator for the Human Rights Commission of Pakistan in Multan. A legal expert with 20 years of activism, Rehman was known as a go-to lawyer for hopeless causes. Despite the danger, he agreed to take Hafeez’s case. Defending a man accused of blasphemy, Rehman told a reporter in April, was like “walking into the jaws of death.”

Those jaws have been open wide since the 1980s, when the military dictator Gen. Muhammad Zia ul-Haq updated a set of colonial laws that criminalized “insulting the religion of any class of persons.” The original laws were devised in the late 19th century by a paternalistic British government trying to keep its multifaith subjects from fighting one another. Those laws were worded generally, and prescribed fines and, at most, two-year prison terms.

General Zia’s amendments particularized the insults and tailored the provisions to favor a stringent Sunni strain of Islam. They criminalized the desecration of the Quran, any defiling of the name of the Prophet Muhammad, and disrespectful remarks about his companions — a jab at Pakistan’s Shiite minorities, who dispute the outcome of the succession struggle that followed the Prophet’s death. Moreover, any attempt by members of the outlawed Ahmadi sect to refer to themselves as Muslims was criminalized. Punishments were upgraded: Blasphemers could be executed or jailed for life.

General Zia died in an air crash in 1988, but his legacy remains. It includes the empowerment of theological figures in every stratum of life — from clerics and televangelists to fanatical academics and Shariah judges — all aided in their righteous endeavors by a legislature that remains intractably Zia-ist.

The blasphemy laws are part of this package. For decades they had been rarely used, with only a handful of cases before the mid-1980s. But General Zia’s amendments opened the floodgates: More than a thousand cases have been reported since then, according to the Human Rights Commission of Pakistan. Just last week the Punjabi police, prompted by a Sunni extremist, brought blasphemy charges against 68 lawyers.

The blasphemy laws can serve just about anyone with a dark design — an angry relative, an envious colleague, a neighbor with his eye on your property. But the greatest beneficiary has been the professional Islamists, who specialize in their application to encroach on both state and society.

I got a sense of this in August 2009 when I visited the torched Christian neighborhood of Gojra, a small city in the heart of Pakistan. A Muslim peasant had spread a rumor that Christian neighbors had desecrated a Quran, and it degenerated into a riot after clerics riled up Muslims with hysterical broadcasts from the loudspeakers of mosques. When the police tried to stop the mullahs, they quoted the blasphemy laws and threatened to turn the mob against the authorities for “protecting the blasphemers.” Some 60 Christian houses were set on fire and eight Christians killed.

The Islamists would have us think that all believers are susceptible to spontaneous eruptions of violence when their religion is offended. But the reality, as documented by a government report on the Gojra incident, is more treacherous and tragic. A blasphemy charge, once taken up by a religious activist, can legitimate myriad other interests, from petty personal needs to large political plans, and create an exhilarating free-for-all atmosphere. The Gojra rioters included the constituents of the local opposition politician, peasants and day-laborers from neighboring areas who joined in the looting and armed members of the now-banned Sunni militant group Lashkar-e-Jhangvi.

Pakistan’s Islamist groups have little incentive to reform the blasphemy laws. They have even expanded the understanding of blasphemy so that it now includes any criticism of the laws themselves. This has been achieved by targeting high-profile dissenters, like Salmaan Taseer, a governor of Punjab province, and Shahbaz Bhatti, a federal minister for minorities, who were both assassinated in 2011.

And then, just two weeks ago, there was the murder of Rashid Rehman.

They closed in on him as mafias do, from all sides. First there were encoded warnings in Urdu newspapers, describing a lawyer who was out to “hurt himself.” Then there was a press conference in Multan at which a group of stern-faced clerics accused Rehman of trying to make an international issue of the Hafeez case. In April, during Hafeez’s trial, three lawyers for the prosecution told Rehman in front of the judge that by the next hearing he “would not exist.”

Rehman’s colleagues at the human rights commission urged the government to provide him with security. They got no help. The ruling Pakistan Muslim League-Nawaz party has a history of placating extremist groups, like the Pakistani Taliban, to gain political mileage.

On the night of May 7, two young men walked into Rehman’s office near the district courts in Multan, shot him dead in front of his colleagues, and fled into the night. The next morning, almost every newspaper in Pakistan described them as “unidentified individuals.” But what killed Rehman can be identified: It was violent zealotry, aided and abetted by the state.

Ali Sethi is the author of The Wish Maker, a novel.