Last week’s attempt by the Palestinian Authority to obtain recognition from the United Nations Security Council has mostly disappeared from the world’s front pages. That is not true in Israel, though, where a new diplomatic war with the Palestinians is just taking shape.

As soon as the Palestinians lost the vote in the U.N., Mahmoud Abbas announced that the Palestinian Authority would seek admission to the International Criminal Court. If granted, the authority could then use that position to urge prosecution of Israeli soldiers for war crimes during the Gaza War. 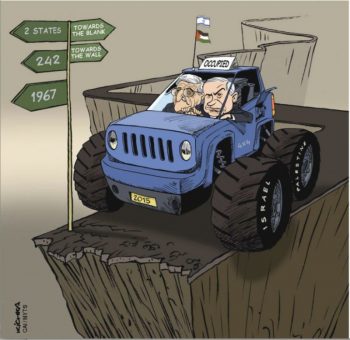 Israeli Prime Minister Benjamin Netanyahu has responded equally pugnaciously. While insisting that he will not “punish” the Palestinians by building in settlements (a move he knows would be toxic to the international community), the prime minister has said Israel will ask Congress to cut off the flow of the $400 million in annual aid that the Palestinians receive from the U.S. He has also said that Israel will not transfer the tax revenue it has collected on the Palestinian Authority’s behalf. Other measures, he has pledged, are forthcoming.

The ICC threat is worrisome to Israel for numerous reasons. By making alleged “war crimes” rather than the consistent Palestinian drive to destroy the Jewish State the subject of discussion, it allows the Palestinians to shape the narrative of the conflict in a way that does Israel great damage. It also means Israeli soldiers and commanders could be arrested and tried for war crimes when they travel abroad. In a tiny country in which travel abroad is, for many, virtually de rigueur, that is very worrisome. Netanyahu (who is running for re-election in a tight race) has vowed that he will not let it happen.

This reshaped conflict is precisely what Abbas wanted. Not only did he know he could not win the vote, but he apparently wanted it to fail. The version of the resolution France, Germany and the United Kingdom proposed stipulated that Palestine would be a nonmilitarized state; but the Palestinians put forward a draft that omitted that proviso, thus ignoring the issue of Israel’s security and ensuring an American veto.

Further indication that Abbas wanted the measure to fail was his timing. The Palestinians could have fared much better had they waited just a few days to bring the resolution to a vote.

Eight countries (Argentina, Chad, Chile, China, France, Jordan, Luxembourg and Russia) supported the resolution, while Australia and the U.S. voted against. Five countries (Lithuania, Nigeria, Rwanda, South Korea and the U.K.) abstained. Given that nine votes were needed for passage, the U.S. did not have to use its veto. But after the new year, when Angola, Malaysia and Venezuela replace Rwanda, South Korea and Argentina, respectively, the Palestinians would probably have had the nine votes. The U.S. would have been in the more uncomfortable position of vetoing, and the Palestinians would have been able to point to more compelling international support for their gambit.

Had they waited and submitted a version palatable to the U.S., they might actually have succeeded.

Why, then, did they act this way? One European diplomat remarked that this latest Palestinian move was simply another instance of their “never missing an opportunity to miss an opportunity” (a phrase coined decades ago by Israel’s Abba Eban). But this was no missed opportunity. Abbas did not want the resolution to pass because he knows that the Arab street is totally opposed. Indeed, some Arabs accused him of “high treason” for submitting a proposal that makes concessions to Israel; Anwar Sadat’s fate cannot be far from his mind. Hamas, Islamic Jihad, Democratic Front for the Liberation of Palestine and the Popular Front for the Liberation of Palestine have all decried the Palestinian Authority move at the U.N.

Abbas was much better off with the proposal dying an ugly death because the defeat enables him to use the ICC to indict Israeli soldiers, a move bound to infuriate Israel and rile up the Arab street rather than lead to negotiations.

Nothing sums up the Palestinian street better than comments made by Mahmoud Zahar, a co-founder of Hamas and still a member of its leadership, this week. “This Palestinian resolution is catastrophic and has no future on the land of Palestine,” he said. “The future belongs to the resistance. We will continue to work to liberate all the land and achieve the right of return for Palestinian refugees. Hamas will not accept anything less than all the lands that were occupied in 1948.”

For decades, the Palestinian leadership has preferred conflict to statehood. When the U.N. voted on Nov. 29, 1948, in favor of the Partition of Palestine (and thus in favor of the creation of a Jewish State), the land allocated to Israel was home to 500,000 Jews and 450,000 Arabs. It barely had a Jewish majority.

With the demographics almost equally balanced, birthrate differentials and the ease of encouraging Arabs from nearby lands to immigrate to this new state, Arabs could quickly have tipped the scales and created an Arab majority. There would have been two Arab states and no Jewish state.

But in 1947, the Arabs attacked Israel instead. The rest is history. If last week’s events are any indication, nothing much has changed.

Daniel Gordis, senior vice president at Shalem College in Jersualem, is author of Menachem Begin: The Battle for Israel’s Soul and The Promise of Israel. © 2015 Project Syndicate