This week marks 50 years since Israel captured the West Bank and the Gaza Strip in the June War, which cost thousands of lives and catapulted the Israeli-Palestinian conflict to center stage in the region. When reflecting on this anniversary, many will rightly focus on how little has changed since 1967. However, recent failures to achieve Palestinian self-determination have profoundly shaped the perspectives of young Palestinians.

Two Arab Barometer polls of the Palestinian public, conducted in 2006 and 2016, show how young Palestinians have lost faith in political institutions. Although the two surveys did not interview the same respondents, comparing the nationally representative samples enables us to track the evolving views of age groups. We directly compare each cohort with the cohort one decade older: For example, we discuss how 18- to 25-year-olds’ attitudes in 2006 compare with those of 28- to 35-year-olds in 2016. Here we will focus only on the men surveyed as these groups showed the most notable changes in opinions over time.

Cycles of losing trust in institutions

Both polls asked Palestinians questions to measure their trust in Palestinian institutions. In 2006, young men between the ages of 18 and 25 expressed the highest levels of trust in institutions related to justice, law and order: namely, the court system and the police. These young men were experiencing their “formative” transition to adulthood at a time that appeared to promise positive political change. Hamas had just won democratic elections by pledging to shake up the inefficient and corrupt Palestinian Authority (PA) leadership.

The young men’s high levels of trust in 2006 contrasted with those of their older peers. While 69 percent of the youngest age group expressed trust in the police, for example, only 39 percent of 36- to 45-year-old men did so. Many in the latter cohort had come of age during the First Intifada, or uprising, from 1987 to 1993. Though this was a time of great cohesion in the Palestinian national movement, it was followed by a roller coaster of hope and disappointment.

Optimism persisted through the creation of the PA in 1994, but hopes were subsequently dashed by the stalling of negotiations and the outbreak of the much more violent Second Intifada in 2000. All Palestinians felt this disappointment, but in 2006, it was most pronounced among those who had reached adulthood during the hopeful years of the First Intifada. 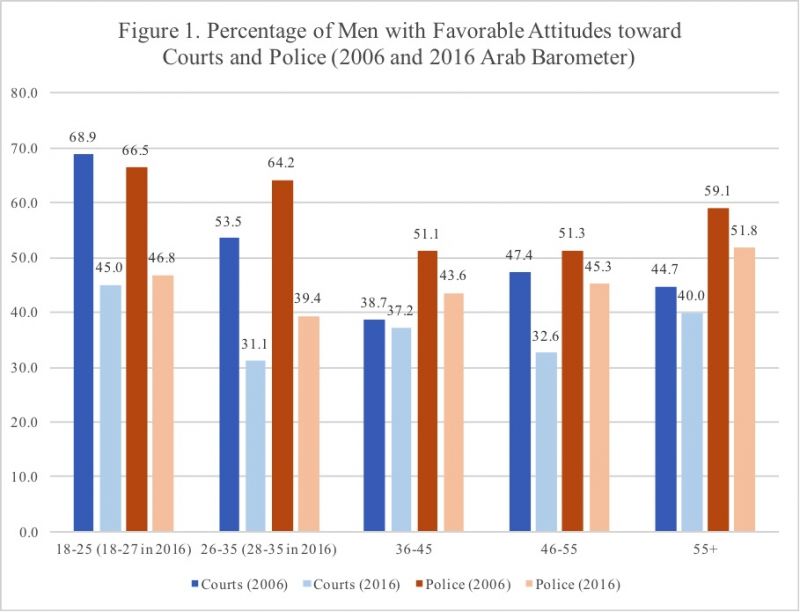 Ten years later, the youngest cohort of 2006 had become similarly disillusioned. By 2016, Fatah and Hamas had been governing the West Bank and Gaza separately for almost a decade; Israel and Hamas had fought a series of wars, devastating Gaza; Israeli settlement activity in the West Bank had continued to expand; and the peace process remained stagnant.

The First Intifada generation, whose members were in the 46-to-55 age group in 2016, saw trust in courts and the police decline further from their already low levels in 2006, but only slightly — from 39 percent to 33 percent in the case of courts. Presumably, by 2006, members of this cohort had already lowered their expectations.

Apart from these cohort-specific findings, the intense political distrust expressed by all age groups constitutes a serious obstacle to Palestinian political development.

In 2006, more than 83 percent of men, ages 18 to 25, were opposed to the Arab world accepting the existence of Israel as a Jewish state. Yet this group was also significantly more likely than the oldest cohorts of men to describe Israel as a democracy. Further, in response to a question about Palestinian priorities, this young cohort was more likely to prioritize economic and political advancement over ending the Israeli occupation. Only 23 percent said that ending the occupation is the biggest challenge facing Palestinians, while over 50 percent named either economic issues or corruption as the most important problem.

This combination of attitudes suggests that the youngest cohort in 2006 might have been more interested in some variety of a one-state, rather than two-state, solution. But in 2016, support for two states was fairly high, at 55 percent, among those who were by then a decade older. Interestingly, support for a two-state solution in 2016 was, once again, lowest among the youngest cohort. Only 42 percent of 18- to 27-year-old men expressed support, compared with nearly 58 percent of all other male respondents.

These comparisons indicate that opposition to the two-state solution may decline with age among Palestinian men. However, even if there is eventually progress toward a solution based on territorial compromise, the intense and widespread skepticism toward Palestinian institutions will require any future, independent Palestinian state to confront these legacies of distrust.